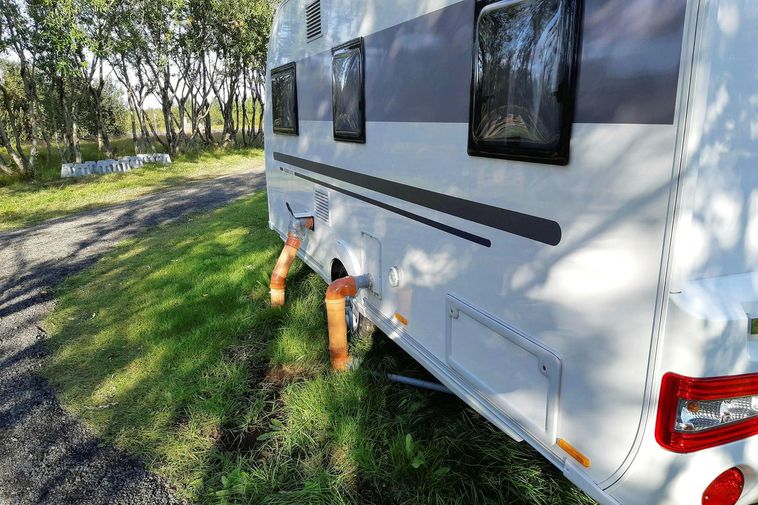 The RVs were connected to the area's sewage system without a proper permit.
Vala Hafstað
vala@mbl.is

Residents near Hella, South Iceland, keep fighting plans for the construction of a tourist service center on the property Leynir 2 and 3 – plans directed by Malaysian businessman and landowner Loo Eng Wah, Morgunblaðið reports.

RVs have been installed on the property and rented out. They have been connected to the sewage system of the area, causing alarm among residents, who fear for the quality of their water in a water protection area,. The residents believe the municipal council has failed to inform them of the extent of the project. They fear there may be plans to offer overnight accommodation on the property for up to 500 people.

The Rangárþing district zoning representative and building inspector, Haraldur Birgir Haraldsson, has insisted that the RVs be disconnected from the area’s sewage system. He tells Morgunblaðið he has already asked Loo Eng Wah to do so.

“He has no permit to connect the RVs to the sewage system,” Haraldur states. He adds that it is not the municipality’s to issue an operating permit for the RVs, but rather the South Iceland Public Health Authority’s.

The Rangárþing municipal council issued a temporary permit for parking the RVs, while a building permit will depend on zoning or land use plans, which are in process.

According to Haraldur, “Connecting the RVs to the sewage system is not permitted, and the decision of the municipal council to allow the parking of RVs was given on conditions detailed in the landowner’s application, asserting they would neither be connected to the water nor sewage system.”

According to this, Loo Eng Wah has not acted in accordance with statements made in his application. To Haraldur’s best knowledge, the landowner has responded to requests to disconnect the RVs from the sewage system.

Ásgeir Kr. Ólafsson, a spokesperson for cabin owners and landowners in the area, has sent a letter to Haraldur, asking for an explanation of what permits were given to raise steel frame igloos on the property, the construction of which has begun. Should permits not be in place, Ásgeir insists that construction be halted.

He also requests that all sewage and water pipes be removed. Ásgeir states he is appalled by the work practices of the municipal council, and he plans to seek the opinion of Minister of Local Government Sigurður Ingi Jóhannsson.

Loo Eng Wah runs the travel service company New Horizons ehf, which specializes in bringing Asian tourists to Iceland. He reports he has marketed Iceland in Malysia and that the number of tourists from there has increased considerably. Besides, he has introduced Iceland in Indonesia, Thailand and Vietnam. He notes that the purchasing power of Asians is increasing, making it possible for more and more Asians to travel to Iceland.