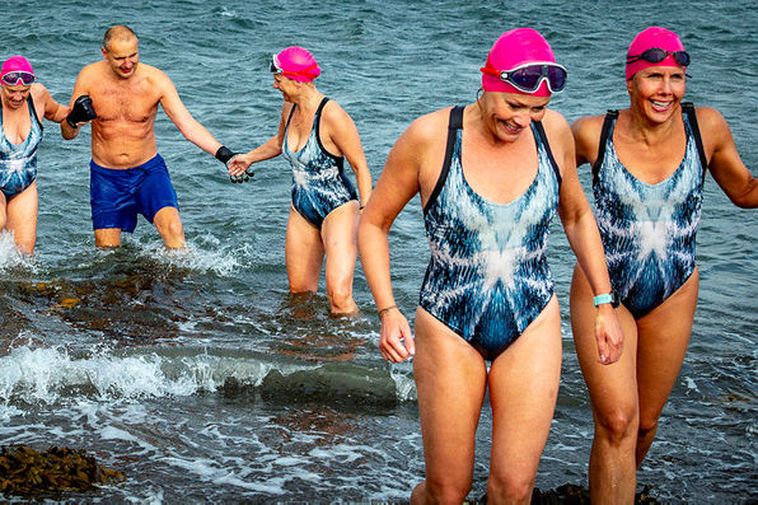 Swimming in the company of jellyfish is not something people generally do with a smile. Icelandic President Guðni Th. Jóhannesson, however, is the exception. Last night, he enjoyed their company in the ocean near his home at Bessastaðir, Álftanes.

These jellyfish, of course, are no ordinary ones. They are a group of Icelandic women, calling themselves Marglytturnar, meaning ‘the jellyfish,’ whose relay team will be swimming across the English Channel in September. Their goal is to bring attention to the declining flora and fauna of the ocean, due to pollution, and to the importance of protecting the ocean’s resources. They plan to collect donations in support of Blái herinn - an Icelandic environmental association, best known for its efforts to clean Icelandic beaches.

The English Channel is sometimes dubbed the Everest of the swimming world. Marglytturnar will be swimming from Dover, England, to Calais in France – a 34-km (21-mi) distance. Many swimmers end up swimming up to twice that distance, however, due to currents. The swim is expected to take 16-18 hours, and each team member will be swimming for an hour at a time.

The women began their swim last night from Ægisíða in Reykjavík and swam across Skerjafjörður fjord, toward the presidential residence. They were accompanied by two kayaks and a boat from the rescue team Ársæll. The president, being a good host, swam a short distance toward his guests and back to shore.

Marglytturnar are a team of six. One of them, Sigrún Þuríður Geirsdóttir, you may have read about recently, when she became the first woman to swim from Vestmannaeyjar islands to Landeyjasandur beach.