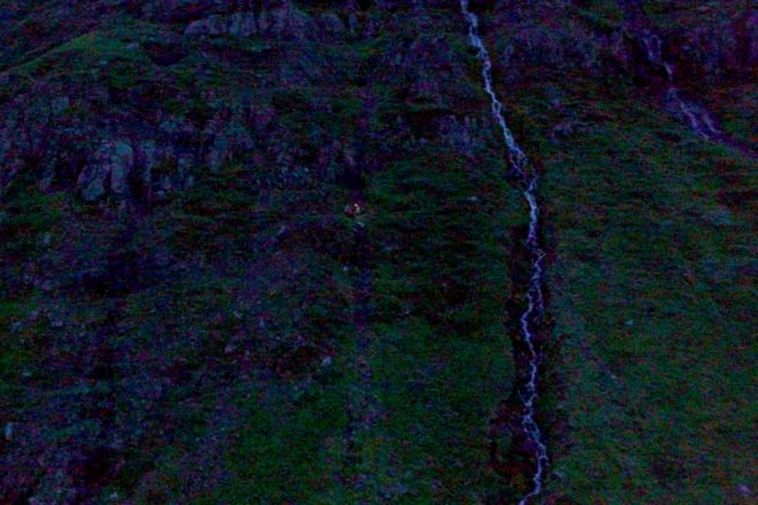 The light spot in the mountain shows the site of the accident. Photo/Ísólfur rescue team.
Vala Hafstað
vala@mbl.is

Thanks to an 84-year-old golfer, who heard her cries for help, the life of a Swiss woman in her early 20s was saved in Seyðisfjörður, the East Fjords, on Tuesday night. She was lying in a stream of water in a remote mountain area, unable to move, mbl.is reports.

The woman remains in intensive care at Landspítali National University Hospital, Reykjavík. She underwent back surgery early Wednesday morning, which, according to mbl.is, was successful, and she is reported to be on the road to recovery.

“I believe she would have died, if no one had heard her,” states Davíð Kristinsson, resident of Seyðisfjörður and rescue worker.

“There was an elderly man on the golf course, who thought he heard someone calling from the mountain,” Guðjón Már Jónsson, rescue worker tells Austurfréttir.  “He wasn’t sure, but went to see an off-duty police officer and told him he couldn’t just ignore it. They went toward the mountain, along with others and heard the sounds there as well. At that point, a rescue team was called out.”

This was at 10 pm, and night was falling. Drones were flown up to the mountain and rescue workers hiked up there, where they found the woman about 40 minutes later at an elevation of 150 meters, where she was stuck on a cliff, unable to move, exhausted and quite cold.

She was lying in a pool of water, unable to even lift her head out of the water. She had fallen off a cliff and tumbled down the mountain slope.

She was transported by ambulance to Egilsstaðir about half an hour after midnight and from there by flight to Reykjavík.

Davíð tells mbl.is that the woman was in intense pain when found. “No one was with her; there were no travel plans, or anything. No one missed her or was looking for her, which demonstrates the importance of giving notice before you go on such a hike, because this one could clearly have been her last.”