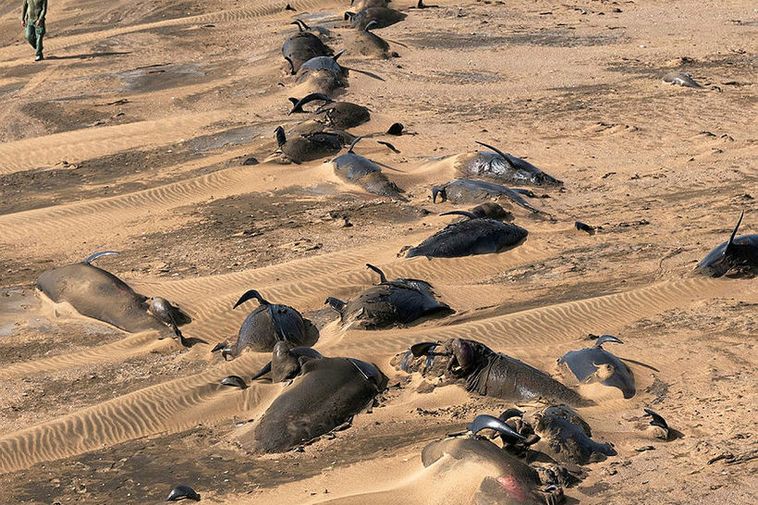 Over the weekend, Morgunblaðið photographer RAX photographed the whales from the air. Photo:RAX
Vala Hafstað
vala@mbl.is

Jónas Jóhannesson, farmer at Jörfi, near Löngufjörur beach, West Iceland, warns that visiting the area, where dozens of beached pilot whales were discovered last week, can be very risky. “People should not at all go there, unless they either have a guide or talk to people familiar with the area. The place can be dangerous,” he tells mbl.is.

The beach, on the easternmost part of the south side of Snæfellsnes, is in a remote area, accessible only on foot or by horse. To get there, a correct path must be chosen, which is only passable during low tide, and for a very limited period at a time.

For this reason, it has been hard for scientists to access the area to take samples from the carcasses, mbl.is reports. Two or three scientists from the Marine and Freshwater Research Institute plan to visit the area sometime this week. The Icelandic Coast Guard helicopter will transport them there, Gísli Arnór Víkingsson, whale specialist at the institute, tells mbl.is.

Gísli states this is probably the largest number of whales beached since 1986, when 148 whales beached near Þorlákshöfn. None of them survived. “Back then, it happened right next to the village, making the circumstances entirely different. The smell was a nuisance and, therefore, they had to be removed.”

The carcasses in Löngufjörur are rotting in the sand, and there are no plans to remove them. “When the waves of the Atlantic Ocean move in, it won’t take long for the carcasses to be dug in sand or to be washed out to sea,” Gunnar Gylfason, one of the landowners tells Morgunblaðið.