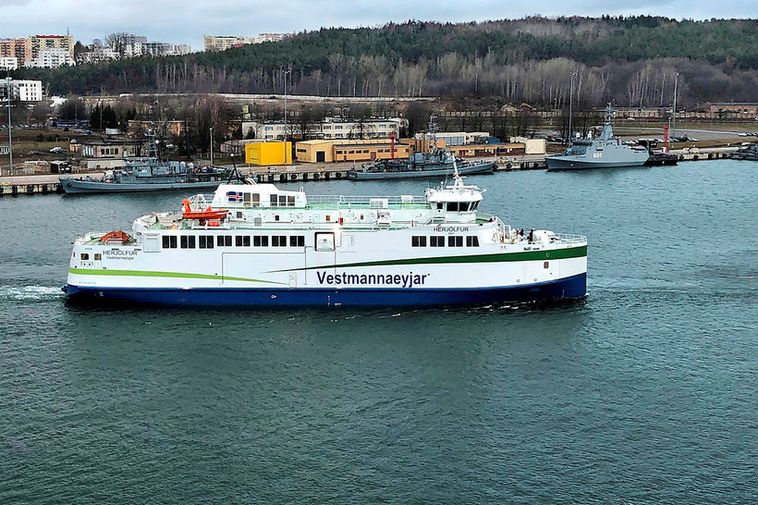 The new Herjólfur, sailing in Poland.

If all goes according to plan, a new ferry for Vestmannaeyjar islands will be delivered to its owner, the Icelandic Road and Coastal Administraton, in Poland on Sunday. The ferry, called Herjólfur, like the old one, will then arrive in Vestmannaeyjar on June 15. This was confirmed by Guðbjartur Ellert Jónsson, CEO for Vestmannaeyjaferjan Herjólfur ohf, Morgunblaðið reports.

“We expect the voyage to take us six days,” he reports. There will no doubt be festivities on Heimaey island when Herjólfur finally arrives.

The new ferry can sail in shallower waters than the old one, making it easier for it to sail to Landeyjahöfn harbor than was for its predecessor. The ferry ride to Landeyjahöfn, located about 80 km (50 mi) east of Þorlákshöfn, is only half an hour, compared to a three-hour ride from Þorlákshöfn harbor. See related article.

The vessel will be able to run on electricity, although it won’t do so solely to begin with, since equipment needed for charging it is not yet ready, mbl.is reports. Electrical towers will be built in the harbors, with arms extending to the vessel. In the meantime, it will operate as a hybrid.

The arrival of the ferry was substantially delayed, due to a dispute regarding the amount to be paid for changes to the original design. At the end of May, it was finally reported that the Icelandic Road and Coastal Administration had reached an agreement with the Polish shipbuilding company Crist to pay an additional ISK 200 million (USD 1.6 million; EUR 1.4 million) for the vessel.

The building of the ship was completed quite some time ago, but the shipbuilder had demanded EUR 8.9 million (USD 10 million) in addition to the original price. Crist refused to deliver the vessel until the additional payment had been made, whereas the Road and Coastal Administration, finding the demands unacceptable, came close to canceling the agreement. The agreement reached brings the total price of Herjólfur to EUR 31 million (USD 34.9 million).

You can watch the ferry being built here: