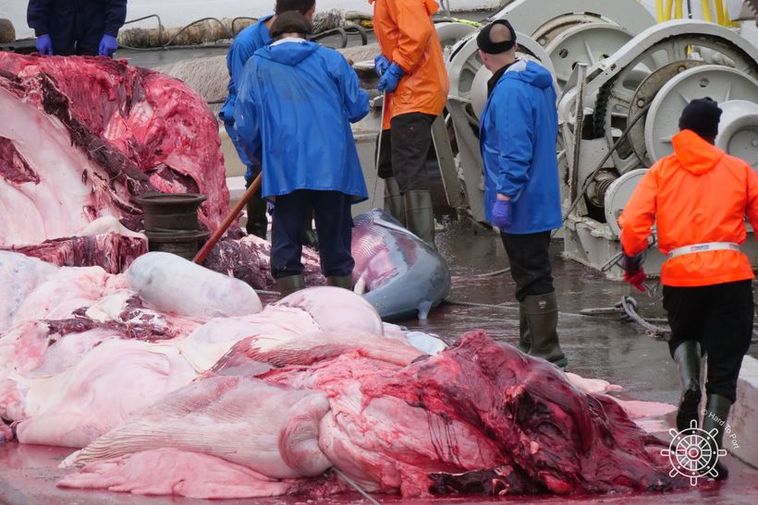 Animal rights association Hard to Port have accused Icelandic whaling company of hunting a pregnant fin whale.  Photos of the incident spread quickly on social media and a protest took place last night outside the premises of Hvalur hf in Hvalfjörður.

The press release from Hard to Port is as follows:

<p>The photos of a fin whale fetus that was dragged into the processing factory</p><em><span> </span></em><p>in</p><span> </span><em>Hvalfjörður were captured on</em><br/><em>Monday 20th August at 16.53 in the afternoon. The fetus whale was cut out of the body of the mother whale and was<span> </span><br/></em><em>quickly removed from three workers who were obviously nervous about this incident being captured on camera.<br/><br/>Arne Feuerhahn, CEO of marine conservation organisation Hard To Port who was on the scene with two other volunteers<span> </span><br/>from the Sea Shepherd Conservation Society:<br/><br/>"It felt like the working staff had some concerns about dismembering the body of the 89th fin whale of the hunting season.<span> </span><br/>When they cut open the amniotic sac of the mother whale, the fetus just fell out of the body. It was absolutely horrific to witness this."<br/><br/>The news about this incident quickly spread on social media. Icelandic activists and members of the public have organized a<br/>protest at 20.30 this evening (<span class="aBn" data-term="goog_1698314150"><span class="aQJ">Monday</span></span><span> </span>20th) at the whaling station in<span> </span></em><em><em>Hvalfjörður</em></em>