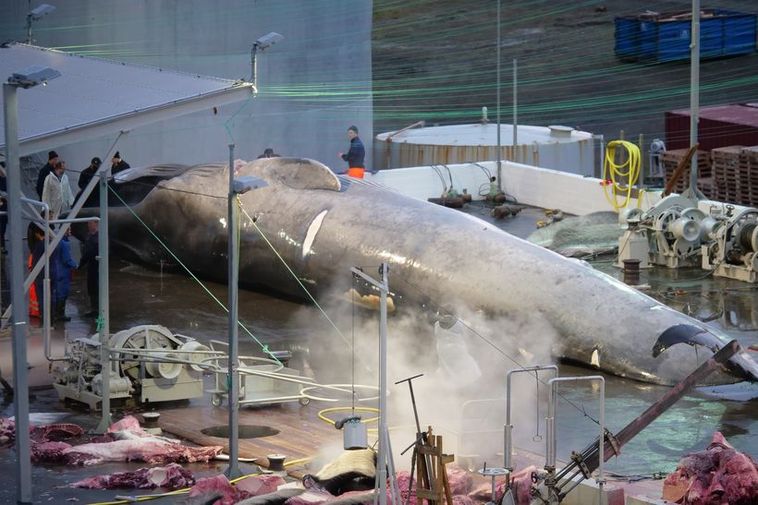 The controversial whale turned out to be a hybrid. Photo/Hard to Port

The whale caught by the Icelandic whaling company Hvalur hf. on July 8th is a hybrid. This is the result of DNA analysis. According to the result, the whale is the offspring of a female blue whale and a male finback. The hunting of hybrid whales is permitted in Icelandic waters, whereas the blue whale is a protected species.

“This did not come as a surprise to us,” Þorsteinn Sigurðsson, spokesperson of the Icelandic Marine and Freshwater Research Institute, told mbl.is. This is not the first time such [a whale] is detected, but in light of all the discussion, nationally and abroad, we deemed it right to expedite the analysis to confirm it.” He added that the part of the whale that was visible at the surface had all the characteristics of a finback.

Kristján Loftsson, CEO of Hvalur hf., agrees: “This is in line with what I have said before. It was clear, and there was never any doubt about it … Our whalers know the difference between a finback and a blue whale. The two look very different in the ocean.”

The catching of the whale received international attention and criticism after Hard to Port, a non-profit organization dedicated to ending commercial whaling in Iceland, posted a picture of the whale on its Facebook page, suggesting that it was a rare hybrid whale with the features of a blue whale.

Hvalur hf. resumed the hunting of finbacks this summer after a two-year break. The hybrid causing the controversy was the 22nd whale caught this summer. Since 1983, five hybrids between a finback and a blue whale have been caught in Icelandic waters, four of which have been landed.