What‘s with this Harpa? 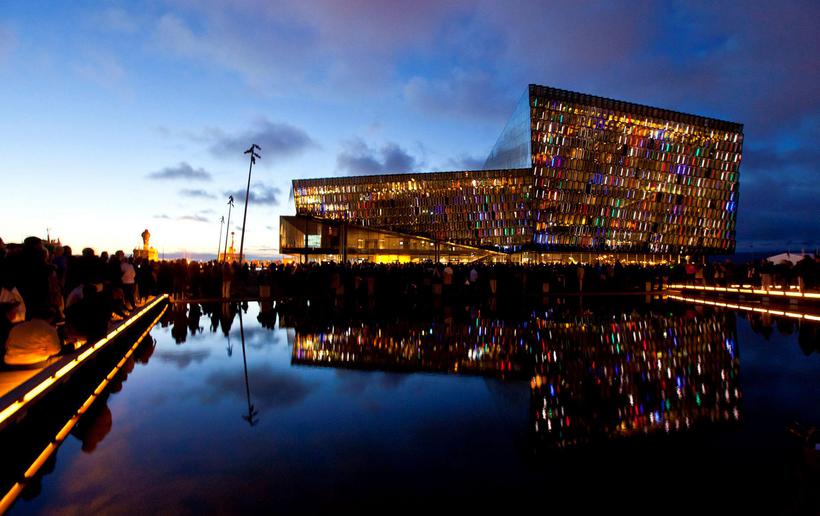 The Icelandic nation had for a long time a troubled relationship with Harpa. It was supposed to be a gift to the Icelandic nation from one of Iceland’s biggest banks. When the construction work had just started, 2008 happened. A financial collapse that hit Iceland particularly hard, because of the Icelandic banks.

The building had to be finished, and was payed for by the state in dire times when money was needed for pretty much everything else. Tax payers were not all that happy.

Today, nine years later, most Icelanders are at peace with Harpa. It is indeed a culture house for the nation with events ranging from electric music festival (partly held in the underground parking lot), plays for tourists and kids, opera, heavy metal concerts and last but not least, the Iceland Symphony Orchestra. It also hosts Design March and a seasonal food market.

Harpa manages to put on many faces, to be a platform for events for pretty much every angle of society. 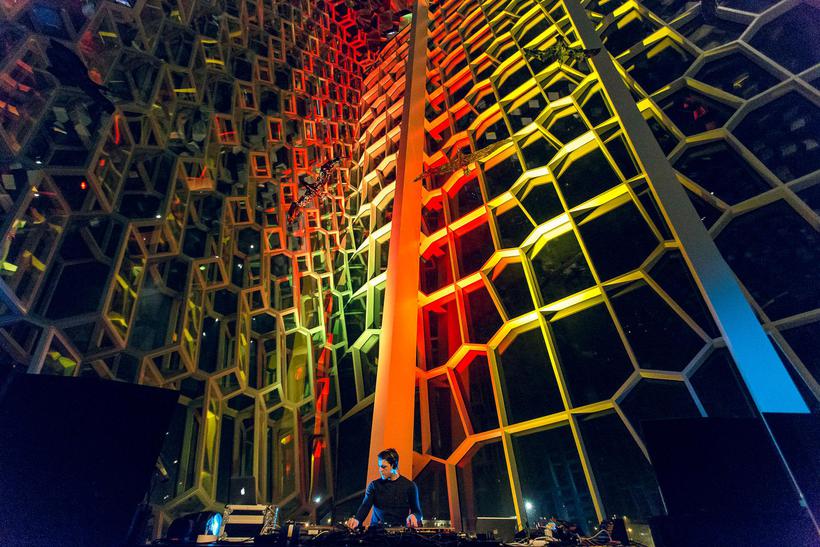 Two great restaurants with very different atmosphere, and a good happy hour don’t spoil it for Harpa either.

The name is a reference to the Danish Smørrebrød, open faced sandwiches which have for years been popular in Iceland. The restaurant takes this traditional food, put’s a bit of an Icelandic twist on some, modern twist on others. Most of it is just well bade traditional food with great ingredients. The atmosphere is laid back, and even though the surroundings are beautiful and the food delicious, the price is reasonable.

If you’re passing by Harpa in the afternoon and not all that hungry, Smurstöðin is still a lovely stop. The happy hour is from 16-18, with decent wine and beer on a very affordable price, in this beautiful building.

Smurstöðin is located on Harpa’s ground floor, with the mirror roof above, and great windows all around where guests can admire the city buzzle in Reykjavik from a bit of a distance. 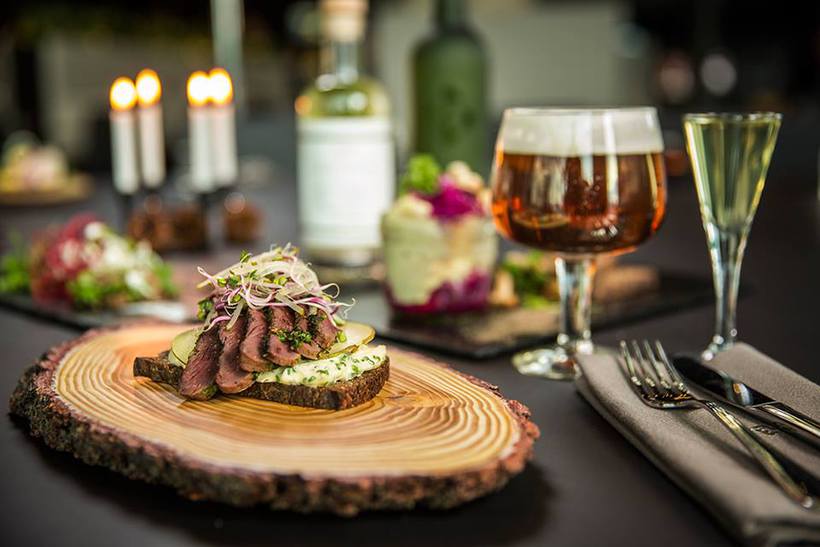 The food at Smurstöðin is inspired by Nordic traditions. Photo: Facebook/Smurstöðin

One of the best dishes I have ever tasted, I got at Kolabrautin. It was butternut squash with ricotta and truffles, on last Christmas’ menu. The rest of the meal was delicious, but there was something about this one dish, perhaps because it was so simple and truth be told I was sceptical about it being vegetarian. After proving me so irrevocably wrong, the chefs at Kolabrautin have my full respect.

Located on Harpa’s fourth floor with a view over the ocean and the centre of Reykjavik in this beautiful building, there are few restaurants that can rival Kolabrautin’s surroundings. 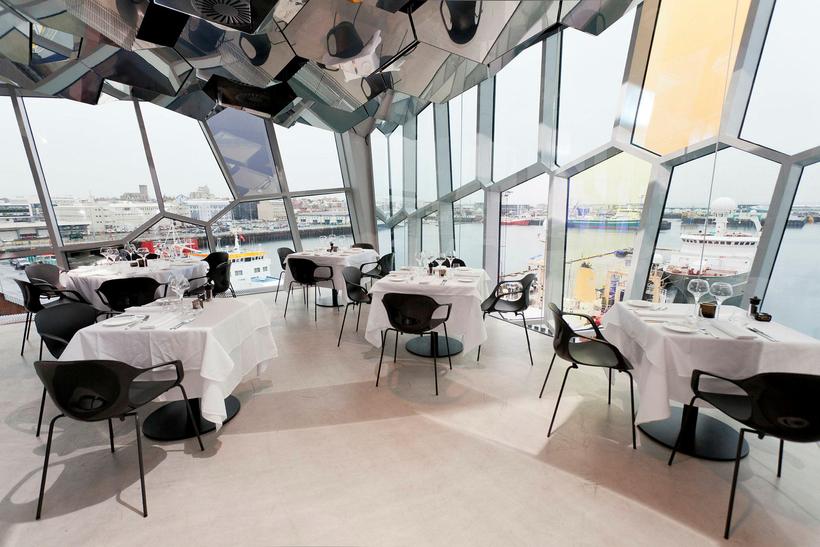 The view from Kolabrautin is nothing short of stunning. Photo: Iceland Monitor/Sigurgeir Sigurðsson

A work of art, litterally

One of Harpa’s most striking features is the South façade, which faces the centre. The entire wall is set with hexagonal class tubes that lean a bit forward. Standing under it, it reminds you of a great wall of columnar basalt, not an uncommon sight in Iceland.

Here and there, there are panes of coloured glass and in façade. They are not obvious, and change depending on where you stand and how the light hits it. This makes the overall look of Harpa very different in the everlasting days in summer, and the long dark nights of winter.

The wall has led lighting built into it, which are lit when the natural light is low enough for it to be visible. It changes Harpa into a great canvas where all sorts of colour can be displayed upon it.

This is the brainchild of Danish/Icelandic artist Ólafur Elíasson. He designed the south facade, and developed the principle for the remaining north/east/west facades and roof (which have a pattern of the outstanding south façade) in collaboration with Henning Larsen Architects and Batteríið Architects. 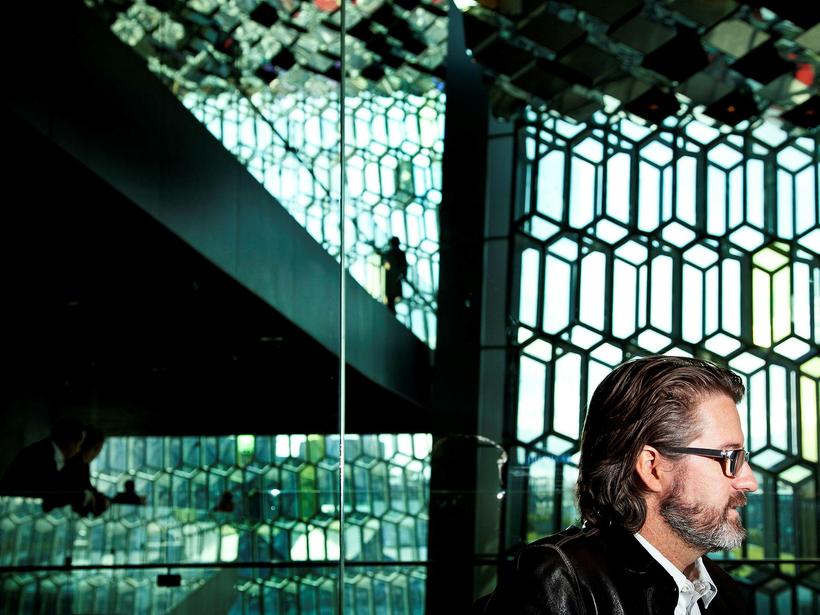 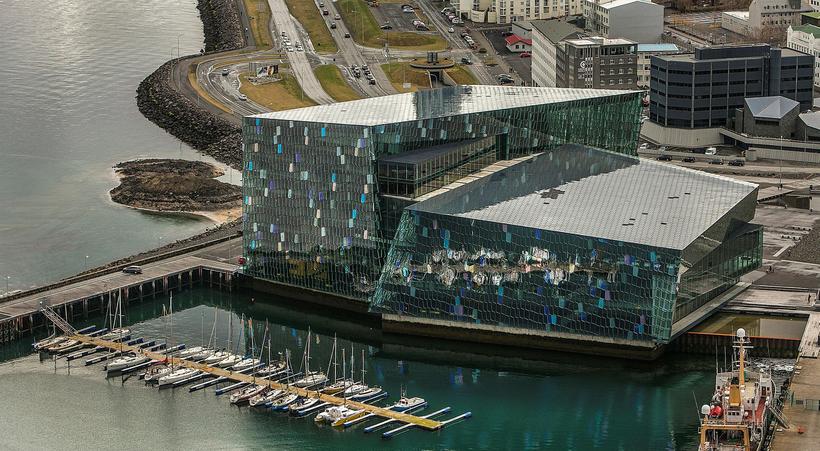 The colour of the glass changes depending on the natural light and where the viewer stands. Photo: Iceland Monitor/Árni Sæberg 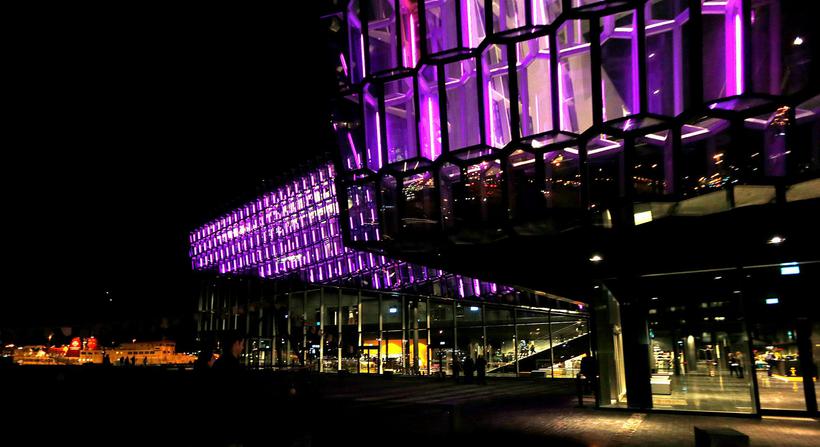 Harpa is often lit up in colours to show support for a certain cause, like pink for breast cancer awareness. Photo: Iceland Monitor/Eggert Jóhannesson