Reynisfjara beach death: Woman was pulled down by a wave and sucked along in undertow 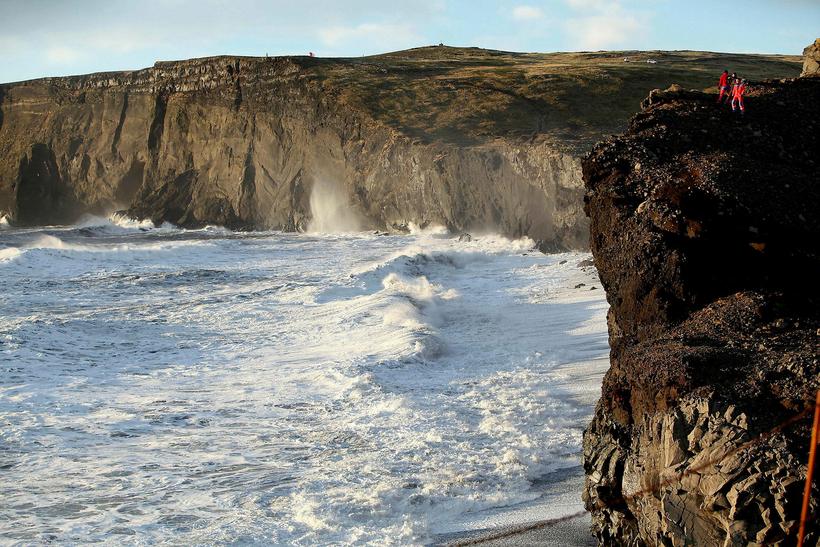 There are three signs at Dyrhólaey warning of the dangers of going near the waterfront and walking paths are chained off. mbl.is/Jónas Erlendsson

The woman who drowned at Dyrhólaey next to Reynisfjara beach yesterday had gone with her husband, her son, in his twenties and a fourteen year old daughter down to Kirkjufjara beach which forms a part of Reynisfjara.  A large wave knocked her son over and then knocked the woman over and got pulled out with the current. Her son managed to get back to the beach.

This information was released in a statement by the South Iceland police who are investigating the incident.  Police state that the waves were very changeable, some came up very high and others low. The father and her two children got back to safety but the woman was carried out to sea and was found around an hour later washed ashore east of Dyrhólaós. Resuscitation efforts were tried but were unsuccessful and the woman was declared deceased soon upon her arrival at the Reykjavik University Hospital where she had been taken by helicopter.

Her husband and children were transported via ambulance to Reykjavik but were all unharmed. They are being looked after by staff at the German Embassy as the family were German tourists.

There are signs in three languages other than Icelandic at Dyrhólaey warning of the dangers of powerful waves. Walking paths are marked off with chains to keep people away from the area. As we reported earlier, the whole beach at Kirkjufjara is now being closed off.