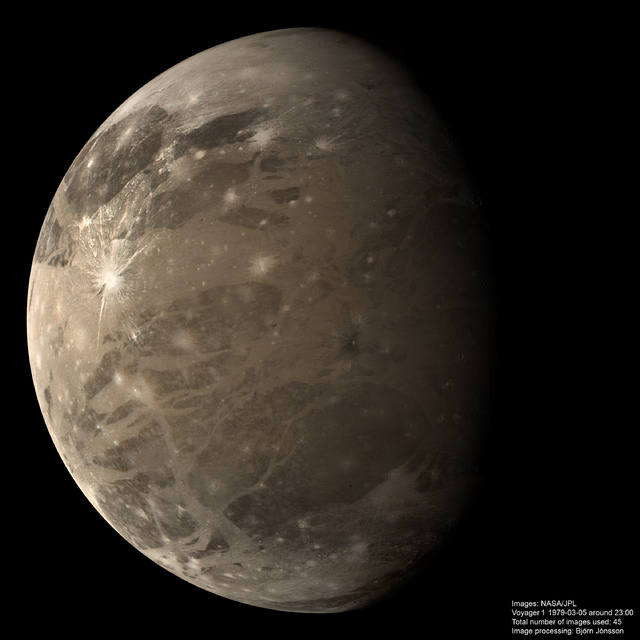 This mosaic of Ganymede was made using 45 images obtained by Voyager 1 on March 5, 1979 over a period of about 2 hours. The image is in approximate true colours. Image by Björn Jónsson

Software developer Björn Jónsson has received international acclaim for processing images  from the Voyager missions. His latest feat is a mosaic of Ganymede, which sheds new light on this largest moon of Jupiter.

The Voyager Interstellar Missions brought incredible images of our solar system back to earth in the 70's and 80's. Among these images were the first of Uranus and Neptune. Since then there have been great developments in image processing and Jónsson is the developer of the IMG2PNG software wich batch-converts spacecraft image data to PNG format.

His website contains simulated views of other planets produced using image maps generated from space image data. Jónsson has previously mapped out the surface of Europa, another of Jupiter's moons, of Uranus, and of Jupiter's great red spot.

The greatest problem Jónsson encountered when making the mosaic of Ganymede was that some of the source images were smeared. In a blog post on website Unmanned Spacflight.com he explains, "This happened because the intense radiation in Jupiter's magnetosphere affected Voyager 1's computers and clock. As a result some of the images were taken when the instrument scan platform was moving. It's difficult to make a full color global mosaic without using some of these smeared images.“

Following feedback he received from the image processing community, Jónsson managed to successfully deconvolve the images, making it possible to use them.

The maps created by Jónsson are in approximate true colour. The seventeen frames were each created using three images taken in different spectra of light. However, says Jónsson, not quite all the source images were in colour. In those cases he was forced to "cheat" and apply his own colouring to small areas.