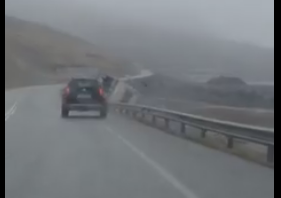 The video taken on a mobile phone shows the terrifying moment when a camper van blew off the side of the road in Iceland. Screenshot/ video by Sesselja Anna

A camper van was blown off the road in Kjalarnes, around 30 minutes from Reykjavik yesterday morning. The terrifying incident was caught on film by people driving behind it.
"We were driving a small Corolla, which wasn't blowing anywhere but we could feel the gusts of wind tugging at the car. Dad noticed the camper van in front of us and said that he would need to stop soon as the van might be run off the road due to the wind. That's why I got my phone out to record it, because I didn't believe him."
As soon as the camper van blew off to to the side of the road and overturned, people immediately stop to call for help and to aid the driver, who emerged almost unscathed by the incident.