The dangerous and unpredictable waves at Reynisfjara. Mbl.is/ Rax

It's a cold, clear and beautiful day in South Icleand today and today, like every other day, tourists flock to the magnificent black sands of Reynisfjara beach. The waves, which seem harmless enough, took yet another life this morning, the life of a man travelling with his wife.

The ocean didn't look very dangerous either one sunny day in May 2007 when a 75-year-old-woman from the US,  travelling to Iceland for the fifth time, also drowned there.

The Chief Inspector of the South Iceland police Sveinn Rún­ar Kristjáns­son, says that action needs to be taken immediately. Only yesterday, speaking tó Rúv national radio he stated that manned security was needed at the beach. " Reynisfjara is a popular place and not everybody comes with a tour guide,” explains Sigurðsson. “I don’t like rules and regulations, but if warning signs are not enough, then the next step is looking into some sort of safety supervision," he said yesterday.

Speaking to mbl.is Kristjánsson points out that in light of ever-increasing tourist numbers to Iceland, security in popular spots needs to be heightened. "Not just in Reynisfjara, but in all the big tourist spots. We can't ignore the fact that we now have an incredibly large number of tourists in the whole of Iceland. Many of those areas are here in South Iceland and many of them are dangerous if people are not careful. Yes, we must to something right now." He adds that the policeforce cannot take on the matter. "We are understaffed and can only respond to emergencies." He also doesn't think that the SAR teams should take on this role. "They have another role here in Iceland, they're not supposed to play security at tourist spots. We have to stop talking about doing something and start taking action. And someone needs to pay for increased security measures, and it's the role of the government and our politicians to get these matteres sorted out."

He also states that the tourist industry in Iceland is not just to blame because many tourists travel to Iceland independently, without a guide. "And most of the people within the industry are very concise and correct on these matters." 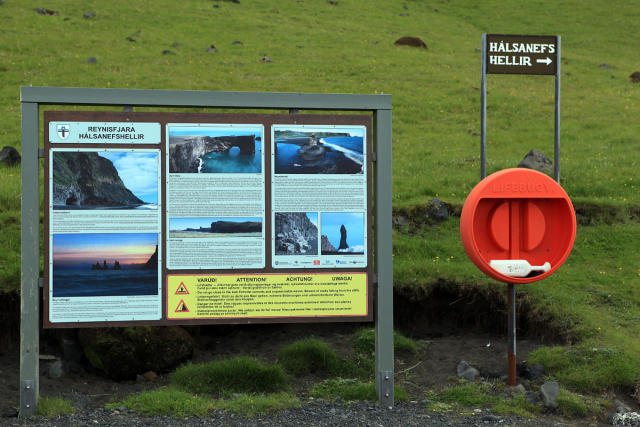 The current signs at Reynisfjara warnng of the dangers. mbl.is/Jónas Erlendsson

In 2007, as previously mentioned, a 75 year old lady from the US drowned at Reynifjara beach. Her family witnessed the accident, and were part of a group of 17 Americans on a coach from Kynnisferðir. The group were at the beach on a calm day and the ocean certainly did not seem likely to send a fatal wave to the beach. But it did.

The guide, walking with the group down to the beach has warned them about the waves. "The guide stood at the beach warning people not to walk towards a cave which is there. Then he heard screaming and shouting. He sees that a woman has been knocked over by a wave and then sucks her out to sea," says Sigríður Ásta Hallgrímsdóttir, head of resources at Kynnisferðir speaking to mbl.is today. "Two men jumped in after her  but were almost in peril themselves. They couldn't reach her. "

Another frightening event occurred in August 2013 when a four-year-old girl, visiting the beach with her father and sister, suddenly ran to the border of the ocean. Guide Páll Jónsson at Experience Iceland describes the moment. "She went right down to the tideline as the waves retreated. It was just a matter of moments before they would take her out to sea. It seemed as if the ocean hesitated for a few seconds and everything was still. "I ran as fast as I could and grabbed her before the ocean engulfed her," he says. He is certain that if he hadn't whisked her up she would have drowned.

Over the last few weeks, many photographs have been published on social media showing tourist playing a dangerous game on the  beach. Signs are up on the beach but people still play around at the water's edge.

In 2013, several tourists were in grave danger west of Vík in Mýrdalur at Easter 2013 when a wave caught them, an event caught on film. 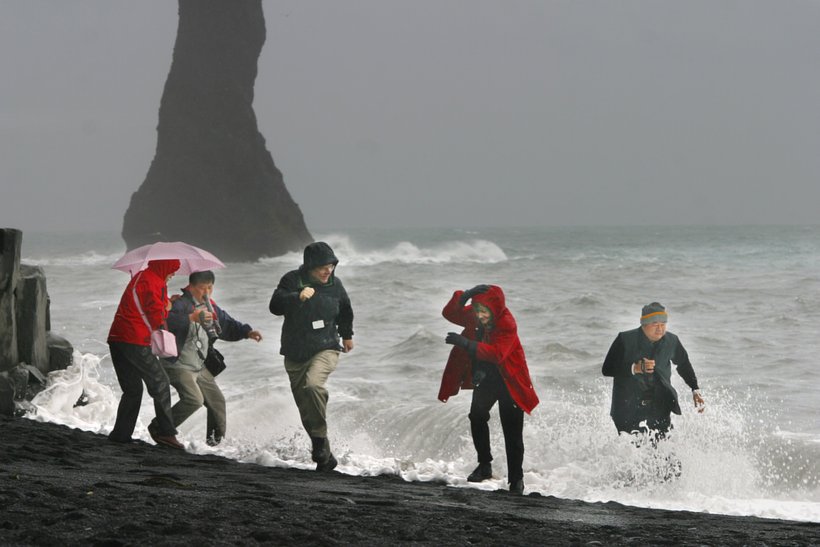 Tourists running from the waves at Reynisfjara. mbl.is/Rax / Ragnar Axelsson