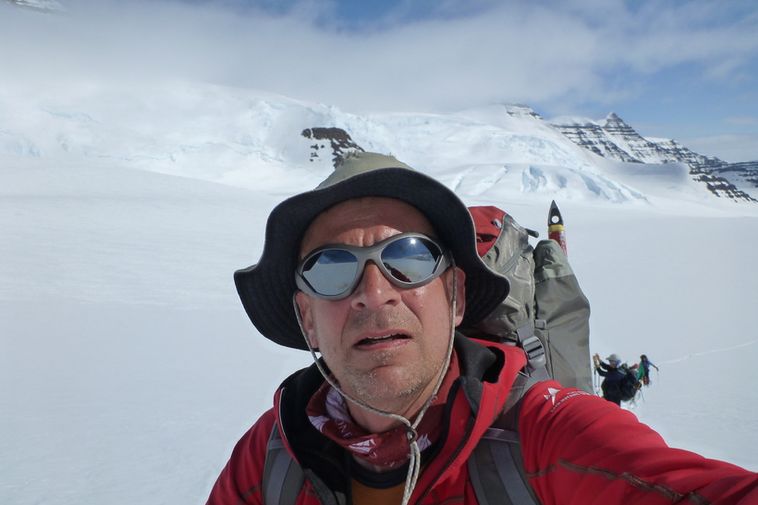 A record number of Icelandic cross-country skiers will cross the Greenland ice sheet in the coming weeks, mbl.is reports. Those include mountain guides Einar Torfi Finnsson and Vilborg Arna Gissurardóttir, who each lead their own team, going in opposite directions.

“We’ll probably meet east of the center, close to the highest point of elevation,” Einar Torfi told mbl.is before leaving for Greenland. He’s the leader of a group of six, who began crossing the ice sheet from east to west on Thursday, while Vilborg began her journey a week earlier from west to east. Vilborg, along with Brynhildur Ólafsdóttir, leads a group of eight people. A total of 14 Icelanders will, therefore, be crossing the ice sheet.

Vilborg Arna and her group on the west coast of Greenland:

The route is 550-km (340-mi) long, and the crossing is expected to take 21 to 24 days, Einar states. His team will bring supplies for 30 days. All the participants are quite fit and have comparable prior experience. This will be Einar’s fifth time crossing the ice sheet. The first time he did so was 26 years ago. Since then, he has noticed major changes at the edges of the glacier. “The glacier has retreated and become much thinner,” he states.

When asked why he chose to cross from east to west, he responds, “Doing it this way felt more logical, having the starting point close. Besides, the katabatic [i.e. downslope] wind will be at our back for a longer time, and this saves us the trouble of starting by crossing a glacier tongue.”

Below, you can watch a video of Einar’s first journey across the ice sheet. The group will be blogging on inReach, where you can follow their adventure.