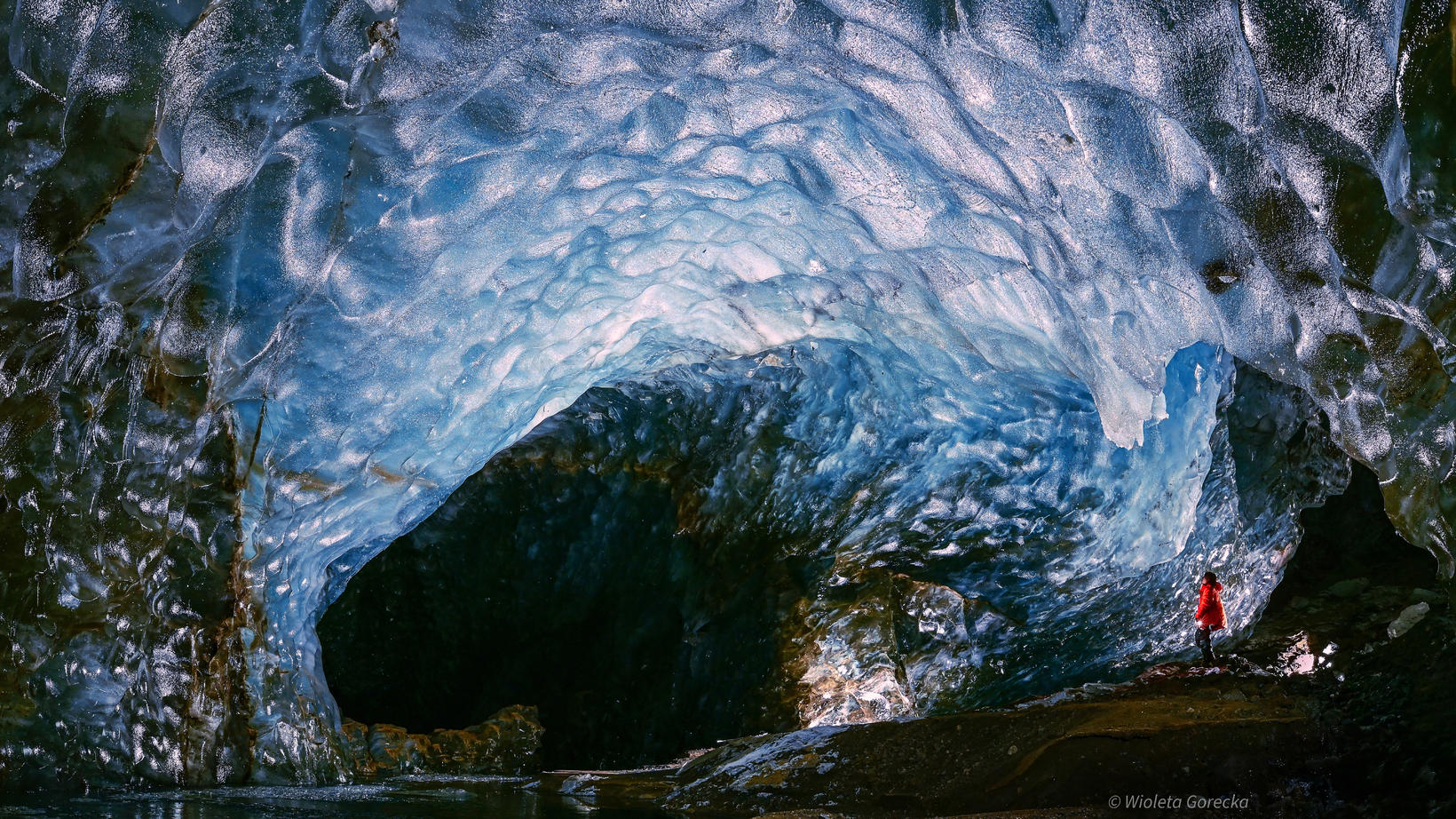 Earlier in the fall, a new and unusually large ice cave was discovered on the east side of Langjökull glacier in Iceland, mbl.is reports.

Subsequently, employees of the tour operators Amazing Tours and Sleipnir Tours started improving access to the cave; they made sure ice wouldn’t collapse from the ceiling; and they designed and installed lighting. The cave is too large and deep for headlights alone to suffice to illuminate it. 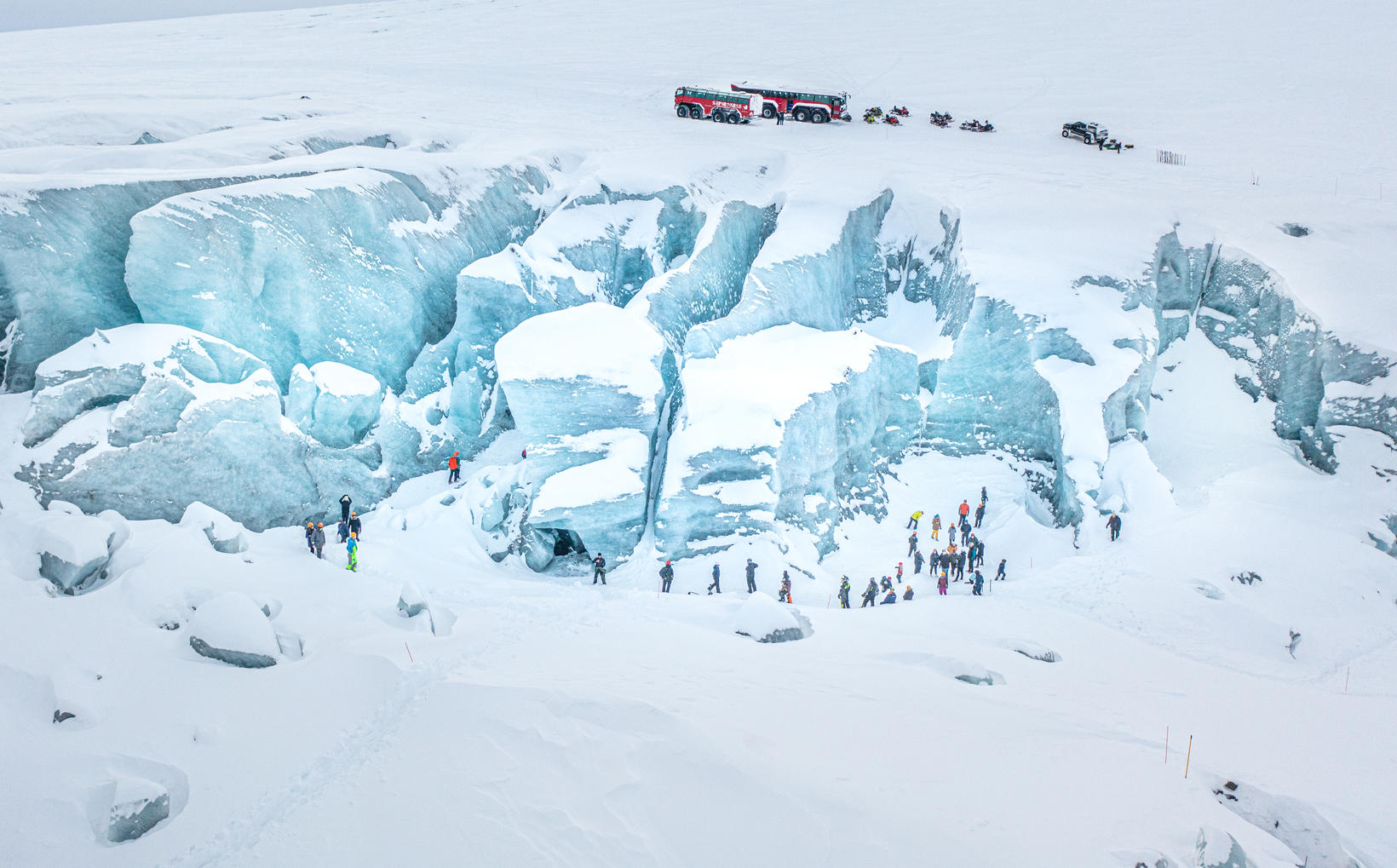 Jón Kristinn Jónsson is co-owner and managing director of Amazing Tours. Last year, the company purchased the operation of a snowmobile rental on the southeast side of the glacier from Arctic Adventures. Its employees have been looking for new ice caves in this area for a long time.

The search paid of in the fall on Suðurjökull, an outlet glacier from Langjökull glacier. 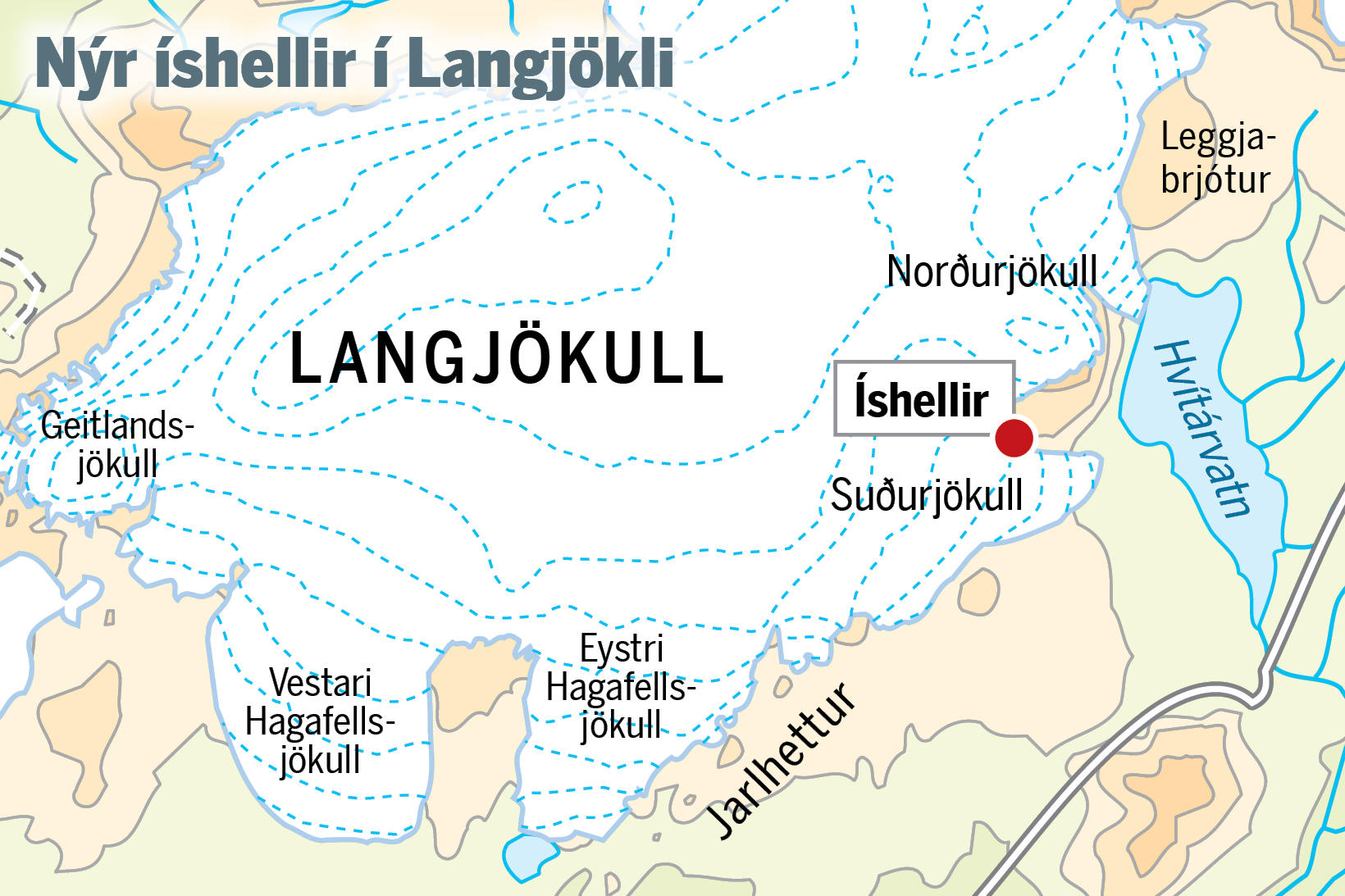 The red dot shows the location of the ice cave. Map/mbl.is

“We discovered an enormous ice cave area,” Jón Kristinn states. At first, they found a few tiny caves into which tourists could be taken without any changes having to be made to the caves. “But then we discovered this large space,” he adds. “Anyone who’s been there has been spellbound.”

Two weeks ago, the companies began taking tourists to the cave in small groups, and last week, they took people in the travel industry on a promotional tour there. The reaction was very positive, and many among them posted pictures from the visit on social media. 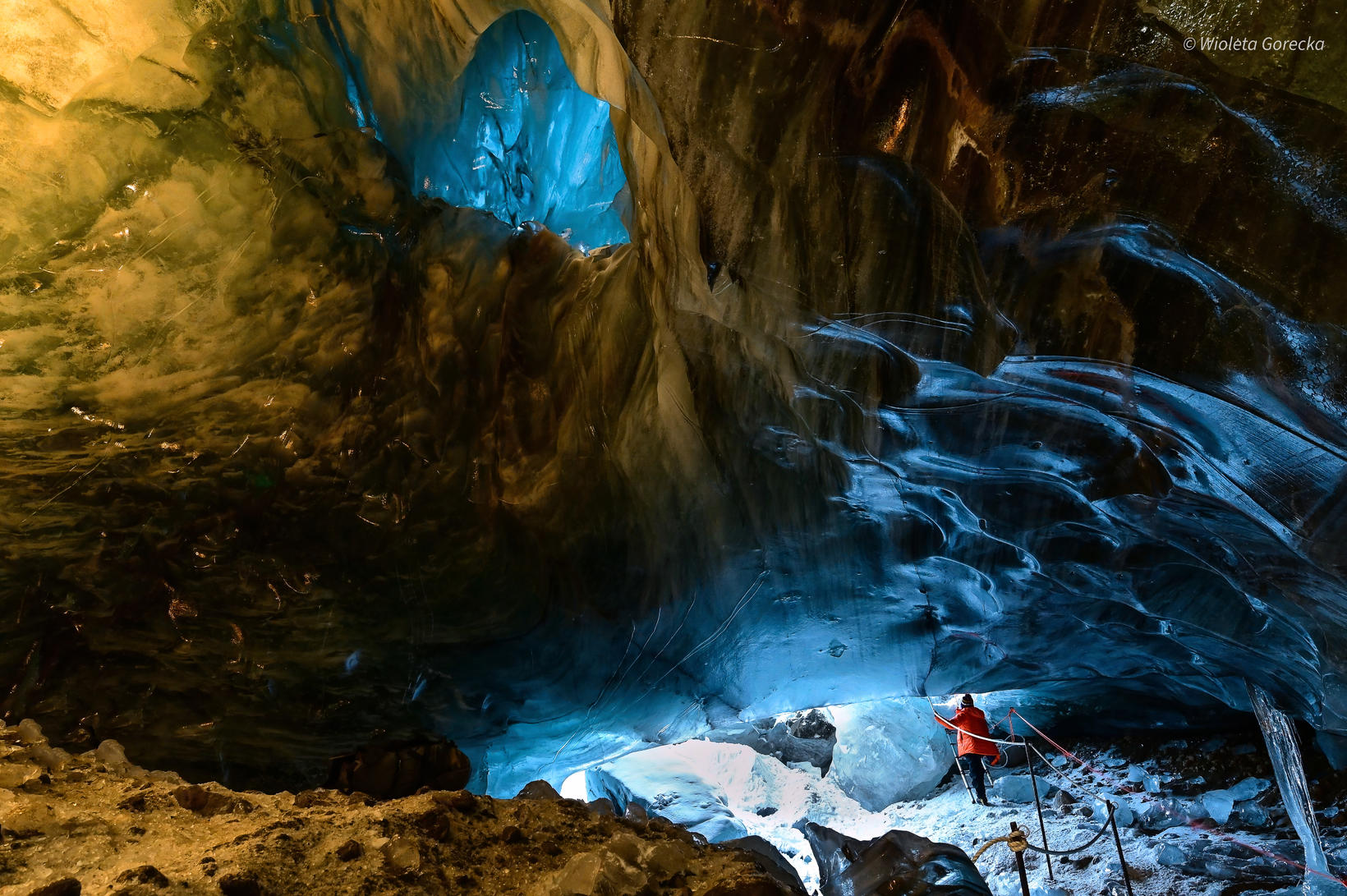 When describing the cave, Jón Kristinn states that its magnificence lies in its dome. Once you enter the cave, you first walk through a 15-m-long (50 ft) hallway, at the end of which you reach some sort of balcony. From there, you look into the cave, which is on two levels, one of which is easily accessible, the other one less so. Not only is the ceiling high, but very colorful as well. 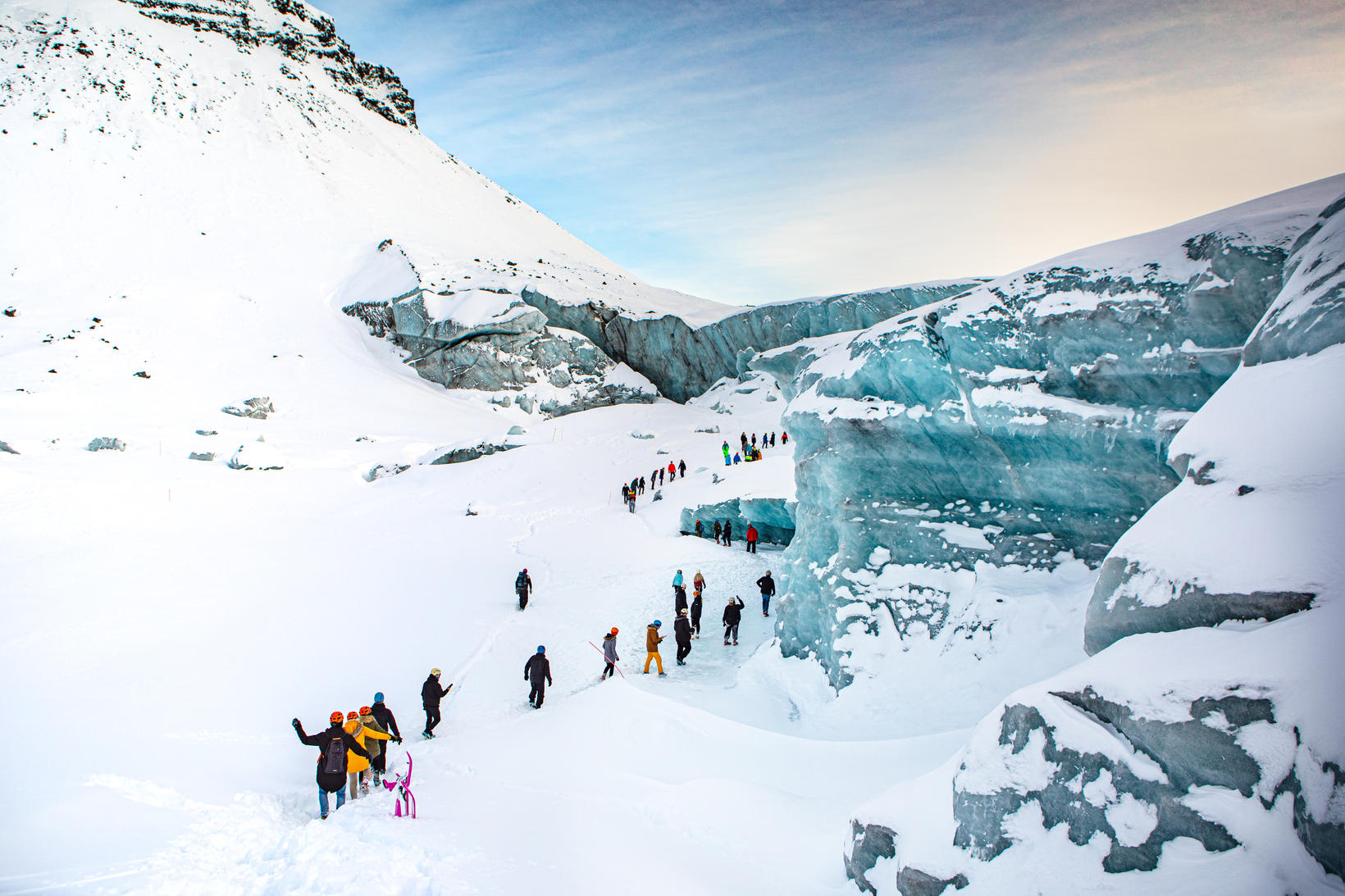 
“I can’t assert that this cave is the largest one ever found,” Jón Kristinn states, “but I’ve worked as an adventure guide for 12 years, and it is the largest one I’ve seen, and everyone else working in the field agrees that it is.” His guess is that at the upper level it measures 40-50 meters (130-160 ft) in width and 60 meters (about 200 ft) in length. “It’s much larger once you’re [on the lower level],” he adds.

Amazing Tours and Sleipnir Tours offer a total of three tours to the cave a day. In general, ice caves can be visited from mid-October until early April.

The cave is at an elevation of 800 meters (2,600 ft). Jón Kristinn strongly advises against going there without a guide, since the route there can be dangerous

Tying the knot in an Icelandic glacier cave