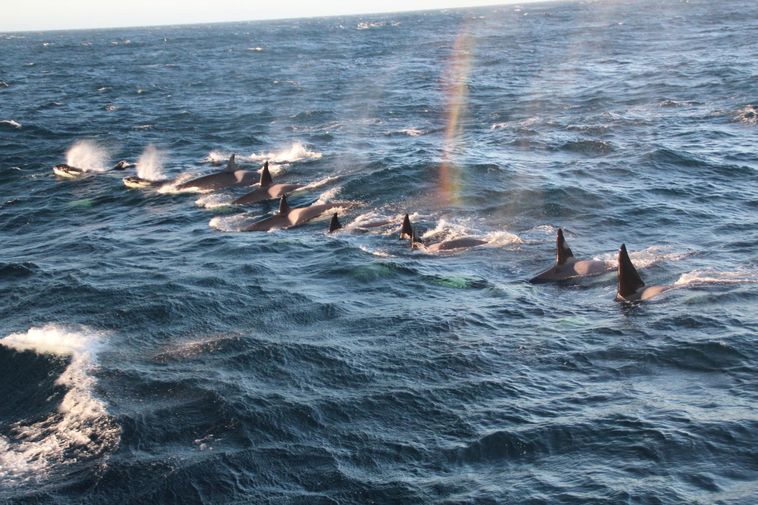 There has been much action east of Iceland lately, where fishing boats are busy catching herring, Morgunblaðið reports. Humans are not alone in their hunger for herring. Killer whales, or orcas, are just as eager to take part in the feast. The picture above was taken in Héraðsflói bay, the northernmost of the East Fjords, last week.

Pods of killer whales commonly follow fishing boats, forming a straight line, ready to catch anything that comes their way from the boats.

The killer whale is the largest member of the dolphin family and the ocean’s top predator, according to fisheries.noaa.gov. They often use a coordinated hunting strategy, working as a team like a pack of wolves.

According to the website of the Icelandic Institute of Natural History, killer whales stay in relatively steady family units, which sometimes join others temporarily, such at herring fishing grounds.

Their population around Iceland counts between five and seven thousand animals. Interestingly, the life expectancy of killer whale cows by far exceeds that of bulls, being 80-90 years, as opposed to 50-60 years for bulls. The cows become sexually mature at the age of 10, while the bulls must wait until 16 years of age. The bulls grow to be up to 6 meter long (nearly 20 ft) and the females slightly shorter.