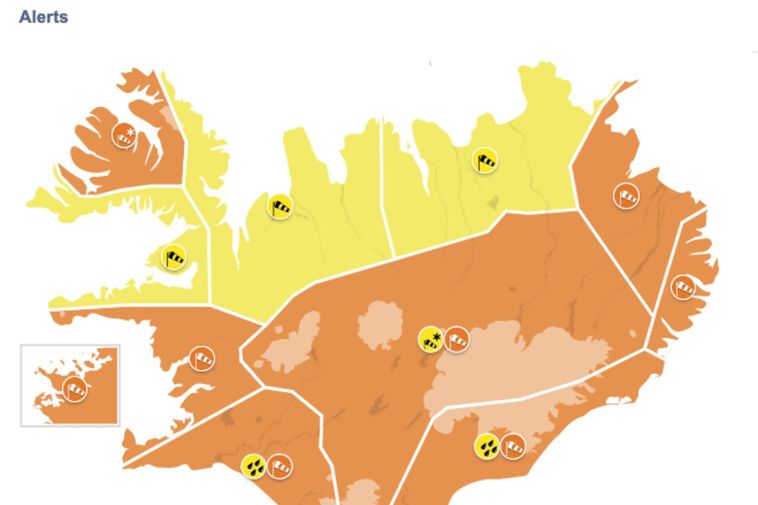 The Icelandic Met Office has issued orange weather alerts for most of the country today.

In the capital area, an orange warning will be in effect from 1:30 pm until 5 pm. A northwesterly gale or severe gale with rain is expected, with violent wind gusts by mountains and tall buildings. Residents are advised to secure their neighborhood.

In South Iceland, there is currently a southeasterly gale with heavy rain, which can create hazardous travel conditions. From 1 pm until 6 pm, an orange weather warning will be in effect for that area with a southwesterly, strong gale. Violent wind gusts are expected by mountains, poor visibility and poor driving conditions.

A northwesterly storm is forecast for the Reykjanes peninsula and southern part of Faxaflói bay area and a storm from the north on the Snæfellsnes peninsula. Strong wind gusts are expected near mountains and traveling may become hazardous. An orange weather warning will be in effect from 1:30 pm till 5 pm.

A northeasterly, strong gale and heavy rain are forecast for Breiðafjörður bay, but snow or sleet on mountain roads.

For the West Fjords, a northeasterly storm and blizzard are in the forecast. Blizzard conditions on mountain roads and hazardous driving conditions. An orange weather warning remains in effect until 5 pm, followed by a yellow warning until 7 pm.

In Northwest and Northeast Iceland, a gale or severe gale is forecast. A yellow weather alert will be in effect in the Northwest 11 am-6 pm and in the Northeast from 6 pm tonight until 6 am tomorrow.

For the eastern coastal areas and the East Fjords, an orange weather alert goes into effect in the afternoon until late evening, with a severe gale or storm, followed by a yellow warning until tomorrow morning.

An orange weather alert with a southwesterly storm goes into effect in Southeast Iceland by 2 pm and remains in effect until 9 pm.

In the central highlands, there is currently a violent storm, with heavy snow or rain. An orange weather warning  will be in effect 1 pm-10 pm. Hazardous travel conditions.

Follow the latest weather forecast on vedur.is and travel conditions on safetravel.is.