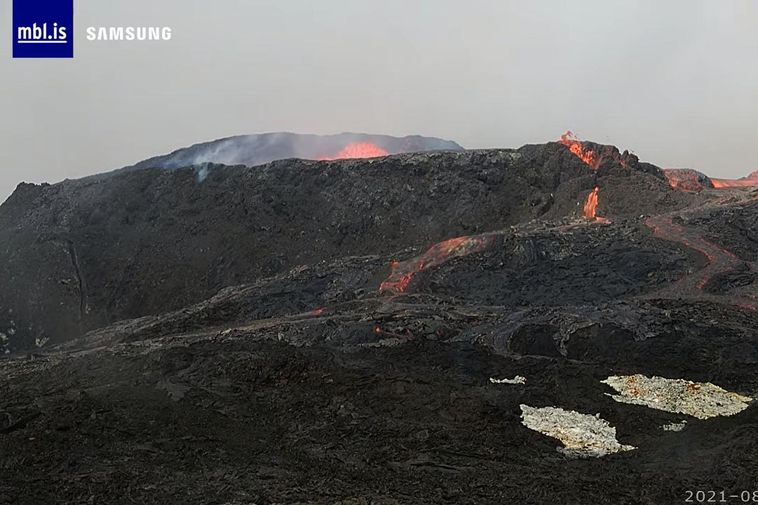 A new vent in the Fagradalsfjall eruption, Southwest Iceland, is taking shape, mbl.is reports. Lava can be seen gushing out of it, as well as out of the main crater.

When the new vent was first detected on August 9, it was too early to tell if this was a new crater forming or only a tiny opening out of the main crater. Yesterday, however, the South Iceland Volcanology and Natural Disaster Team posted the following statement on its Facebook page:

“On the mbl.is webcam, the new vent can be seen beside the crater, from where lava spatters. This opening has been visible for the past days, but it was [at first] believed that lava was simply flowing through the rim of the crater.

“Now, however, it appears fairly clear that this is an independent vent, separate from the lava lake in the crater. A small crater bowl has formed around said vent, by the main crater.”

“The new hornito in Geldingadalir valleys has grown rapidly today, since lava has been gushing out of it with great force, creating even higher splatters than has the larger crater.

“The pictures below show how rapidly the hornito has grown since noon today. At this point, its height comes close to that of the main crater, or may even exceed it. The hornito is fairly steep, and it wouldn’t be surprising if it collapsed, as was repeatedly the case at the beginning of the eruption.” To see the pictures, click here.