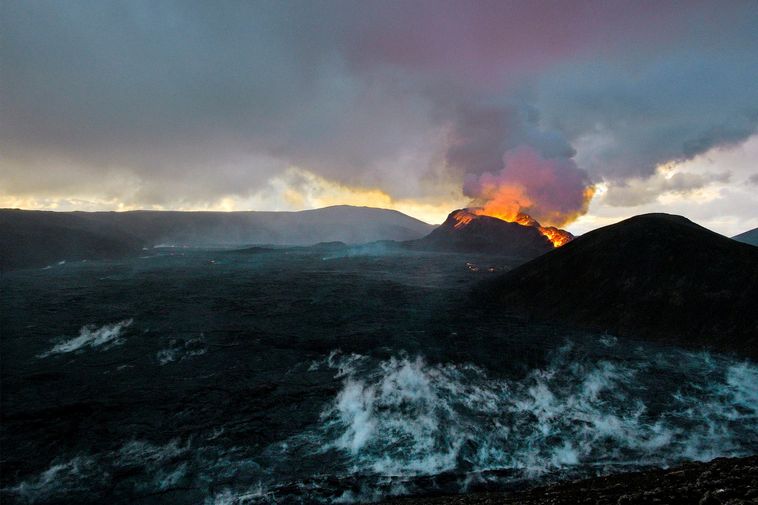 There was some visible activity in the crater by Fagradalsfjall mountain, Southwest Iceland at midnight, following a roughly 48-hour pause in visible volcanic activity – the longest pause since the beginning of the eruption March 19, mbl.is reports.

When contacted at 7:30 am, Sigþrúður Ármannsdóttir, natural hazards specialist at the Icelandic Met Office, stated that the volcanic tremor is being closely monitored, but since June 28, it has fluctuated considerably.

She added that at midnight, some activity became visible, which continued into the night. Then, the volcanic tremor changed again and embers were no longer visible, after which fog moved in, making it impossible to see what was going on.

She finds it likely that although lava doesn’t flow from the crater, it continues to flow in channels under the already solidified lava.

“This eruption isn’t over, and it is possible that there is [lava] flowing under the old lava, and sometimes it bubbles up,” she states.

When interviewed by Morgunblaðið yesterday afternoon, Þorvaldur Þórðarson, professor of volcanology at the University of Iceland, stated there were two possible explanations: either the crater is no longer active and magma is flowing into the solidified lava, where it will become visible at some point; or volcanic activity is diminishing.

The reduced volcanic tremor yesterday afternoon could indicate that the top part of the volcanic conduit has closed, Þorvaldur explained. Only time will tell whether that is temporary only.

Haze over the crater yesterday and over the surrounding lava is an indication of heat, he continued. “I suspect fresh magma is coming in there. There is so much sulfur coming up through the crater.”