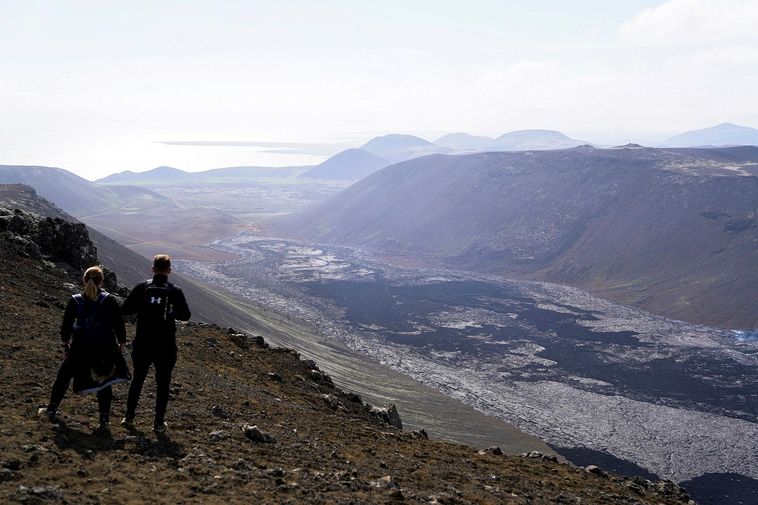 In this picture, you can see how short the distance is from the lava flow to the coast. mbl.is/Unnur Karen
Vala Hafstað
vala@mbl.is

“One of the most remarkable things about this eruption is that there doesn’t seem to be any direct connection between the lava flow and the crater activity,” Þorvaldur Þórðarson, professor of volcanology at the University of Iceland, tells Morgunblaðið, speaking of the volcanic eruption by Fagradalsfjall mountain, Southwest Iceland.

“Once we start seeing a direct connection between the two, then changes in the crater activity can begin to tell us something about the overall behavior of the eruption.” Right now, though, that connection is missing.

Þorvaldur explains that what controls the crater’s variable behavior (it has in recent days fluctuated from being very active to having next to no activity) is mainly changes in the top 100 meters (330 ft) of the volcanic conduit. If that part includes some sort of a distribution tank, and if the shape of that tank changes, then the outflow changes as well.

He suggests this part of the volcanic conduit may have widened, thereby increasing the size of the tank. As a result, it takes a new supply of magma longer to fill the tank, and meanwhile, activity drops in the crater. Once the tank fills up, activity resumes, mostly emptying the tank, and so on. Pauses between activity grow longer, because the tank has grown in size. Meanwhile, magma flows out into the newly solidified lava through lava channels under the surface.

While there was more frequent lava fountain activity, the tank was probably narrower, but just as high as it is now, Þorvaldur explains.

“This volcanic conduit is in fact 17-kilometer [10.5-mile] long,” Þorvaldur explains. “Even though you block the spout at the very top, it has little effect at a depth of 17 km. It would take some major changes to the whole supply system to stop the magma from flowing out.”

To cause such changes, a major event would have to take place, such as tectonic plate movements or a strong earthquake, Þorvaldur speculates. Besides, the magma flow is not unlimited. At some point, there won’t be enough force left to drive up the magma.