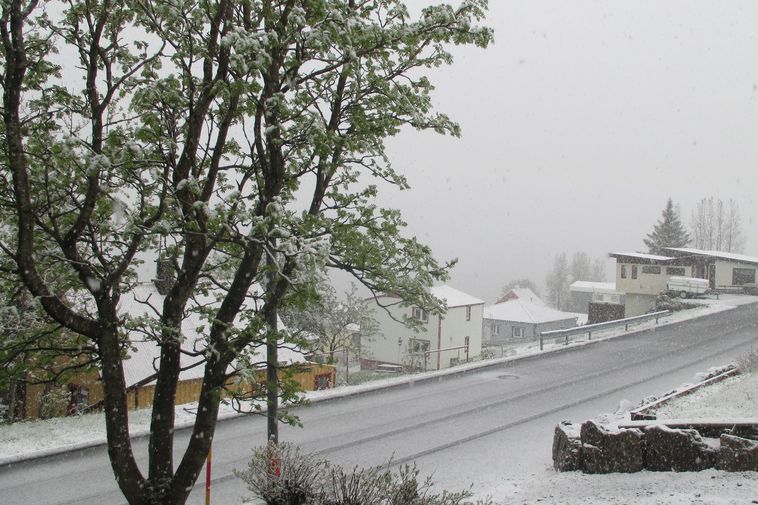 It may be the middle of June, but nonetheless it snowed in the East Fjords of Iceland yesterday, mbl.is reports. The weather forecast calls for the cold weather to continue for the coming days.

Yesterday morning, the residents of Mývatnssveit, Northeast Iceland, woke up to a snow-covered ground, and in Fáskrúðsfjörður, the East Fjords, it still snowed yesterday.

Óli Þór Árnason, meteorologist at the Icelandic Met Office, states that although the snowfall wasn’t heavy in low-lying areas, numerous areas from Eyjafjörður fjord in the north and all the way to the East Fjords saw either sleet or snow yesterday.

When contacted last night, he expected the snow to melt this morning, since the ground was not frozen. “It won’t get any warmer there until late this week,” he added. He expected precipitation to diminish this morning.

“It has gotten colder in the East Fjords lately,” he noted, “where the temperature is close to 0°C [32°F]”, as it is in many places along the east coast. Then it gradually gets warmer the farther south you go – around 3°C in Djúpivogur and 5°C [41°F] in Hornafjörður fjord [in the southeast].”

Such cold weather in June is not exceptional. “This happens fairly often,” Óli Þór stated. “June is known for being fairly cold. It is unfortunate to have this much precipitation and cold at the same time…That usually happens every few years.”