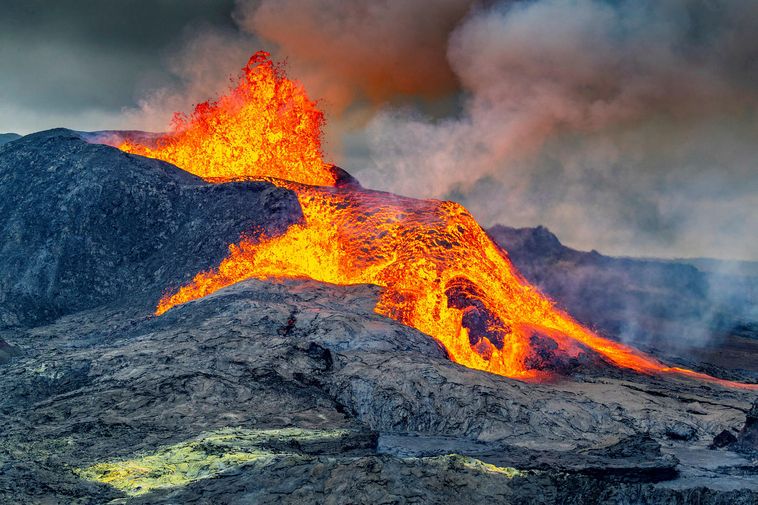 This is what the eruption looked like yesterday. mbl.is/Árni Sæberg

The crater by Fagradalsfjall mountain, Southwest Iceland, spewed lava high into the air, creating magnificent material for a photo, when Morgunblaðið photographer Árni Sæberg flew over the area yesterday on board a helicopter.

Discussion is ongoing regarding whether and where to build additional protective walls to control the lava stream and prevent it from reaching Suðurstrandarvegur road, along the south coast, as well as a house called Ísólfsskáli and its surrounding land.

“If the eruption continues, nothing is going to stop the lava stream,” states Grindavík Mayor Fannar Jónasson. “The question is whether we can direct it into some channels and prevent it from spreading over a large area or the land belonging to Ísólfsskáli.”

Various ideas have been brought up, such as making a channel for the lava stream through Suðurstrandarvegur road and building a bridge thereover. Fannar isn’t sure how realistic that idea is. Another suggestion that has come up is to cut part of the road to clear a path for the lava in an attempt to prevent it from spreading over a large part of the road.

Suðurstrandarvegur road plays an important role for the residents of Grindavík, who rely on it for the transport of goods to the town of Þorlákshöfn to the east, and for passenger transport and connection to South Iceland. Therefore, a solution must be found to prevent the road from closing for a long time.

Lava stream has already limited access to the eruption site via the original hiking paths. What is being considered is moving hiking path B higher up above Geldingadalir valleys. Traffic to the eruption site has increased considerably recently, especially that of foreign tourists, who visit the area regardless of weather conditions.