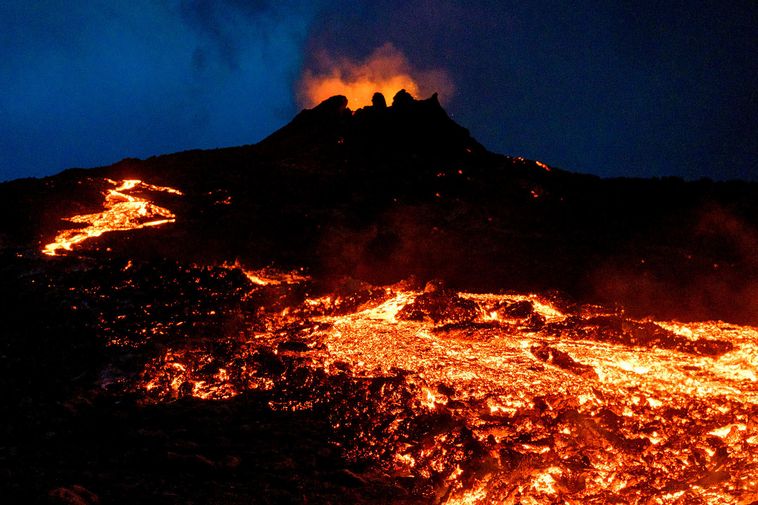 New hiking paths to the eruption site by Fagradalsfjall, Southwest Iceland, are under consideration, Superintendent Rögnvaldur Ólafsson tells mbl.is. Lava enclosed a popular observation hill there on Friday, creating an islet, or so-called kīpuka, in the middle of the lava field. (See our earlier report here).

Knowing this was imminent, first responder had sealed off the hill several days earlier. Rögnvaldur explains that the hill offered such a good view since it was the closest to the eruption. The lava stream has not yet closed hiking path A, but Rögnvaldur states it is just a matter of time before that happens.

One option, he states, is to direct traffic more toward hiking path B, but it, too, may have to be altered.

Mbl.is reports that volcanic gas pollution at the eruption site increased over the weekend, although it did not reach dangerous levels. According to Böðvar Sveinsson, natural hazard specialist at the Icelandic Met Office, most of the gas pollution is near the lava streams.

Today, gas pollution has decreased again, most likely thanks to a change in the wind direction and stronger winds, states Salóme Jórunn Bernharðsdóttir, natural hazards specialist at the Icelandic Met Office.

Lava already flows over both protective walls that had been built to slow down the lava stream toward Nátthagi valley, from where it could continue flowing south and threaten a fiber optic cable and Suðurstrandarvegur road. Rögnvaldur explains that the protective walls still stand, although lava is flowing over them.

“We’re looking at long-term solutions regarding what can be done, mainly with regard to Suðurstrandarvegur road, but we haven’t reached a conclusion yet,” he states.