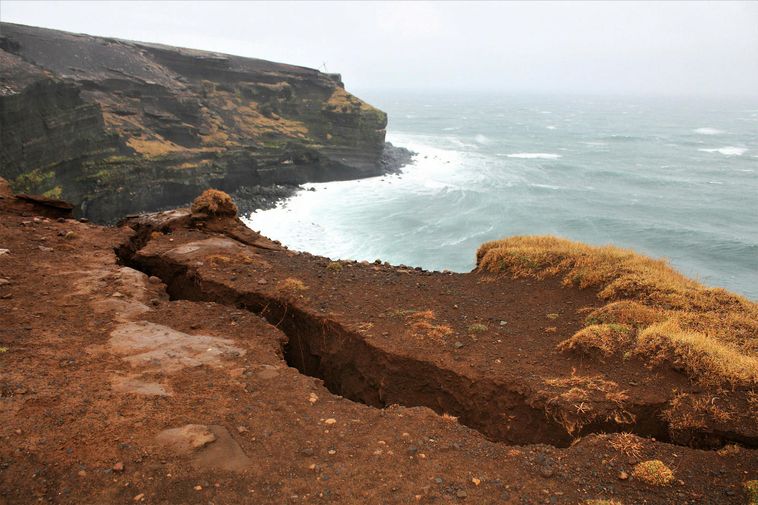 The magnitude 5.6 earthquake that hit Southwest Iceland on Tuesday didn’t just leave cracks in ceilings. In Krýsuvíkurberg cliffs on the Reykjanes peninsula, located 5-10 km (3-6 mi) southeast of the source of the earthquake, a 50-meter-long (160 ft) and on average 60-cm-wide (2 ft) crevice has opened, Morgunblaðið reports. This is an area frequently visited by tourists.

Óskar Sævarsson, park ranger, states that this has become a dangerous place to visit. Other crevices, that were already in the area, widened in the earthquake.

There is a strong smell of oil and sulfur emitting from Grænavatn lake by Krýsuvík, and activity in the hot spring Engjahver, a short distance from there, has increased considerably.

“In recent days, a very strong smell has been coming from Grænavatn lake, as if a giant oil tanker had stranded threre,” Óskar states.

Grænavatn is an explosion crater, just south of Kleifarvatn lake, green in color due to the sulfur it contains. Engjahver hot spring, on the other hand, is usually clear blue, due to inflow of water. In many places in Reykjanes, the quake sent rocks rolling down mountain slopes, in some cases putting hikers at risk.

Geophysicist Páll Einarsson states that Tuesday’s earthquake was part of a series of events, caused by movements on the North American and Eurasian plate boundaries, which stretch all along the Reykjanes peninsula.

In 2009 and 2010, uplift occurred near Krýsuvík, and the same thing happened by the town Grindavík earlier this year, in three phases. Tuesday’s earthquake is a continuation of those events.

“Whatever developments follow is something that constantly surprises us, scientists, so little can be predicted about the future,” Páll concludes.