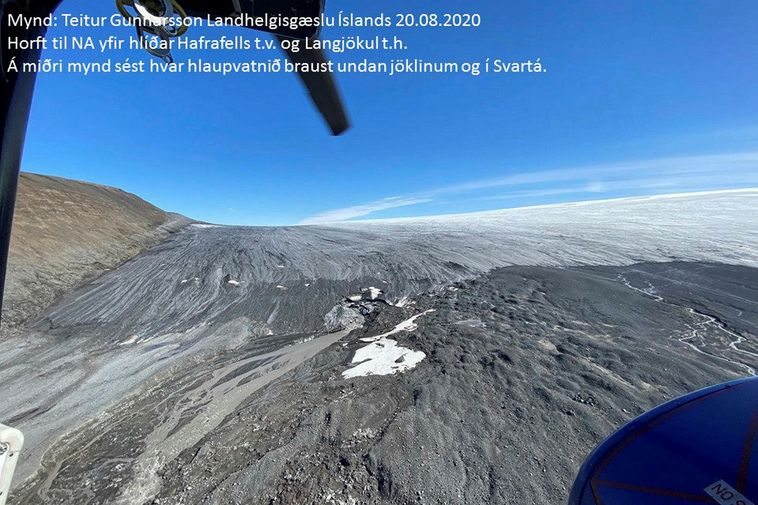 A view toward the northeast, over Langjökull glacier. The center of the photo shows where the flash flood occurred. Photo/The Icelandic Coast Guard
Vala Hafstað
vala@mbl.is

A flash flood from Langjökull glacier took place Monday night and into Tuesday morning. It is believed to have occurred when a dam containing a lagoon on the glacier’s northwestern side broke, Morgunblaðið reports.

A large amount of water streamed into Svartá river, the water level of which is typically low at this time of year. Temperatures in the area have been unseasonably warm.

The size of the flood was such that the water level nearly reached the girders of the bridge over Hvítá river near Húsafell.

The flood carried a great deal of sediments into the rivers, and farmers who own land farther down Hvítá river have discovered numerous dead salmon in their fields.

Scientists will be checking conditions near the lagoon to see whether river channels have permanently changed and to assess how much risk glacial outburst floods are likely to pose in the future.

Tómas Jóhannesson, project manager of glacial research at the Icelandic Met Office, tells Morgunblaðið that changes are occurring at lagoons and streams near other glaciers in the country, as well as all over the world.

This, he states, presents a problem since the location of numerous structures and operations depends on current river channels remaining unchanged. “When changes occur, people may be forced to reassess roads, bridges, and all sorts of operation near glaciers and glacial rivers,” he explains.