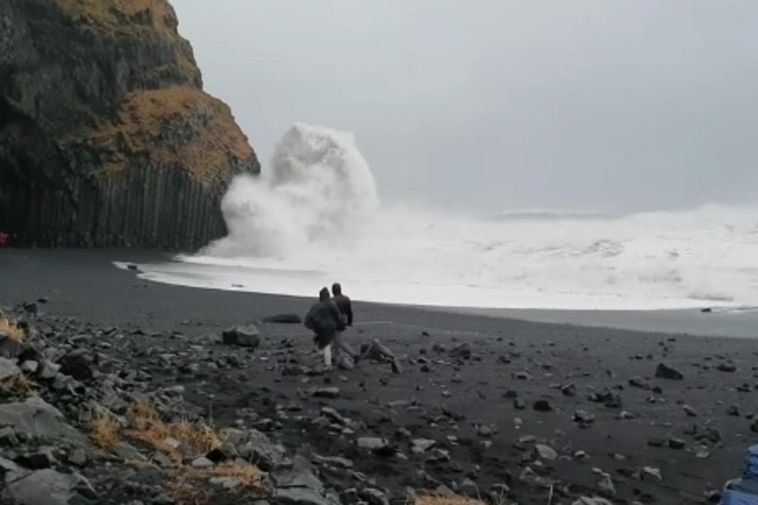 A Chinese man in his thirties is lucky to be alive after being caught in a wave on Reynisfjara beach, South Iceland, yesterday, mbl.is reports. “He was strong. He managed to save himself and hold on to something steady, but in doing so, he injured his shoulder,” Sigurður Sigurbjörnsson, police officer  in Vík í Mýrdal tells mbl.is. The man was brought to hospital for medical care.

After the incident, Sigurður shot a video of the waves on the beach, which were unusually high. You can see it below:

Tour guide Þórólfur Sævar Guðmundsson was on the beach yesterday as well. One of the tourists in his group shot the video below of tourists who narrowly escaped when huge waves hit the beach. “These [waves are] among the largest I’ve seen,” he remarked. “It seems that people don’t understand the danger. It appears some have been attempting to provoke the sea.”

You can watch how narrowly the people escaped:

Þórólfur states he always warns the tourists he guides of the danger on Reynisfjara beach. “I don’t sugarcoat it. I tell them lives have been lost there,” he notes. He believes people on guided tours are more careful than those who come there on their own. “I have the feeling that they are more careful. They have been warned,” he states.

Þórólfur would have liked to see the area closed yesterday. Sigurður states that was not discussed and adds that it would have been difficult to do, due to the size of the area. He stresses that people must be trusted to be careful and that the signs in the area are very clear.