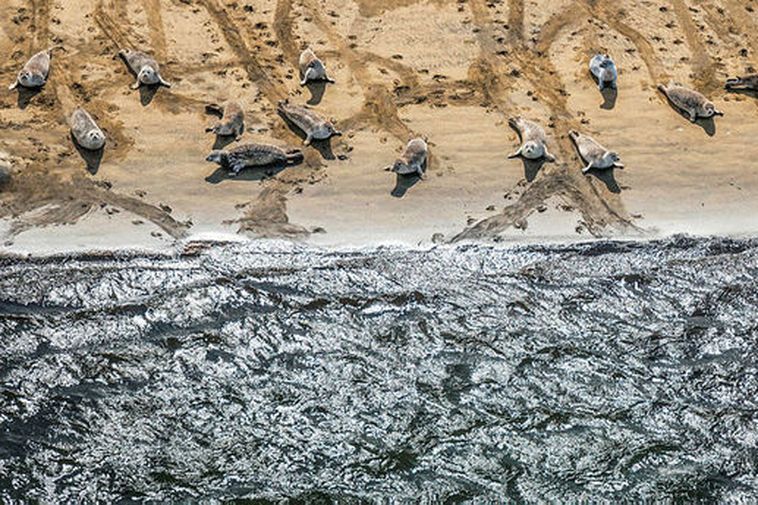 A number of harbor seals were sunbathing on Löngufjörur beach on the Snæfellsnes peninsula, West Iceland, when Morgunblaðið photographer Ragnar Axelsson, a.k.a. RAX, flew over the area on Saturday. This is the beach where dozens of beached pilot whales were discovered last week.

Ragnar reports that the picture only shows a fraction of all the seals lying on the beach that day. They left marks in the white sand, having moved slowly back and forth, before and after a dip in the ocean.

The population of harbor seal (also known as common seal, Phoca vitulina) in Iceland has declined by 72 percent since 1980, when an annual count of seals began, leading the Marine and Freshwater Research Institute to suggest a ban on direct hunting of the species, according to Morgunblaðið.

Besides, the institute suggests that ways be found to reduce the by-catch of harbor seal during net fishing.

Although the population has decreased substantially since 1980, it is 23 percent larger than in 2016. The harbor seal population is estimated at 9,400 animals, while a recommended minimum population size is 12,000 seals.

There are mainly two kinds of seal on the shores of Iceland. The other species is grey seal (Halichoerus grypus). Its population, too, is in decline.

For more information about Icelandic seals, visit the website of Selasetur Íslands.