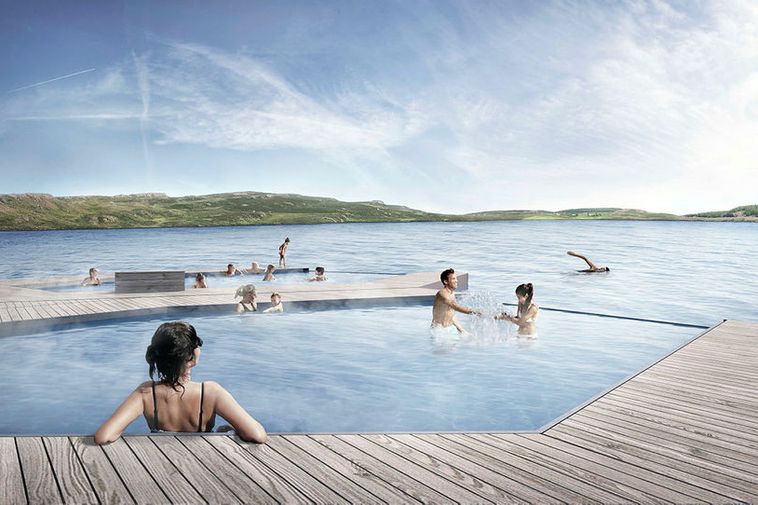 Floating pools, beer brewed with geothermal water, and geothermal tea – all this will be on offer at new nature baths, Vök Baths, by Urriðavatn lake, near Egilsstaðir, East Iceland, set to open next week.

“What distinguishes us is the floating pools, which are the first and the only ones of their kind in Iceland,” Heiður Vigfúsdóttir, CEO of Vök Baths, tells Morgunblaðið.

She explains that what sparked the idea for the resort was the holes which used to form in the ice of Urriðavatn lake, due to 75° C (167° F) geothermal water at its bottom, now used to heat houses in Egilsstaðir and vicinity. The word vök means a hole in the ice.

“To begin with, residents near the lake were puzzled. This resulted in folk tales being created about monsters living at the bottom of the lake,” she adds. The design of the pools is meant to resemble those holes in the lake.

There will be refreshments on offer at the baths – among them tea, which guests are offered to brew with untreated geothermal water, straight from the borehole, and local herbs.

There are two on-shore pools at the resort, one of which includes a bar. Among the beverages will be two types of beer, Vökvi and Vaka, brewed with geothermal water and locally grown barley and lemon balm.

Guests will also be able to take a steam bath and cool off afterwards with a cold mist shower.

Heiður reports great interest in the baths among people in Iceland and abroad. “From the start, the locals have welcomed the project and shown it great interest.” Annual passes have already sold well, and a marketing effort has proven effective.

“The phone has been ringing off the hook, and we ended up having to record a message, explaining we hadn’t opened yet. We keep receiving emails, questions and phone calls,” she notes and adds that they have already received numerous reservations.