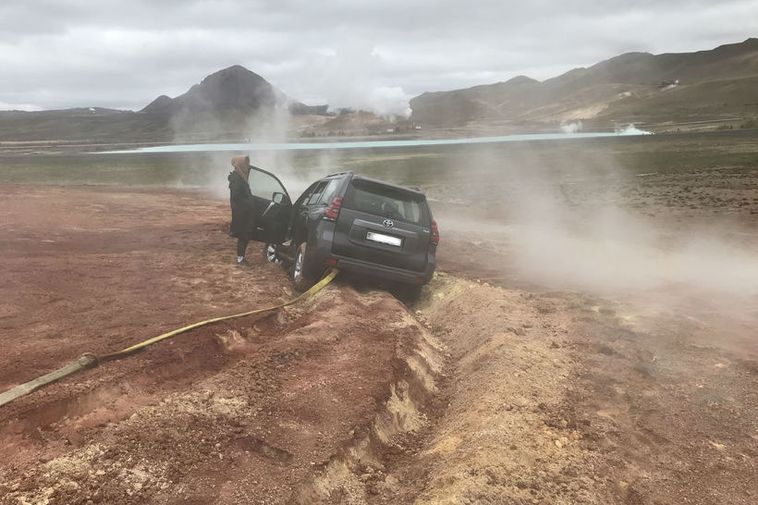 A Russian social media star, Alexander Tikhomirov, is responsible for extensive damage to the land near Mývatn lake, North Iceland, due to off-road driving there yesterday. Off-road driving is illegal in Iceland, and “This violation was intentional,” landowner Sigurður Jónas Þorbergsson states.

A 4x4, carrying five people, drove off the road by the Mývatn Nature Baths, leaving large tracks in the landscape and ending up stuck near a hot spring area. The Akureyri Police Department confirms that the damage is substantial, mbl.is reports.

“Witnesses notified police, and it was clear that the vehicle had been driven with such intensity that it got stuck in a clay morass,” a post on the Facebook page of the Northeast Iceland Police states. Half an hour after being notified, police arrived from Húsavík, and subsequently, an excavator had to be brought in to remove the vehicle, unavoidably increasing the damage.

Tikhomirov will have to report to the Akureyri Police Station today, where he faces a fine, likely amounting to hundreds of thousands of krónur (thousands of USD or EUR).

According to mbl.is, he is well known on social media for specializing in photography and the making of videos during his travels, with a focus on scantily clad women. Yesterday, he posted a picture of himself on Instagram, stating, “Congratulations! Today, I got a big fine.”