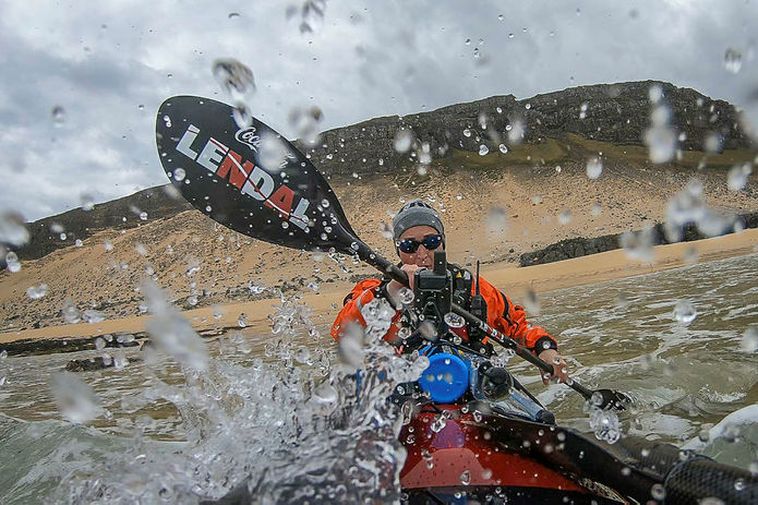 Veiga Grétarsdóttir is kayaking around Iceland. Her trip began in Ísafjörður, the West Fjords, from where she headed southwards, along the coast. On Friday, she left Stykkishólmur, West Iceland, for Ólafsvík, a 50-km stretch. Óskar Páll Sveinsson follows Veiga on her adventure, making a documentary about it.

Veiga is pleased with the progress so far. “Still, the stretch from Rauðisandur beach, [the West Fjords] to Siglunes was tough, with the wind in my face the whole way, as well as the last 10 kilometers before arriving in Flatey island [on Breiðafjörður fjord].”

“It has gone well so far,” Óskar Páll told Iceland Monitor yesterday. “Overnight, we paddled by the Snæfellsnes peninsula, from Hellissandur to Arnarstapi. We reached shore at about 8 am.

“Still, it’s been difficult at times. Sometimes, we must fight the wind and large waves, and there are blisters on most fingers. But Veiga is tough and gets tougher by the day,” Óskar Páll continues.

He estimates they may have eight to ten weeks to go, but admits the weather could be a hindrance. Most people who have kayaked around the country have taken two to three months to do so. Veiga spends most nights on land and also takes a day off now and then to rest. She goes ashore every 10-15 km (9 mi), and the longest she has traveled in one day is 50 km (31 mi).

During the journey, she has eight lectures scheduled, where she will talk about her experience. She is a trans woman, who attempted suicide during the gender reassignment treatment. Therefore, she chose to collect donations for the Píeta Association in Iceland during her adventure.  The association helps people in suicidal distress or engaging in self-harm.