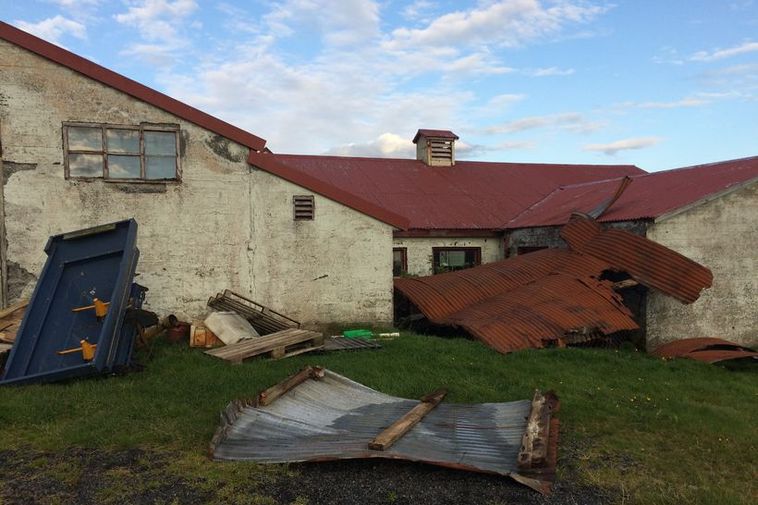 Tornadoes, which are highly unusual in Iceland, caused extensive damage at the South Iceland farm of Norðurhjáleiga, on Friday afternoon. The farm is located midway between Vík and Kirkjubæjarklaustur.

Fortunately, no one was home when the two tornadoes struck, so there were no injuries. Seven buildings were damaged and a large 4x4 with a trailer went airborne and was thrown into in a ditch. A neighbor saw this happen and alerted the farmers. She spotted three funnel clouds in the air, two of which touched the ground.

“We were away from home when this happened, but our neighbor called to tell us that our roof sheets were blowing away. It wasn’t even windy at her place,” states Sæunn Káradóttir, farmer. “Everything was in ruins when we came home,” she adds. “The situation is indescribable.” Roof sheets were blown hundreds of meters away and fences fell down.

“This is what we know and hear of in the United States and elsewhere in the world,” meteorologist Einar Sveinbjörnsson tells mbl.is, “but until now, we haven’t seen it in this form. I don’t remember there ever having been damage from [tornadoes] here [in Iceland] until now.”

Conditions for tornadoes to form require “a lot of warming of the surface, along with cold air in the upper atmosphere,” Einar explains. He states that funnel clouds, like the ones that formed on Friday, are not common in Iceland, due to the climate. On August 1, a funnel cloud was spotted near Þorlákshöfn, Southwest Iceland, but it didn’t touch the ground.

“It is not unusual to see funnel clouds in the sky. We have many examples of those, but we don’t really call those tornadoes,” Einar adds.