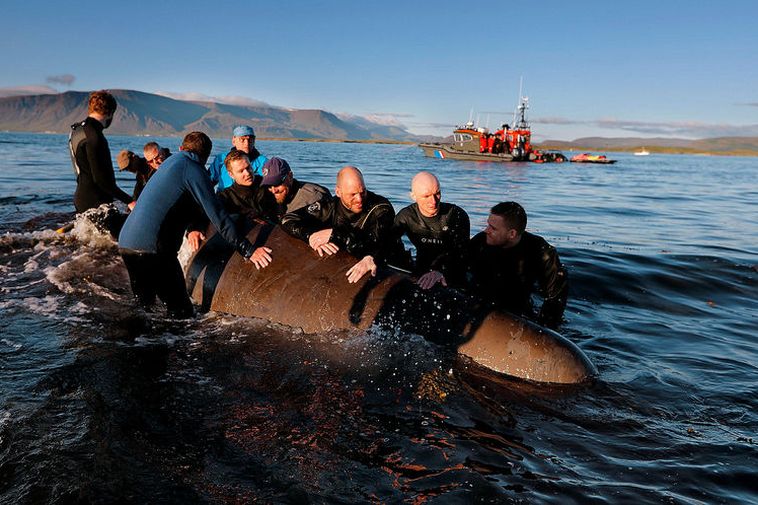 Numerous people took part in rescuing a stranded bottlenose whale from Engey island, near Reykjavík, yesterday afternoon. Two bottlenose whales stranded on the island’s shore around 1 pm. Despite attempts by a number of people to keep them alive, one of them didn’t survive, whereas the other one made it back to the ocean around 7 pm, at high tide.

Staff from whale watching companies in the area, rescue workers and biologists covered the whales and pumped water over them, in an effort to keep them alive. When discovered, both of the whales were injured and bleeding, from struggling on the rocky shore.

According to Gísli Víkingsson, head of whale research at the Marine Research Institute in Reykjavík, bottlenose whales thrive in deep waters and rarely venture into shallow ones. Only sperm whales can dive deeper than bottlenose whales, he tells Morgunblaðið.

This year, the number of bottlenose whales around the country has been unusually high. The reason isn’t clear. Gísli explains that the bottlenose are extremely sensitive to noise, and use hearing more than sight for finding their way through the ocean. Deep-sea bombs are known to confuse them, as are oil exploration operations.

He recalls that last year, numerous bottlenose whales flocked to European coasts, especially in the UK, and many among them didn’t survive. This coincided with military drills at sea, including deep-sea explosions.