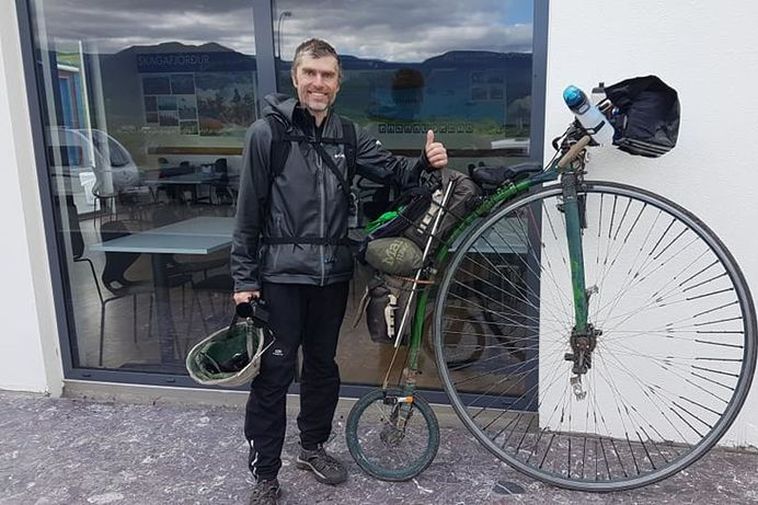 In recent days, an unusual bicycle has caught the attention of passersby in North Iceland. The bike, called a penny-farthing or high wheel, was the precursor to what we call a bicycle, and was popular in the 1870s and 1880s. It has a large front wheel and a much smaller back wheel. The name comes from comparing the size difference of the two wheels to that between an old British penny and a farthing, which was a quarter of a penny.

The person riding the penny-farthing is Joff Summerfield, from the UK. He is riding this unique bike around Iceland. He cycled around the world between 2006 and 2008, visiting 23 countries. This is his first visit to Iceland, and his visit is part of his second trip around the world, during which he has already covered 45,000 km (28,000 mi), riding the penny-farthing through the US, China and India. Next year, he plans to go to South America. You can follow his travels here.

Summerfield, who comes from a motor racing family and who is trained as a race engine builder, makes his penny-farthings himself and told the BBC that traveling this way makes it easier to get to know people, for they always show interest in his penny-farthing. He expects the trip around Iceland to take a month.

Magnús Hafsteinn Hinriksson ran into Summerfield in Varmahlíð, North Iceland, on Friday. He told mbl.is that the British adventurer was in a good mood and especially happy with the quality of Icelandic water.