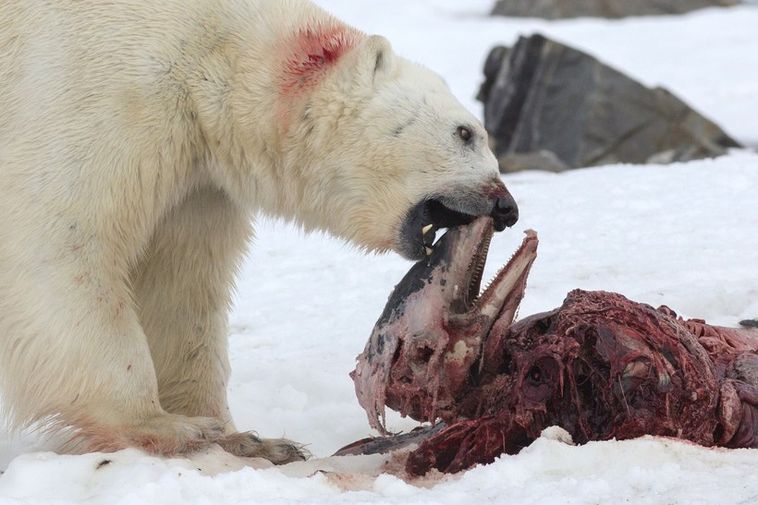 A polar bear eating a seal in Svalbard. Photo/ AFP

"My friend screamed at us that there was a polar bear right in front of us and started to run," explains guide David Zehla to mbl.is. He was fishing with French friends when they spotted an animal that they believe to be a polar bear.

"I didn't have time to even check that it was a polar bear because of the ensuing panic. I tried to look whils we were running but I saw nothing following us," he says, and adds that at first he thought it was a sheep or a ram but says he has bad eyesight.

"I saw something huge, but I can't be certain whether it was a polar bear or a large ram," says David.

He says that the animal was alone and was drinking water from a stream around 60 - 70 metres away from them and didn't notice the men at first.

Killing polar bears in Iceland “only logical thing to do”

"We were so frightened that we dropped the trout we has caught. We thought about throwing our heavy fishing bags that were slowing us down. We kept on trying to look behind us but my friend was so convinced it was a polar bear we didn't even think about returning or taking a photograph, we just wanted to make it to the car," he says laughing and adds that they ran four kilometres in twenty minutes. He added that the landscape was full of small hills which made it impossible to see further than 60 - 70 metres ahead which meant that the polar bear, if it was a polar bear, could have appeared in front of them at any moment.

David says that they saw no option except report the sighting as his friend is completely convinced that it was a bear and they felt an obligation to report it to the authorities. He says they are afraid of going back to the same area to fish so they will be heading back south.