14 places to visit on Reykjanes Peninsula 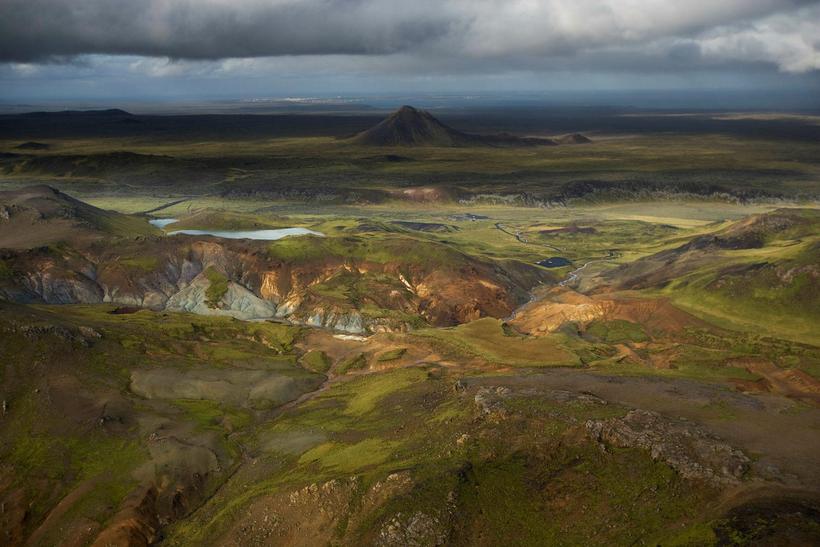 Reykjanes Peninsula is perhaps one of the most underrated places in Iceland. It’s the home of Keflavik International Airport, and most tourists drive straight from there to Reykjavik without so much as a stop for a look around, aside for a visit to the Blue Lagoon. They don't know what they're missing.

The landscape at the peninsula is rough and a bit alien looking. There isn’t all that much grass, instead there are great lava fields covered in moss. There are old craters, fissures and bubbling, geothermal mud pools. By the sea there are many places with amazing rock formations, most of them very dark grey. They are particularly spectacular when the wind is blowing and the sea violently hammers upon the rocks, wave after wave.

In addition to the beautiful landscape the culture is interesting. Most of the towns were built up around fisheries, and Icelanders from all over the island came there for work. Others around the US Army base. There are plenty of interesting museum, one of which is dedicated to rock ‘n’ roll.

Keflavík is known for being the hometown of many of Iceland’s most popular bands over the last decades, and was often referred to as “The Beatles Town”. It is therefore very fitting that it’s the home to The Icelandic Museum of Rock ‘n’ Roll. The museum is modern and the presentation is interesting. It features the history of Icelandic pop and rock music and no music enthusiast should pass by without a visit. 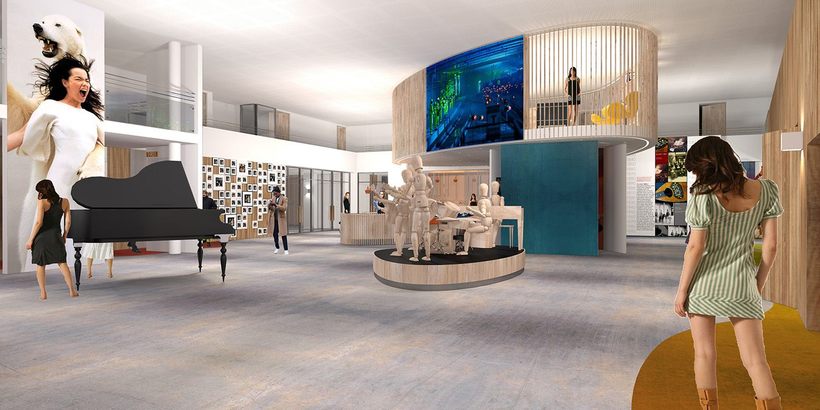 2. The bridge between continents

The boundaries between the Eurasian and North American tectonic plates (one of the causes for Iceland’s volcanos and lunar landscapes) lies right under Reykjanes Peninsula. As the plates are moving in different directions, every now and again the land gives away and large fissures form on the surface. There’s a bridge between one of these fissures close to Sandvík, on the west end of the peninsula. You can either stand up on it or go down into the fissure, and stand on the borders the two tectonic plates. 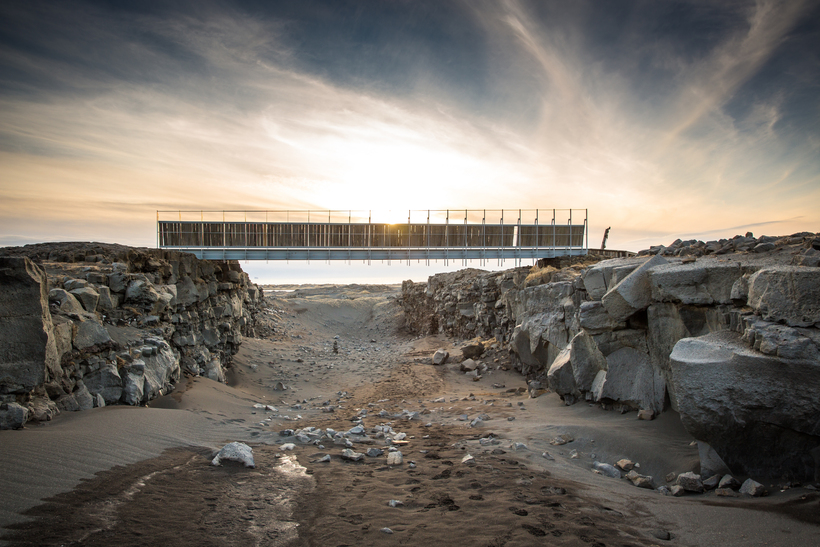 Básendar was a trading post which was swept away in a tidal flood in 1799, the biggest disaster of its kind in Iceland. With great luck, every villager escaped save for one elderly woman. The ruins are still there. When you drive from the town Sandgerði towards Stafsnes you’ll happen upon the parking lot and a short hike will get you to Básendar. 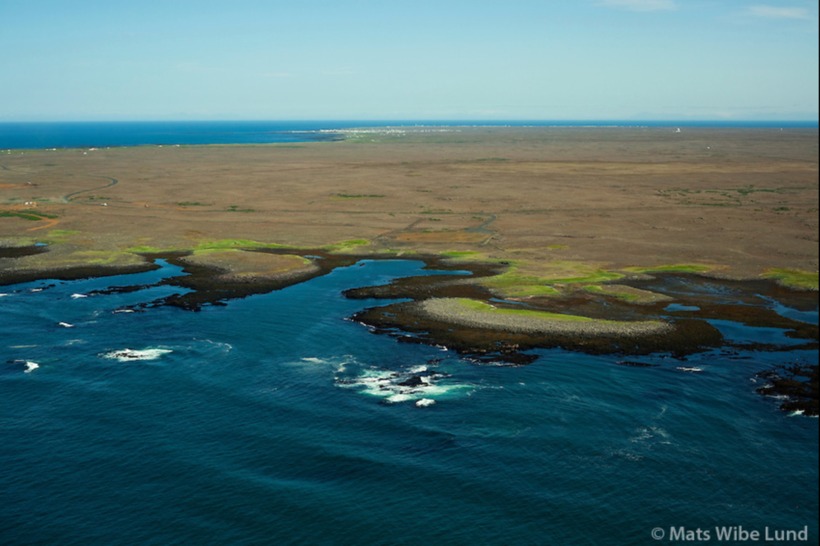 Básendar were swept away in a tidal flood. Photo: Mats Vibe Lund

One of Iceland’s most famous landmarks, The Blue Lagoon. It is indeed the perfect place for a luxury soak in geothermal water filled with minerals which are great for the skin. The buildings are modern and cheek, the service is good. It’s not cheap, but it's unlike anything else. 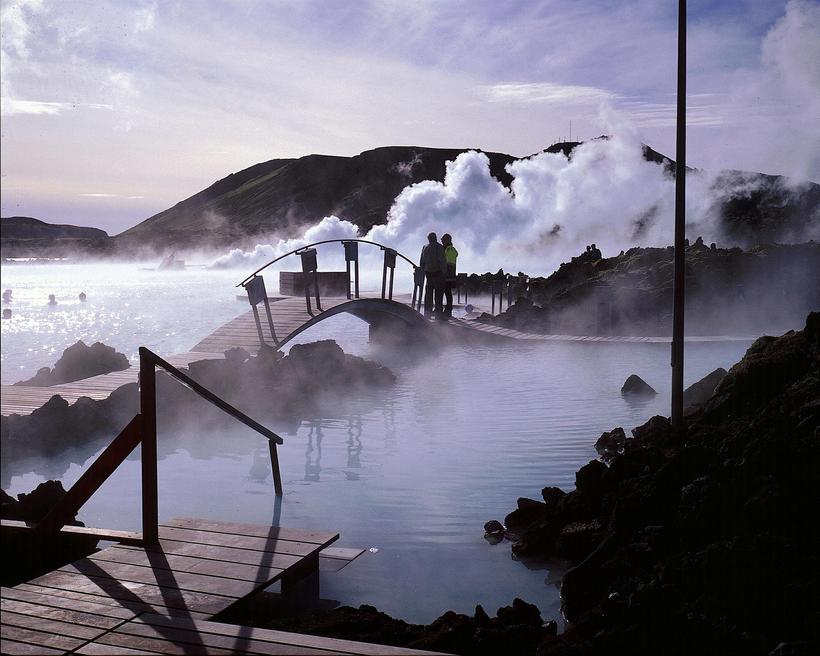 The Blue Lagoon is a popular destination among tourists that visit Iceland. Photo: Iceland Monitor/Gísli Sigurðsson

The Blue Lagoon is also the home of what is considered to be one of the best restaurants in Iceland, LAVA. The name may seem pretentious as the word lava is used all over the country to sell all sorts of things to tourists, but as it is located in the middle of a lava field, it’s very fitting. The food is much like the Blue Lagoon itself. Icelandic ingredients in modern, luxurious style. 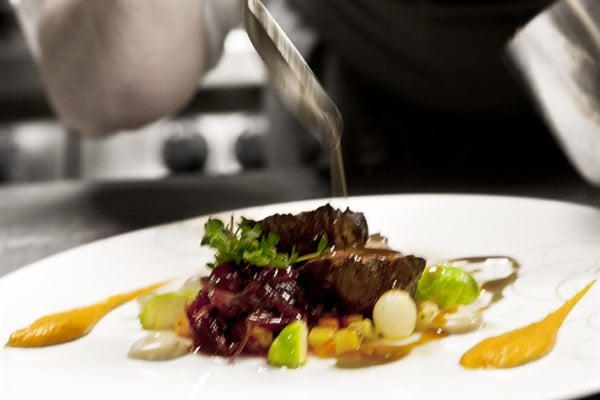 With bubbling mud pools, boiling water, steam and distinct smell of sulphur, Gunnuhver is one of the most interesting places to visit in Reykjanes Peninsula.  It’s named after a ghost who caused quite the stir in the area until a priest trapped her in the pool over 400 years ago. 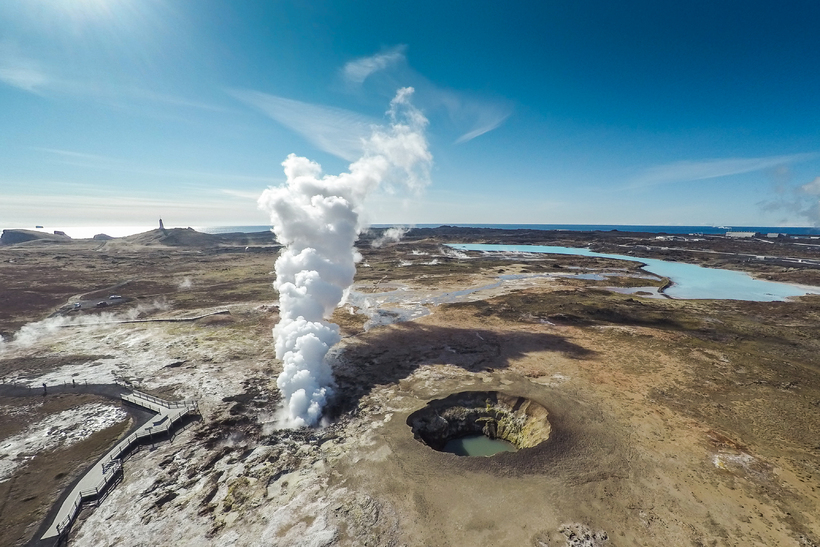 Gunnuhver geothermal area is located on the south-west corner of the peninsula. Photo: OZZO

Viking World is a museum in a beautiful building at the edge of Reykjanesbær. It focuses on, you guessed it, Vikings! The item in the museum is best known for is a great Viking ship, built in 1996 after a 9 th century Viking ship. The builder, Gunnar Marel Eggertsson, sailed the ship to New York in 2000 as a part of the millennial celebration of Leifur Eiríksson’s journey to the New World. There are five exhibitions in the museum, and there is also a playground and a settlement zoo. 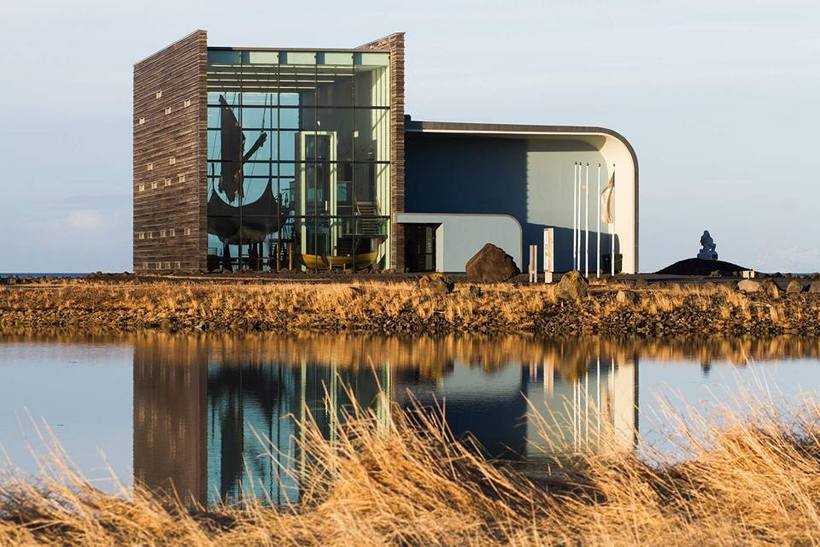 Brimketill is a lava rock formation in the shape of a pool on the edge of the ocean. It is also named Oddnýjarlaug. As the story goes the troll Oddný used to bathe in the pool and wash her clothes there. The view over Brimketill is stunning. Beyond it there is nothing but the Atlantic Ocean open before you. The rocks and lava formations around Brimketill are pitch black against the blue and white of the ocean, which hammers upon the rocks. 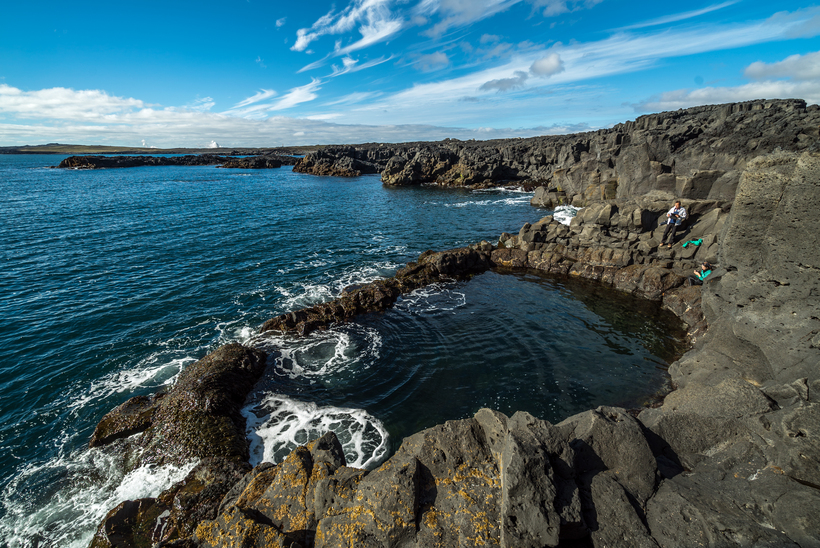 Brimketill is also named Oddnýjarlaug, after the giantess that supposedly bathed there. Photo: Snorri Thor Tryggvason

9. The Giantess in the Cave

Iceland is a land of folk tales. There are stories of trolls and hidden people living in just about every other rock and hill. One of these creatures lives in a cave by the harbour in Reykjanesbær, a full size giantess. You can stop by for a visit and perhaps snap a picture or two. 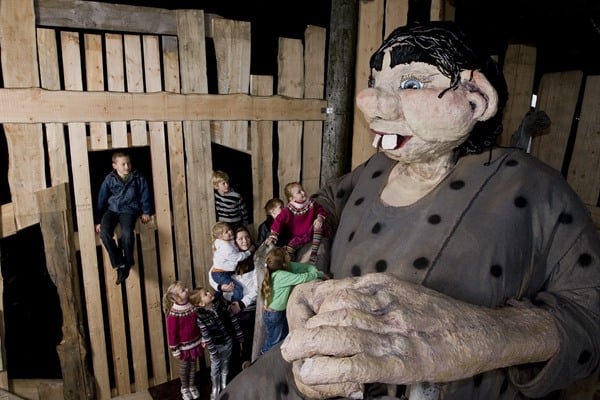 The giantess lives in a cave in Reykjanesbær. Photo: Visit Reykjanes

Reykjanes Peninsula has for centuries be known for the abundance of seafood at its shores. One of the best places to enjoy these is Vitinn restaurant in Sandgerði. It’s not a fancy upscale restaurant, but it's good and they serve some of the best variety of fresh shellfish in Iceland. 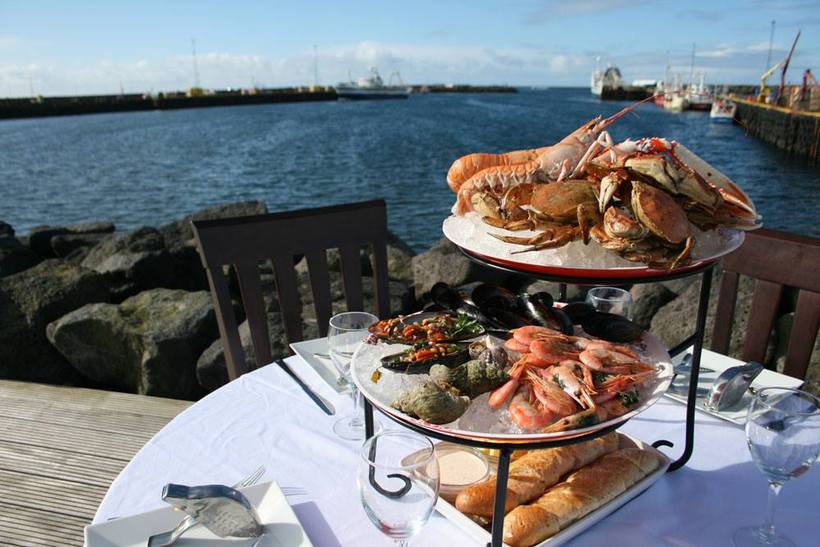 Driving south Krýsuvíkurleið takes you past Kleifarvatn, a large lake which got decreased much in size in an earthquake around 10 years ago. The rock formations around the road are beautiful, formed by volcanic eruptions and split by earthquakes.

By the south end of the lake you’ll start to see steam rising up into the air, you are getting closer to Krýsuvík where you’ll find are many geothermal areas with hot springs which you can walk up to (just be careful to stick to the paths so you won’t get burned), old craters and colourful lakes. Grænavatn is particularly beautiful, a lake coloured green by algae thriving in it. 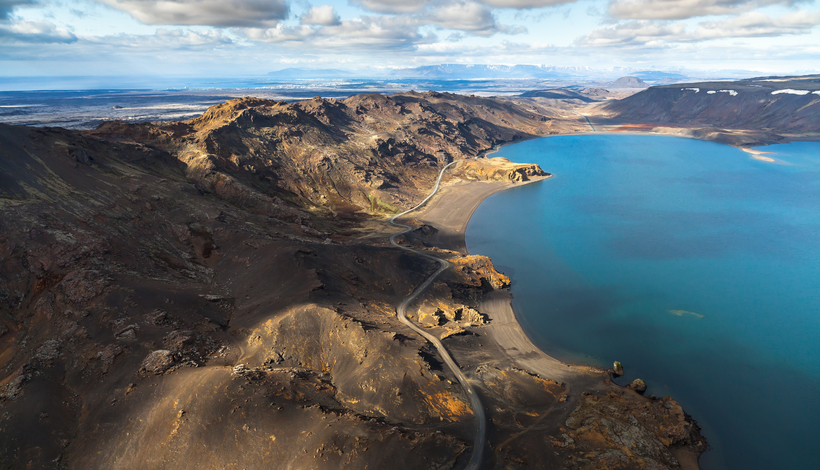 One of the many amazing places to watch the ocean beating on the cliffs of the shore in Reykjanes is at Hafnarberg. The cliffs are tall, located just south of town Hafnir, an old fishing town. The area is particularly popular amongst bird watchers, as the cliffs are home to many different species of sea birds.

There is something mesmerizing about watching the sea beat upon the cliffs. Photo: Iceland Monitor/Rax / Ragnar Axelsson

Keilir is distinct, tall, cone shaped mountain in Reykjanes Peninsula, and one of the best known mountains in the area. There’s even a school named after it. The hike up this 380m mountain isn’t very difficult, and the view on a good day makes the effort definetly worth it.

Keilir is so renowned, there's a school and a golf club named after it. Photo: Iceland Monitor/Ómar Óskarsson

Reykjanesviti lighthouse stands on a hill and looms over a beautiful beach, marked with tall, straight cliffs. The view from the lighthouse is great but a walk down to the rough beach is even better. 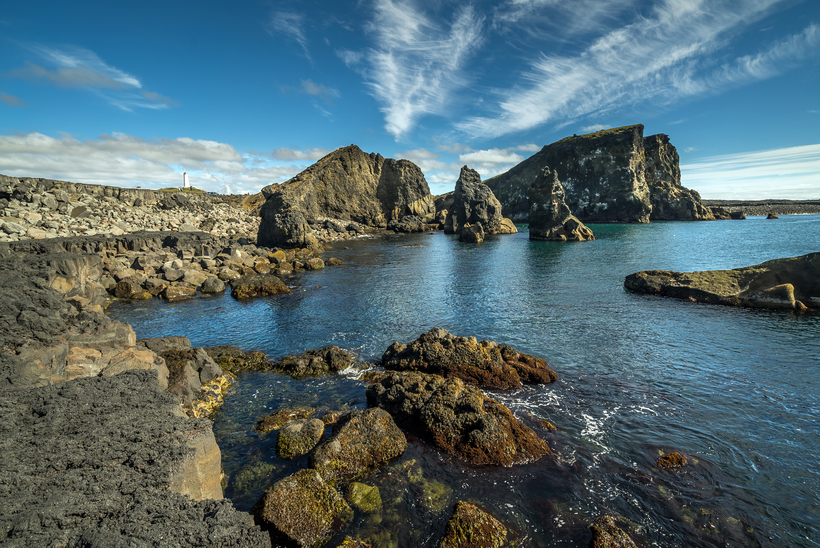