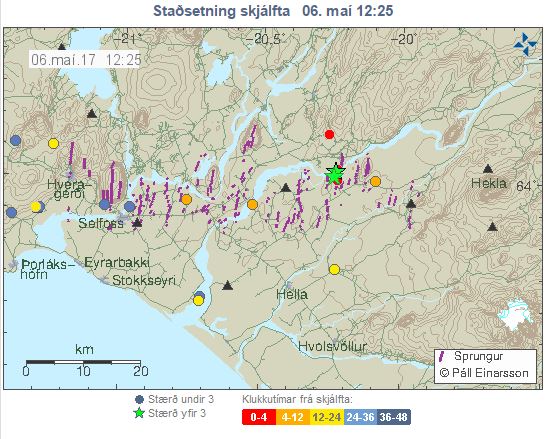 The earthquake epicenter is market with a green star, about 30 km west of Mt. Hekla Volcano and near the Þjórsá river riverbed. Screenshot/Icelandic Met Office

An earthquake of 4,4 magnitude hit South Iceland shortly after 12 noon today. Smaller quakes were also felt. The epicenter was about 30 kilometers west of the Mt. Hekla volcano and 4-7 kilometer under the earth's surface. The earthquake was felt in various parts of South Iceland including Selfoss and Hella.

According to the Icelandic Met Office the earthquakes are not related to Mt. Hekla and are not a sign that an eruption is imminent. No injuries or property damage has been reported. Charles Gittins was in Hella, South Iceland, when the earthquake hit today.

Charles Gittins was in Hella today. He was just about to recline to enjoy a good book when the quakes hit.

“I felt three tremors, mainly two. I heard and saw the glasses shake in the kitchen,” he said. Each of the quakes lasted for a few seconds. “This is the strongest earthquake I have witnessed in Iceland, but Icelanders have probably experienced stronger quakes”.