The herders that found Einhyrningur first thought he was a goat. Photo: Erla Þórey Ólafsdóttir

The ram Einhyrningur (Unicorn) only has one horn sprouting from the middle of his forehead, unlike most Icelandic rams that have two horns.

Like all Icelandic sheep, Einhyrningur was rounded up into the mountains shortly after it was born last spring, where he stayed for the summer. When the sheep were rounded up in autumn he was accidentally left behind along with his mother and some other sheep. He was found by farmers around Christmas, who mistook him for a goat at first.

“It was funny, the shepherds saw him through binoculars, and had no idea what this thing was. Thought at first it was a billy goat with this high horn. Then when they got closer they saw it to be a sheep, with such a peculiar horn. Both horns grow together like one, and split at the end,” says farmer Erla Þórey Ólafs­dótt­ir of Hraun­koti at Land­brot, Einhyrningur‘s owner.

Most Icelandic sheep have two horns, both male and female. There are even some that have four. Ólafsdóttir says both Einhyrningur’s parents had two horns, and none of her sheep has ever had four horns, so she believes this is some sort of mutation. One horn like this is very unusual and the older farmers of the area have come by to take a closer look at him.

“This seems special, and he has a peculiar look because of this. The horns stretch his face, particularly around the eyes so he always seems to be a bit surprised. He kind of looks like people that have had a facelift,” Ólafsdóttir adds laughing.

She says Einhyrningur is calm and good tempered, but that he has had some rows with the other rams, perhaps because he is different. “He quickly finds his own way. The horn gets in his way but he manages to get about his business in a sheepcote even though its not designed for unicorns. 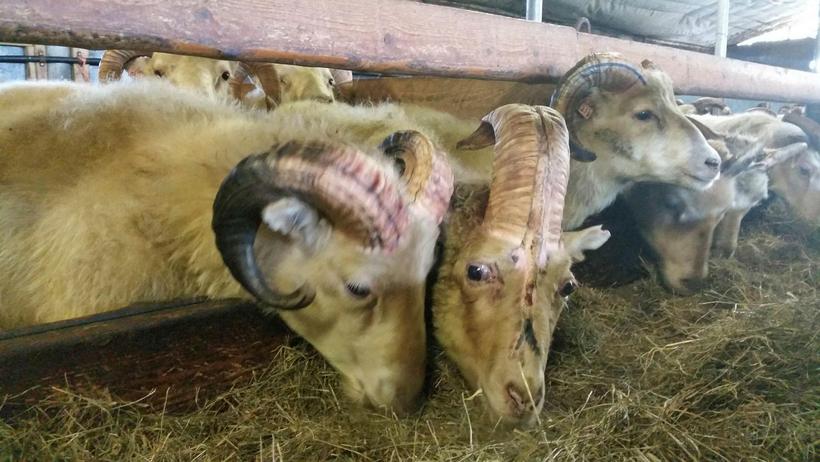 Einhyrningur has been getting in rows with the other rams. Photo: Erla Þórey Ólafsdóttir

Spreading the Beauty of Icelandic Sheep