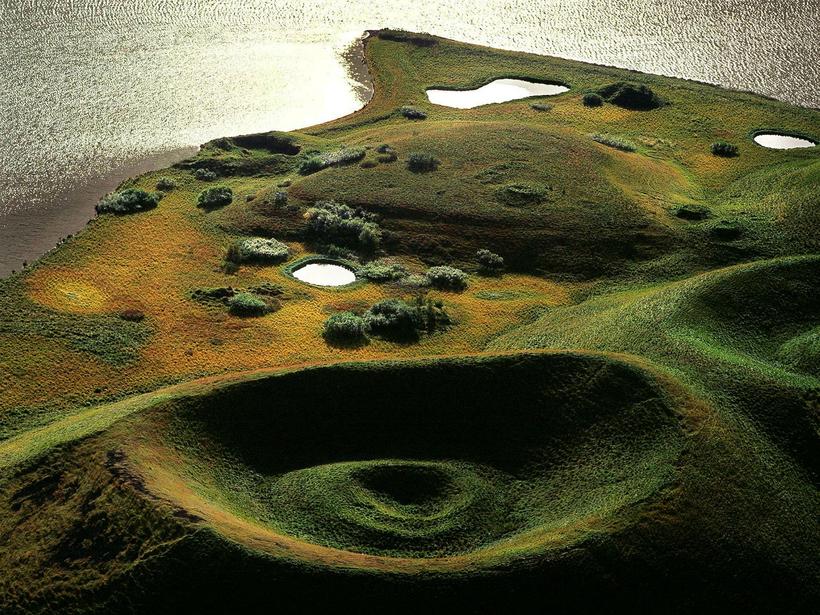 Mývatn is a popular destination for many reasons. Photo: Iceland Monitor/Rax / Ragnar Axelsson

Gorgeus nature is no less in North Iceland than in South Iceland . Here’s a list of some of the most stunning places to enjoy nature in North Iceland. The lists starts with places in the North East and leads on to the North West. Most of them are easily accessible by car and close to the main roads.

Many of the places listed here are not well known to the common traveler in Iceland, a great way to enjoy nature in peace and quiet.

Rauðanes in Þistilfjörður is a little known jewel of nature, known for stunning rock formations and a great view from the edge of the peninsula. There are high cliffs, columnar basalt and all this inhabited by large flocks of birds. There is a beautiful 7 km path to hike around the area, just keep in mind that there are no shops along the way so bring your own bottle of water. 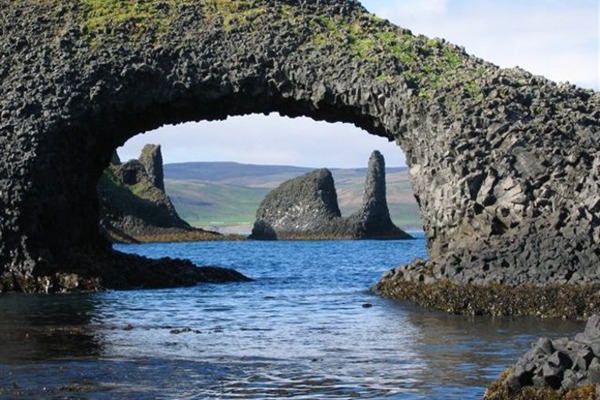 Raufarhöfn is the home of the Arctic Henge, a newly built monument for ásatrú, pagan beliefs based on the old Nordic belief system. It’s in many ways similar to Stone Henge, casting shadows and capturing light between the gateways. 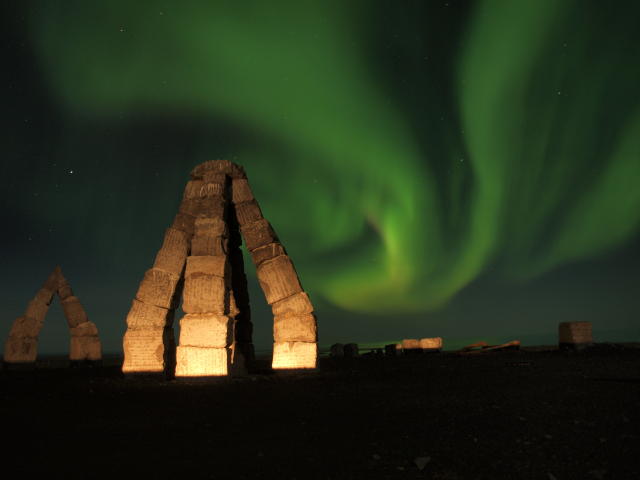 The Arctic Henge is located by the town Kópasker. Photo: Iceland Monitor//Erlingur

Ásbyrgi is a national park, no less stunning than Þingvellir (one of Iceland’s most famous national parks) but in a different way. It is in the centre of a horseshoe shaped rock formation full of beautiful vegetation. The story has it that it was created when Norse god Odin’s horse Sleipnir stepped down there. 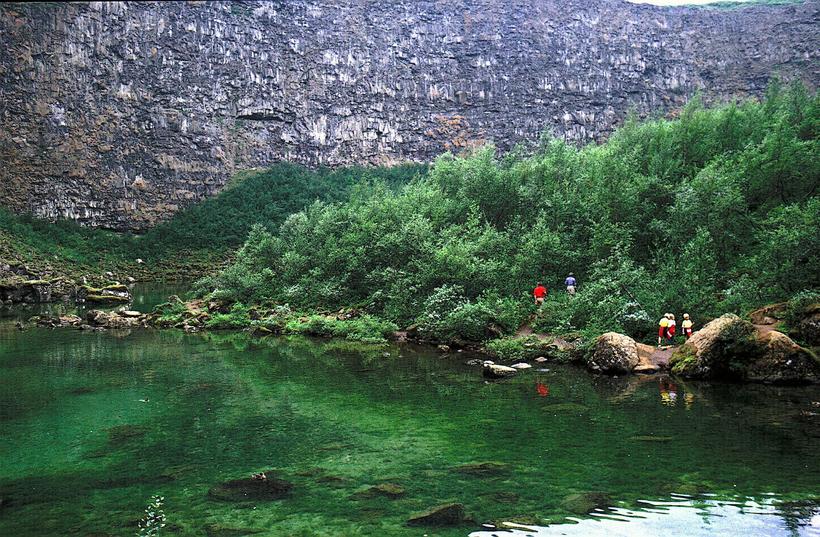 There is a camping area by Ásbyrgi, very popular amongst locals. Photo: Iceland Monitor/Brynjar Gauti

Jökulsá á fjöllum is Iceland 2 nd longest river, flowing over 200 km from its origins in Vatnajökull glacier. It is large and powerful, and has dug its way down cliffs over the years creating the great canyon Jökulsárgljúfur. 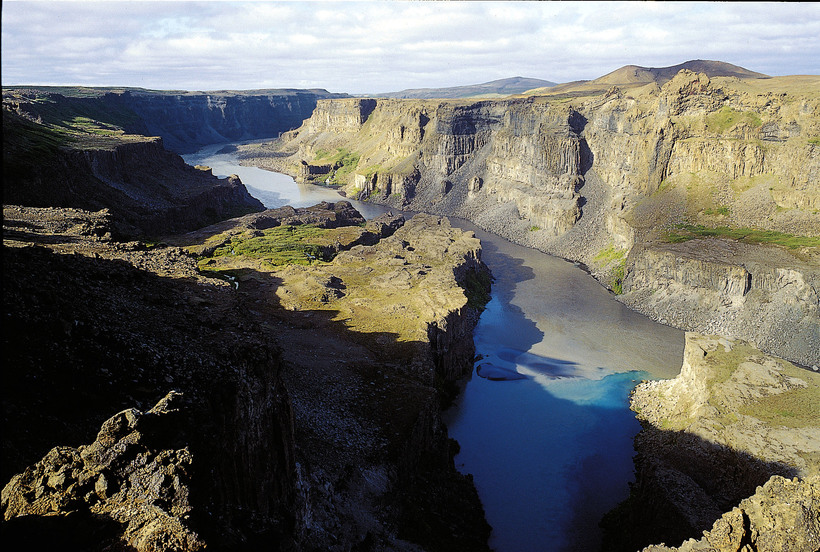 Technically a part of Jökulsárgljúfur, Hljóðaklettar are some of the most impressive rock formations in North Iceland. They somehow lie in all angles, in unique shapes and patterns. Keep in mind that the road to Hljóðaklettar is usually closed during winter. 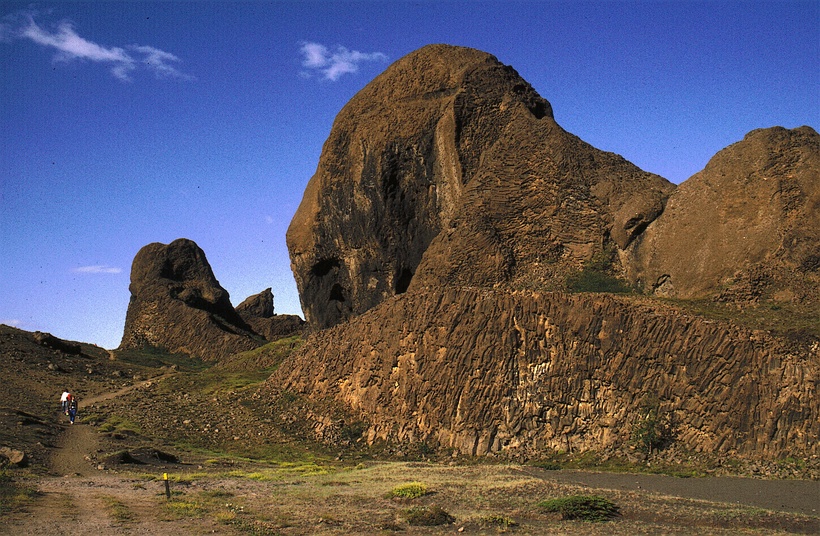 Hljóðaklettar rock formations are something else. Photo: Iceland Monitor/Brynjar Gauti

Dettifoss is the most powerful waterfall in Europe, taking int account the water flow times its fall distance. The power and sheer beauty make it a must see destination in North East Iceland. 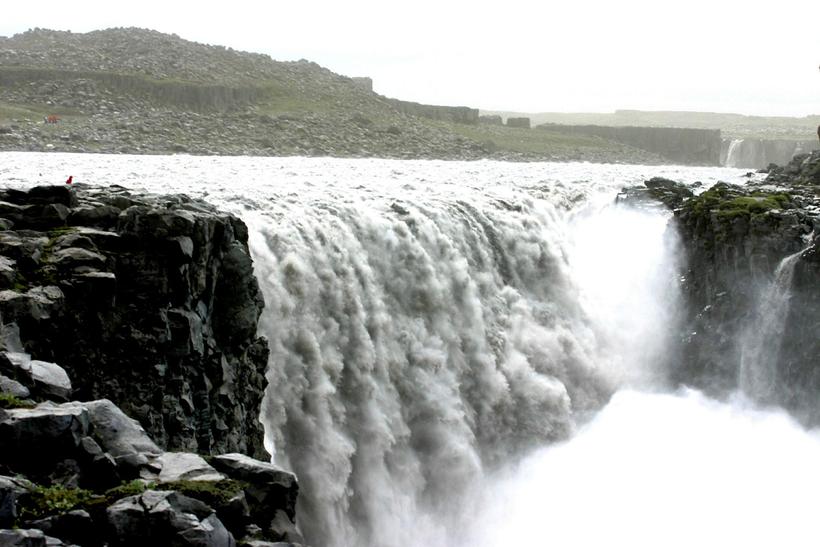 Lake Mývatn is known for striking nature. The blue lake dotted with islands and rocks, surrounded by green vegetation. The area surrounding it is no less stunning and controversial, with lava formation, bubbling hot springs and old craters. 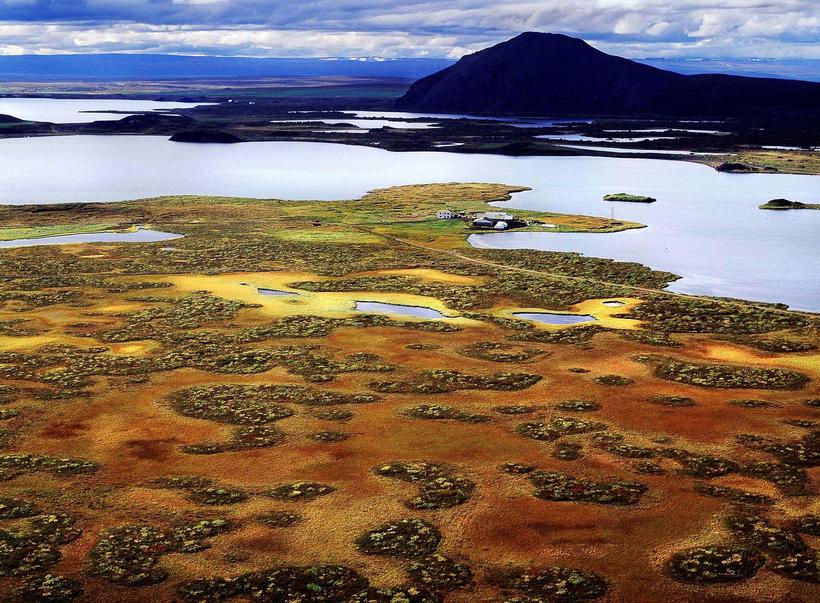 One of the top destinations by Lake Mývatn is Dimmuborgir. They are lava formations in every form and shape. A walk through the field makes you feel like you’re in a maze from another world. 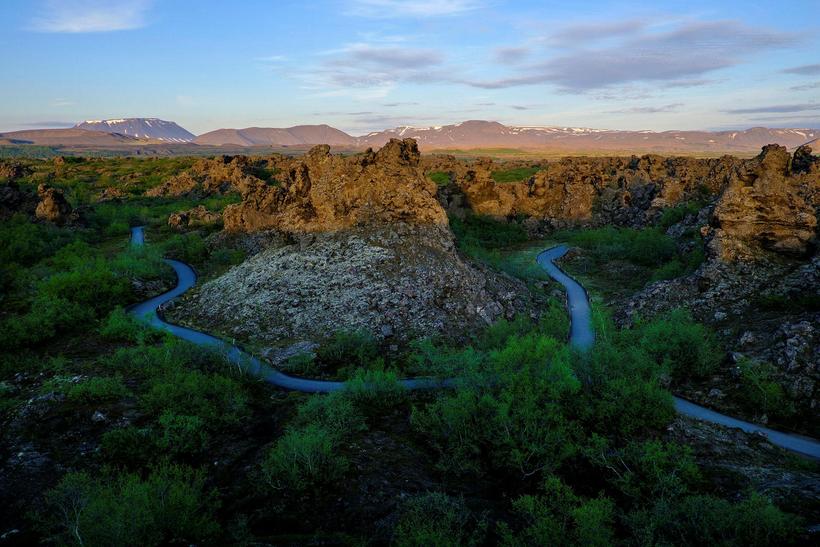 Dimmuborgir is the home of some of the Icelandic Yule lads, who roam around the area on weekends in December. Photo: Iceland Monitor/Golli / Kjartan Þorbjörnsson

Víti is a caldera in Krafla volcano, a short distance from Lake Mývatn. It’s very picturesque with an opaque greenish lake at the bottom of it. It’s lovely to hike around the crater. It takes around 30 minutes but take care as the path can be slippery when wet. 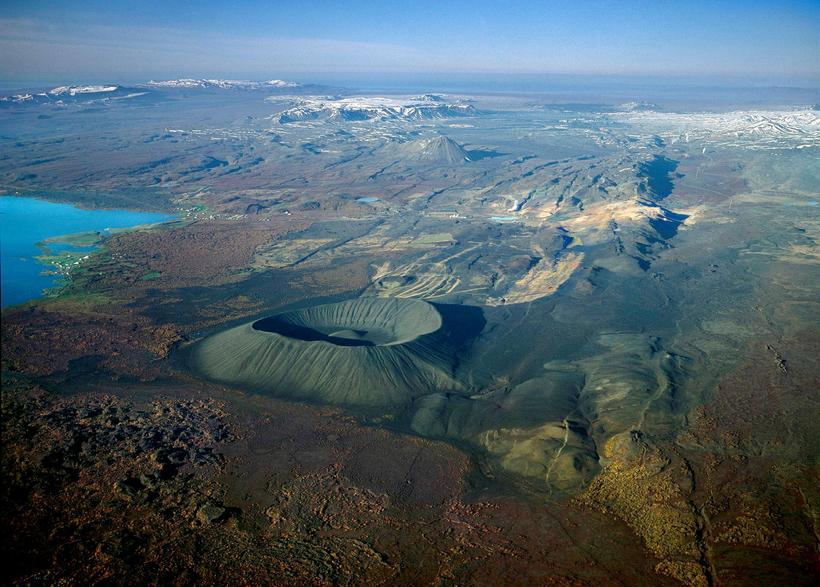 The translation of the name Víti is hell. Photo: Iceland Monitor/Rax / Ragnar Axelsson

Leiruhnjúkar and Námafjall are both geothermal areas where hot water and mud are bubbling all around with its distinctive sulphur aroma. The colours are incredible and it’s easy to lose hours walking around and enjoying the scenery, if you can stand the smell. Both areas are only a short distance from Lake Mývatn. 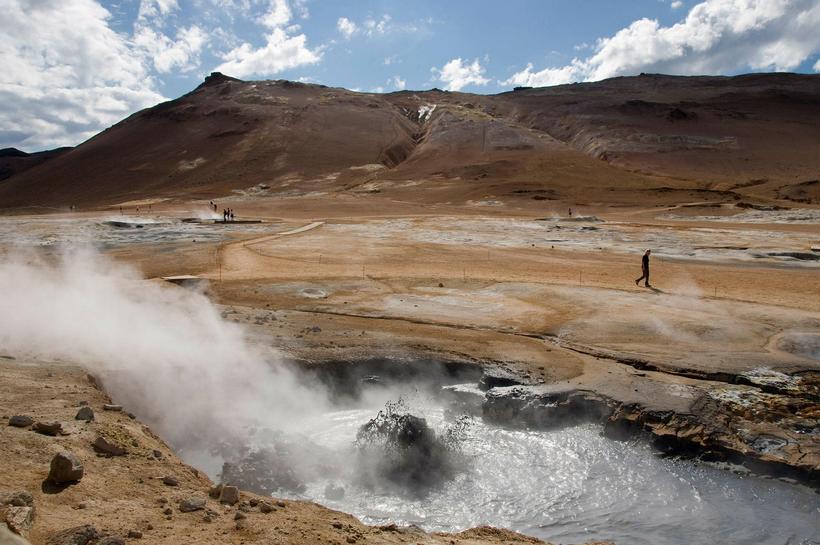 It is very important to take care when walking around hot springs, the bubbling water is hot! Photo: Iceland Monitor/Heiðar Kristjánsson

Húsavík is also known as the town of whales, its main attraction being whale watching. There is even a whale museum in town. Whales are not the only attraction though. The town itself is very beautiful, known for a stunning church, lively harbour and beautiful nature surrounding it. 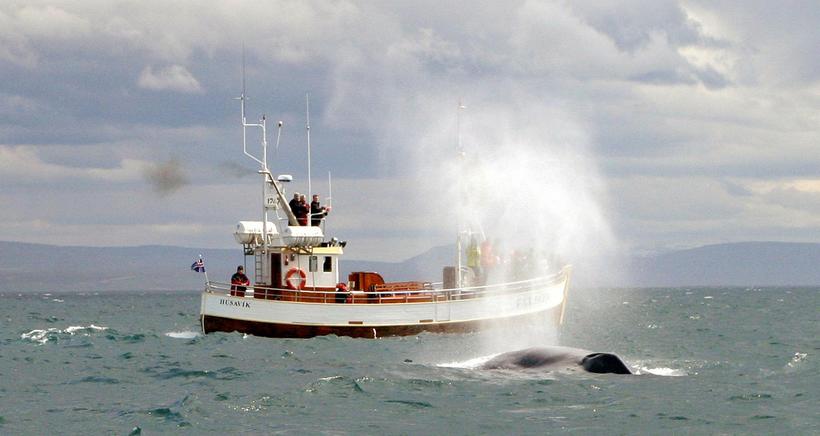 Goðafoss is located just by the nr.1 ring road, 50 km east of Akureyri. It’s one of the largest waterfalls in Iceland and it’s nothing short of stunning. Goðafoss is very large and you can see how it has moulded the earth around it, creating a canyon and what looks like beautiful carvings in the rock.

Vaglaskógur forest is one of Iceland’s biggest forests and it’s a favoured destination of locals to enjoy nature and go camping (not surprising in a country with very few forests). It's so beloved that a song has been written about it, later covered by popular pop/rock band Kaleo.

Instead of driving the nr. 1 highway it’s a lot more interesting to drive north from Akureyri and drive around Tröllaskagi peninsula. There are a lot of little towns along the coast which are fun to visit, where you can find a beer spa, take the ferry to Hrísey Island, visit a gallery/workshop with avant garde art and so on. Many of these placees have great ski slopes if you are passing in winter. This is also one of the best places in Iceland to go heliskiing. The area is known for mountains and cliffs (tröll means troll or giant) and the road of the northern part of the peninsula is high up in places, which makes for a stunning view. Siglufjarðarskarð is a mountain pass at the northern end of Tröllaskagi. It was for a long time the only road to and from the town Siglufjörður. The road is still passable at times, for a 4x4 in the peak of summer. There is also a beautiful hiking trail over the pass, which is 630 high at the top. The view is nothing short of amazing and on a clear day you can see over to the West Fjords. You can also take a bikeride over the pass but as you can see, the slopes are steep.

Drangey island is Skagafjörður’s most famous landmark. The island is basically one giant rock fortress with steep cliffs, covered in birds. The stories associated with the island are numerous, some of the centuries old. There are tours that allow you to visit the island and others where you can sail around it and the other islands of the fjord. The latter more suitable for those who are afraid of heights as the climb up Drangey island is no joke. 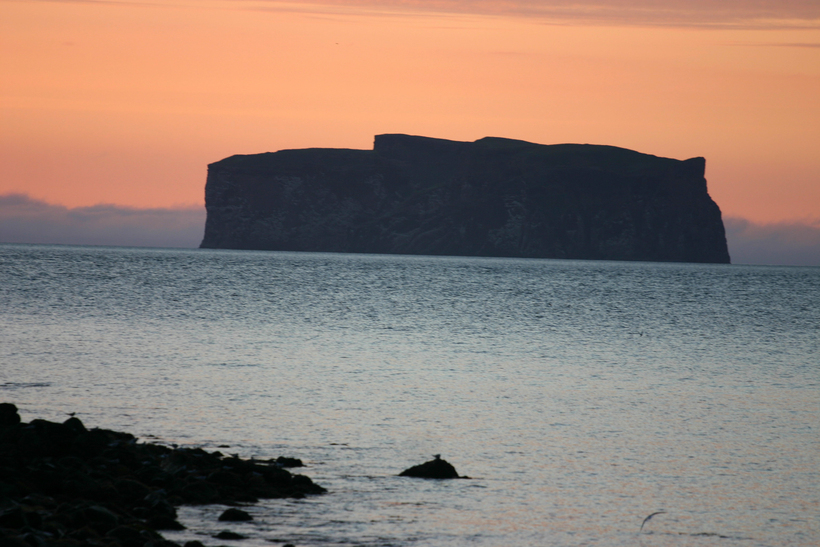 Drangey is the island of elves and outlaws. Photo: Iceland Monitor//Sigurður Bogi Sævarsson

Hvítserkur is without a doubt one of the most picturesque cliffs in North East Iceland, very popular to visit both in summer and in winter, bathed in the Northern Lights. Hvítserkur is 15m high and located just off the beach. It has been sculpted by the sea over the years and has two holes in it, giving it the appearance of a drinking dragon or a rhino. 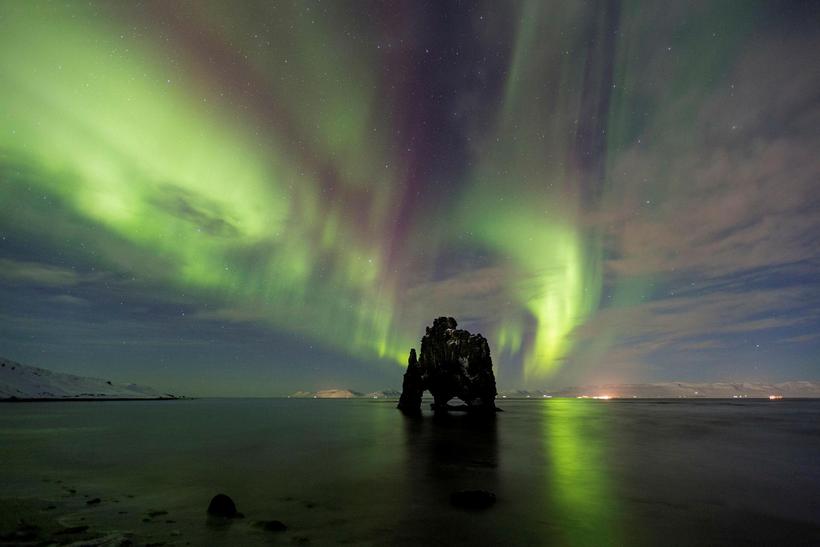 Hvítserkur is one of the iconic landmarks of North Iceland. Photo: Iceland Monitor/Jón Rúnar

Borgarvirki is an old fortress. Or might have been, it’s what the folk tales tell but there are no evidence to that. It’s on hill and looks much like an ancient fortress, very impressive and the view is stunning. The road lies up the hill just by Borgarvirki so the hike from the parking lot takes all of four minutes, very handy. It’s also very close to Hvítserkur so, two birds and one stone. 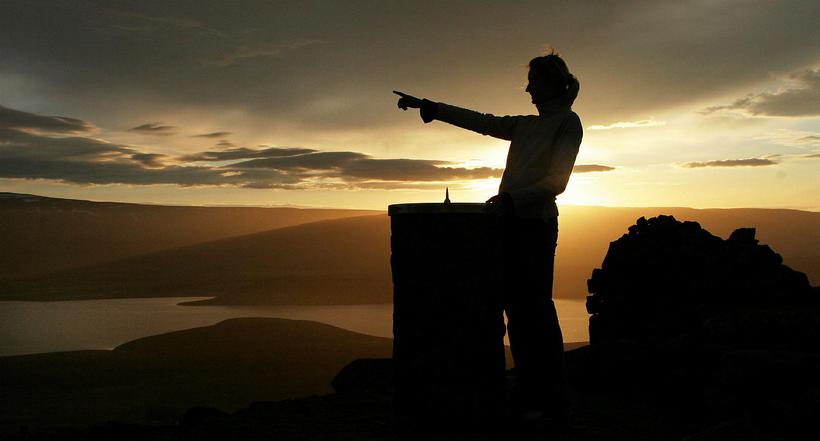 The view from Borgarvirki is stunning. Photo: Iceland Monitor/Eggert Jóhannesson

The western part of Vatnsnes peninsula is particularly known for the amount of seals that like to chill out on the beach. The only town on Vatnsnes, Hvammstangi, is the home of the Icelandic seal centre, where you can go to get information about the seals. They also have great seal count every summer, where volunteers are welcome to join in and help out. 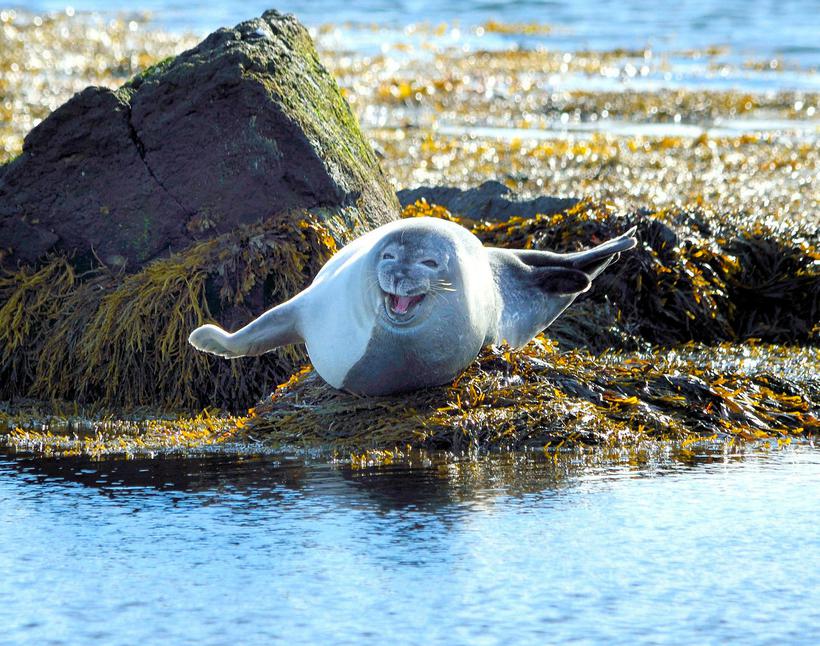 Víðidalsá River runs through Kolugljúfur gorge, in the far end of Víðidalur valley. The gorge and the waterfalls that run through it are breathtaking, and they are both named after a female troll called Kola. The access is easy, you turn into Víðidalur to a farm called Kolugil, by that you can see the calm river cascade down the gorge.