Hvítserkur is a basalt stack with a peculiar shape, it stands on the beach by Vatnsnes peninsula. Photo: Árni Torfason

There are many places that few of those travelling around Iceland venture. One of these places is Vatnsnes peninsula, a rural Icelandic environment that offers so much more than meets the eye at first glance.

I have driven past Vatnsnes hundreds of times as it sprouts out from the ring road just under 200 km from Reykjavík, and have never given it much thought. Which probably says more about me than the area, since it is only a 90 km long and therefore a nice detour when travelling on a good day.

It was only recently that I and a friend finally gave ourselves the time to see the sites we knew of in the area and hopefully discover some more.

We entered road 711 around the peninsula by the very small town of Hvammstangi, where you can find The Icelandic Seal Center and the most crowded gift shop I have ever seen in my life. 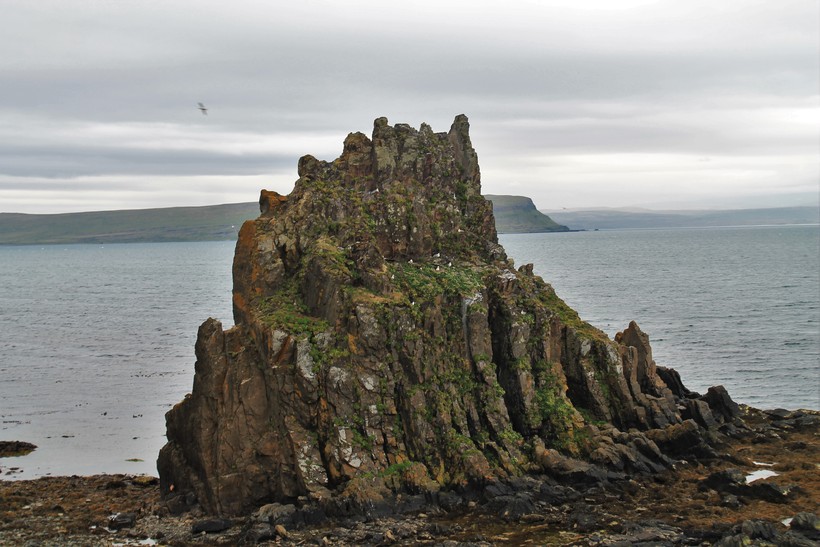 Ánastaðarstapi is a home to a great number of birds over the summer. Photo: Sóley Björk Guðmundsdóttir

Driving past the town we stopped at the next sign indicating an interesting place (I had no idea what the sign stood for. Like so many other Icelanders I detest preparing for trips, I rather start off and figure things out on the way). This interesting place was Ánastaðarstapi, a great rock rising from the beach by the farm Ánastaðir. There is a small parking place from where the rock can be seen and a path that leads to it. I recommend the hike as the rock is beautiful up close and a home to a great number of birds.

There have been numerous research on the seals that linger on the shore of Vatnsnes. Rax / Ragnar Axelsson

The bay by the peninsula is called Húnaflói, named after polar bears. The animal the area is best known for is however not a polar bear which seem to prefer the next fjord, but the seal (thus the centre at Hvammstangi). There is a great number of seals that love to “sunbathe” on the shore of the peninsula, and there are a few places to park a car and walk down to the shore to take a peek at them, which we did. 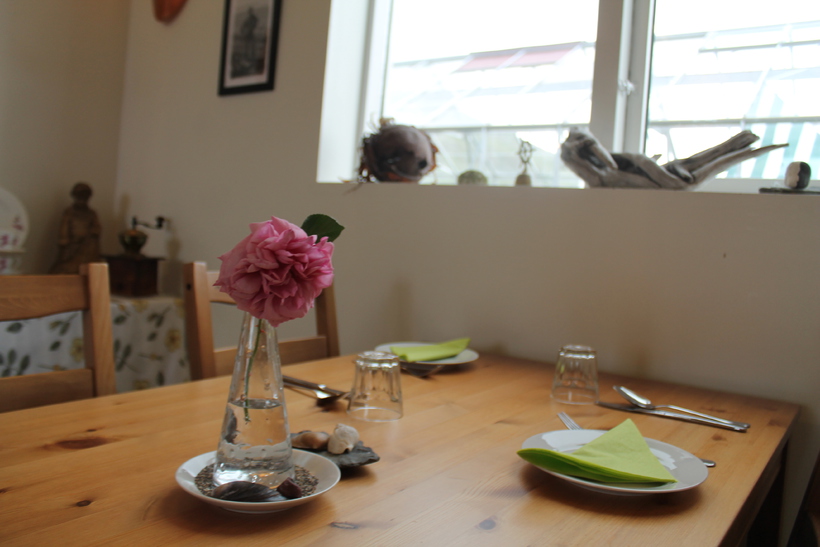 The decour at the restaurant Geitafell is mostly from the nearby beach. Photo: Sóley Björk Guðmundsdóttir

The next sign to spark our interest did not mark an interesting place, but a seafood restaurant. There is not much around except farms, Hvammstangi is rather far off and the town is very small, so a restaurant was very surprising, let alone one that specialises in seafood. We found ourselves compelled to explore. The restaurant is called Geitafell and has a very simple seafood menu served with salad grown in the backyard, and a nice selection of traditional Icelandic pastries for desert. What was even more surprising was the flexibility of the chef, who whipped up a dairy free seafood soup and was sorry that the gluten-free bread was finished. Such catering to special-need customers is not even easy to find in Reykjavik, let alone rural Iceland. What more is that the food was delicious! 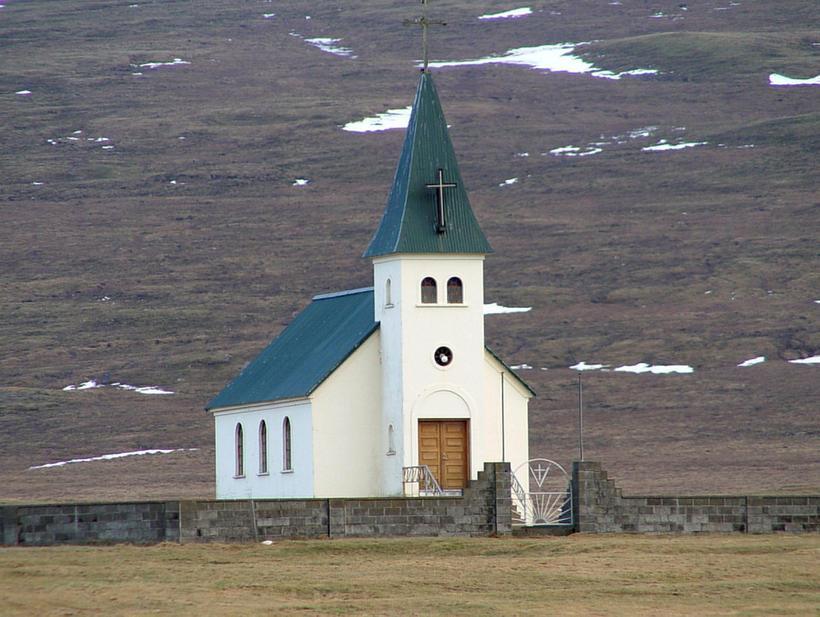 Buried in the cemetery at Tjörn are Agnes and Friðrik, the last people executed in Iceland. Photo: Sigurður Ægisson

The church at Tjörn seems at first glance like any other church, what is special about it is who lies in the graveyard and why. The couple Agnes Magnúsdóttir and Friðrik Sigurðsson (usually referred to as just Agnes and Friðrik) were the last people executed in Iceland. They murdered two men, were sentenced to death and their heads were placed on pikes to warn others. The next chapter unfolds in 1932 when Agnes calls on a woman named Sesselía Guðmundsdóttir, and starts writing messages through her. Agnes asks that their bodies will be dug up and reburied in a cemetery. She describes the exact location of their burial place, as well as where their heads had been buried, and that there was a splinter in her skull from the pike. Guðmundsdóttir was not keen on acting on the wishes of a ghost but finally gave in and with a help of a friend got permission from the bishop and the county government. Their bodies were found at the location described from beyond, with the wooden splinter in Agnes’ head as described. The bodies were taken to Tjörn where they finally got a proper funeral and were buried in the the cemetery surrounding the church.

The next part of the journey was perhaps the most difficult. Not for any obvious reason, the view from the northern part of the peninsula is gorgeous, looking over to the majestic peaks of the West Fjords. I had to keep reminding myself to take my eyes off the view and keep it on the narrow gravel road. 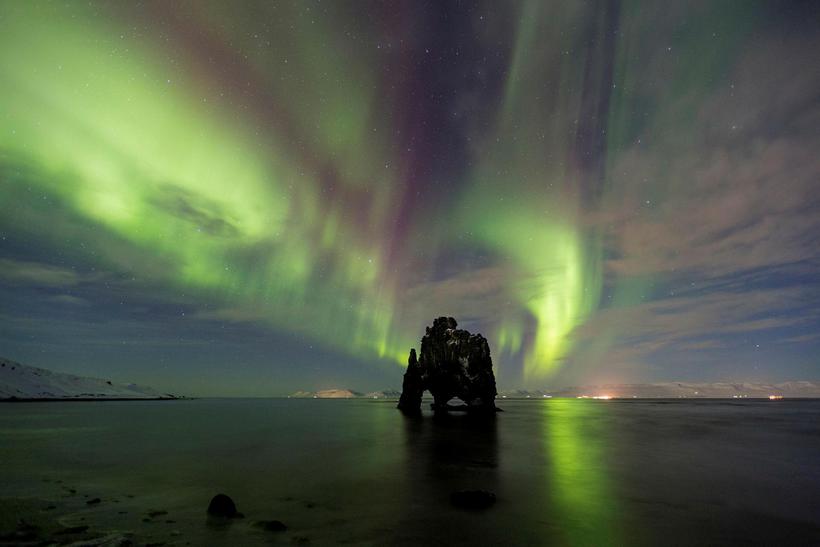 Hvítserkur is a popular destination over the winter for those interested in photographing the northern lights. Photo: Jón Rúnar

On the east side of the peninsula there is a 15 m high basalt stack with two holes in it, called Hvítserkur. It is truly magnificent, rising high up from the sea so high and narrow that one wonders how it is still stands. It cannot be seen from the road, we had to take a turn and drive down to the edge of a hill where there was a deck to look over Hvítserkur. It is also possible to climb down to the shore to have a better look, and if the tides are low you can even walk up to it. 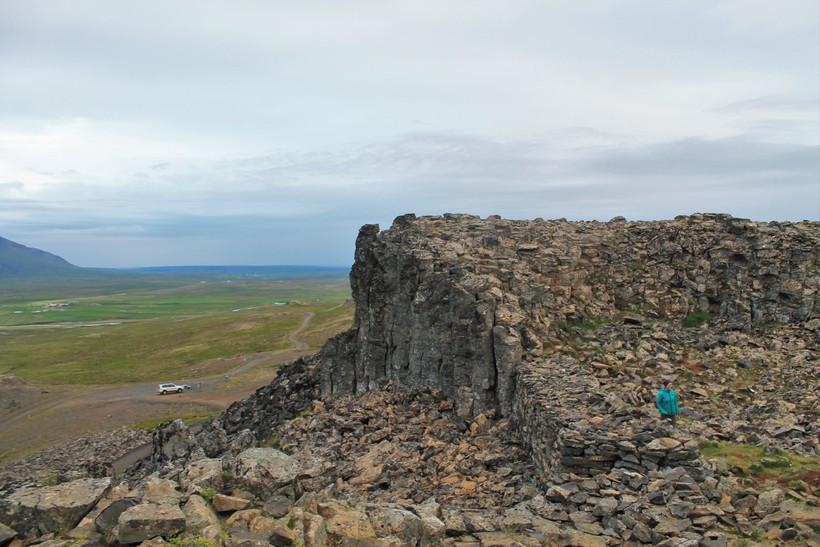 Borgarvirki is only 20 km. from the ring road, a lovely small detour if there is not time to go round the peninsula. Sóley Björk Guðmundsdóttir

Borgarvirki is a volcanic plug that is 177 m high (don’t worry about climbing, the road lies almost to the top), which stories tell used to be a fortress. It undoubtedly looks like a fortress, but it is not mentioned in the sagas and there are no clear evidence to support the theory. There is however a fun folk tale about a small army that was under siege at Borgarvirki. When their food was just about drained the chieftain threw blóðmör (Icelandic blood pudding) out of the fortress, the very last food they had. The enemy army drew the conclusion that there was still plenty of food in the fortress so they gave up and left.
History and stories aside, the crater very impressive. There is a pile of pointed rocks around it half covered my moss, and you can imagine an enemy army sieging, another army laughing behind the thick walls. I recommend climbing up to the wall of the “fortress”. The view is absolutely phenomenal as the area surrounding is rather flat, there is also a disk with the names of every mountain and glacier in sight. 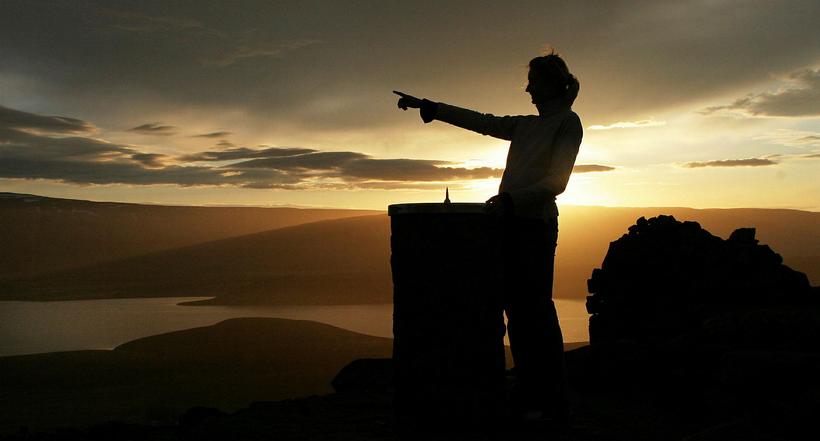 At the wall of the "fortress" is a disc with the names of all the surrounding mountains and glaciers. Photo: Eggert Jóhannesson

This short detour ended up taking a bit more time than we expected, there was so much to see and do. The good thing was that we were travelling around the time of the summer solstice, so even though it was getting late the sun was still up. The late hour actually made the Borgarvirki and Hvítserkur even more stunning, there is always something majestic about experiencing nature in the midnight sun. 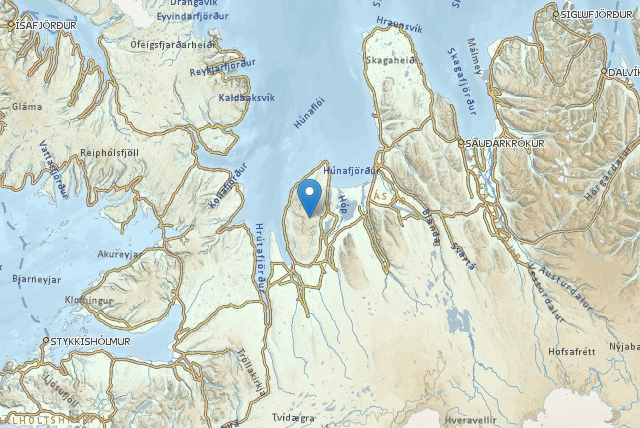 Vatnsnes is located in the North Iceland, near the town of Hvammstangi Map.is