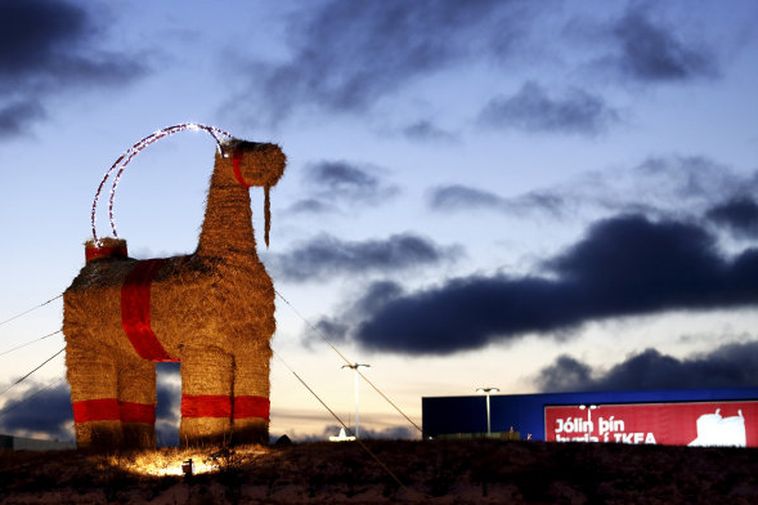 The IKEA Christmas goat is installed in front of the IKEA store in Garðabær, south of Reykjavík, every October, as a symbol of the Christmas season.This is the twelfth year the goat has been installed in Iceland.

Made of straw, Iceland’s largest goat weighs between seven and eight tons and is close to 7-m (23-ft) tall. In spite of its large size and strong and build, it hasn’t always survived the Christmas season.

It has gone up in flames, when set ablaze by vandals in 2010, 2012 and 2016. In 2013, an electrical fence was erected around it to fend off vandals, and in recent years, it has been monitored by a security team day and night.

Mbl.is reports that its Swedish sisters, too, have frequently been the victims of vandals. Since 1966, when IKEA installed its first goat, 38 such goats have been set afire in Sweden. Such a crime is punishable in Sweden with up to a three-month prison sentence. Still, last Friday, the goat in the Swedish city Gävle suffered such a fate.

As for the goat in Iceland,it burned to ashes in 2015, due to malfunctioning Christmas lights, with which it was decorated. Icelandic wind, too, has expressed animosity toward the goat by blowing it down in 2011 and 2013.

At present, the goat is securely fenced off with an electric fence and monitored day and night by security guards and security cameras, according to Guðný Camilla Aradóttir, head of IKEA’s department of social responsibility and communication in Iceland. Since 2016, those have sufficed to protect the decorative animal.

Judging by the weather forecast on vedur.is, an attack on the goat by the wind in the coming days seems highly unlikely.