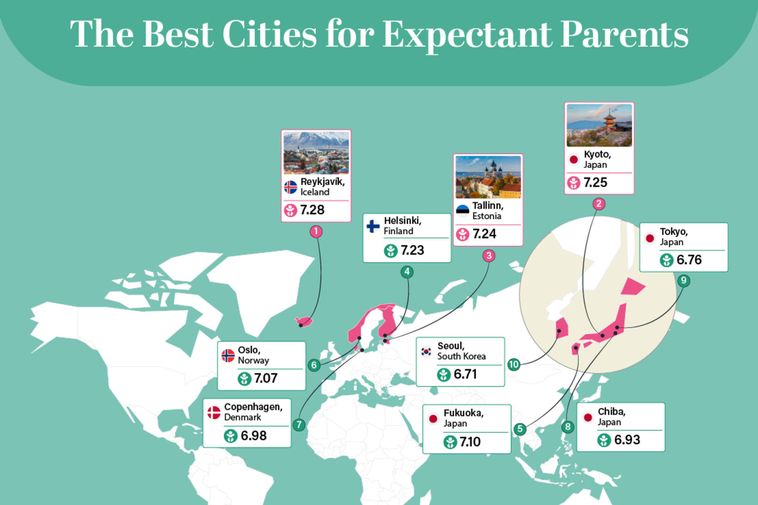 New research, conducted by the expat insurance company William Russell, reveals that Reykjavík, Iceland, is the best city to become a new parent.

The study analyzed 50 global cities for a number of factors, including maternity and paternity leave, pre-school costs, fertility rates and safety to reveal the leading places to live when becoming a parent. You can view the full research here.

Ranked at the top is Reykjavík, Iceland, with a pregnancy friendly score of 7.28 out of 10.0. Reykjavík scores particularly well for environment and safety, with a safety index score of 78.03 and a pollution index score of just 15.01. In addition, the city has low child care costs and high fertility rates.

Second in terms of the pregnancy-friendly score is Kyoto, Japan, followed by Tallinn, Estonia, Helsinki, Finland, and Fukuoka, Japan. All of the above receive a score of more than 7.0.

Reykjavík, too, tops the list of cities with the most children participating in formal early education and care services. On that list, it is followed by Amsterdam, the Netherlands, Seoul, South Korea, Paris, France, and Oslo, Norway.

In terms of the least pollution, Reykjavík ranks second behind Helsinki, Finland, and it ranks fourth on a list of cities with the highest fertility rates.