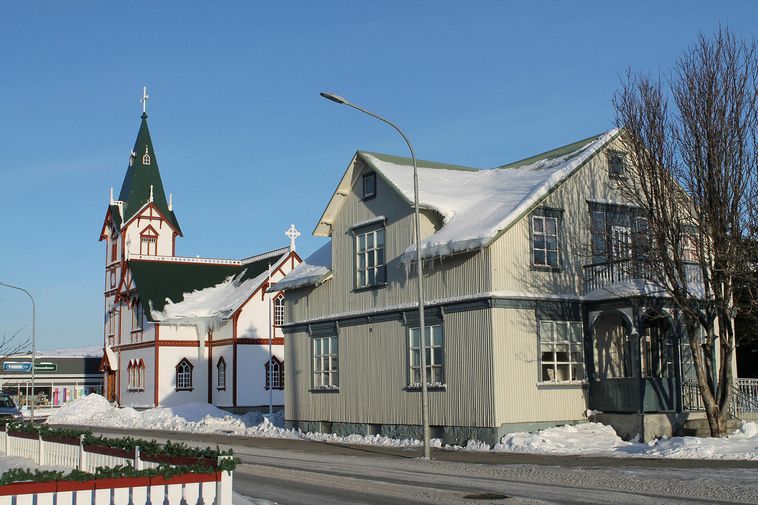 Húsavíkurkirkja church in Húsavík, North Iceland, is in need of major repair. Many people consider it to be the most beautiful church in Iceland. It was designed in the so-called Swiss chalet style by Iceland’s first architect, Rögnvaldur Ólafsson, who had been educated in Denmark. Not only was he an excellent architect, but a good carpenter as well, and the church was considered a major success. It was built in the shape of a cross, using wood imported from Norway, and consecrated in 1907.

Since then, a lot of water has passed under the bridge, and now the wood in the church tower and elsewhere is rotting, Morgunblaðið reports. Repairs are badly needed, but they will be costly, and the church council is wondering how to fund the project. The congregation hall, designed, too, by Rögnvaldur Ólafsson and located next to the church, is in need of repair as well.

“Every crossbeam on the outside of the church tower is rotten and in need of replacement,” states Guðbergur Rafn Ægisson, caretaker of the church. “Many decorative trims are badly damaged from rot and need to be replaced.” The list goes on and on, and it is clear that extensive repairs are needed.

While the church windows are in a relatively good condition, those of the congregation hall are leaking and in need of replacement. On the latter building, all the corrugated iron needs to be replaced – on the walls as well as on the roof.

The church council met in January to discuss the problem and agreed that tens of millions of Icelandic krónur were likely needed for repairs. The idea of founding an association in support of the church was discussed. Such an association would then seek funding from friends of the church, including former residents of Húsavík. The possibility of the municipality’s participation was discussed as well.

Much is at stake, because for more than a century, the church has been the town’s pride and center of attraction.