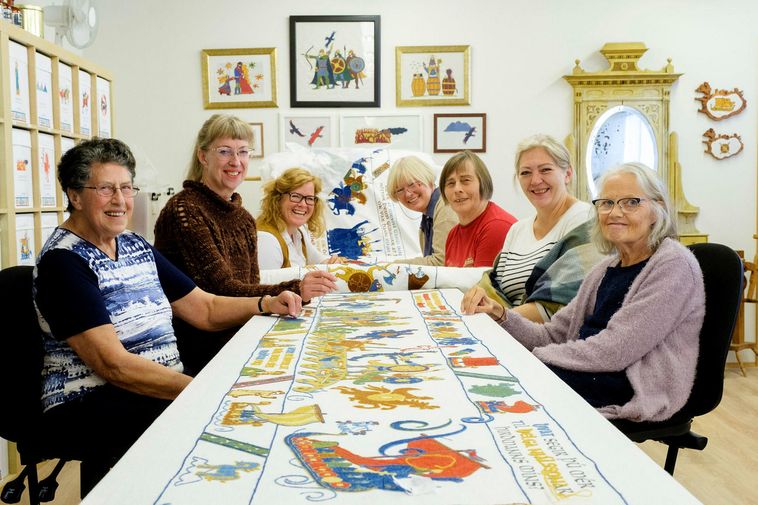 On the final stretch of the project. A happy group of volunteers. mbl.is/Kristinn Magnússon
Vala Hafstað
vala@mbl.is

Njal’s Saga, the best-known among the sagas of the Icelanders, will finally be completed tonight - on tapestry, that is. Since February 2013 – for seven years and seven months - a group of about 20 women have gathered two nights a week, needle in hand, at the Icelandic Saga Centre in Hvolsvöllur, South Iceland, to sew a 90-meter-long tapestry depicting this famous saga, Morgunblaðið reports.

The location for the project is no coincidence, for this part of the country provided the setting for Njal’s Saga.

A Bayeux stitch, or laid couching work – a stitch used in the Viking Age – has been used for the project. The yarn is a type of Icelandic woolen yarn that has been dyed locally, using natural herbs. On average, about 13 meters have been sewn every year, according to the tapestry’s website.

Artist and literary scholar Kristín Ragna Gunnarsdóttir designed the pictures that were printed on the tapestry to be sewn.

All the work has been done on a voluntary basis, and numerous people have taken part in the project in addition to the core group of 20. Visitors to the Saga Centre who over the years have wished to take part in the stitching have received instruction and then recorded their name in a special book, along with the part of the project they have completed.

Shortly, the tapestry will formally be delivered to the local government of Rangárþing eystra, South Iceland. It remains to be seen where the public will be able to “read” this colorful version of Njal’s Saga, since suitable housing for it is still being sought.