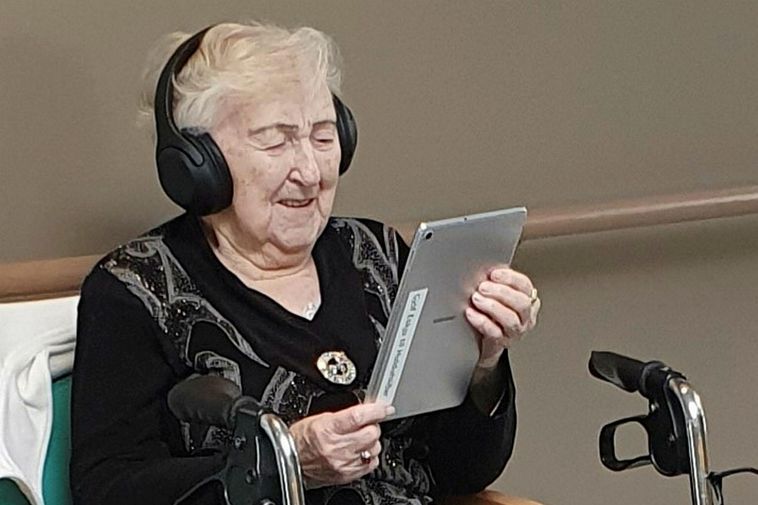 “I love being able to talk to people,” 102-year-old Anna Hallgrímsdóttir, who lives at the nursing home Hulduhlíð in Eskifjörður, the East Fjords, tells Morgunblaðið. By using an iPad, she was able to speak to a reporter yesterday and see his picture, too.

The residents of Hulduhlíð, as well as those of Uppsala nursing home in Fáskrúðsfjörður, farther south, are able to connect with relatives this way, because four iPads have been donated to each nursing home.

This makes life easier for them, since no visits have been allowed at Icelandic nursing home since the COVID-19 outbreak began.

“I receive many calls a day, and I have received many today, from Akureyri and from here and there,” Anna states. She was born August 7, 1917. She was 14 months old when the Spanish flu spread to Iceland in October of 1918 – a pandemic that was much talked about when she was growing up.

When asked whether the discussion about COVID-19 resembles what was said about the Spanish flu, she responds, “I may not be the right person to tell, but it wouldn’t surprise me if similar things are being said now, compared with what I heard back then.”

She is asked how she spends the day. “I don’t do a thing other than think about life, the way it is. That’s all you can do at this age,” she responds.

To what does she attribute her good health? “As I’ve said before, I’ve always used cod liver oil, which I strongly recommend,” she answers.

The iPads were donated to the nursing homes, where a total of 40 people reside, by the companies Eskja in Eskifjörður and Loðnuvinnslan in Fráskrúðsfjörður. The company Krossavík in Reyðarfjörður donated headphones to accompany the iPads.