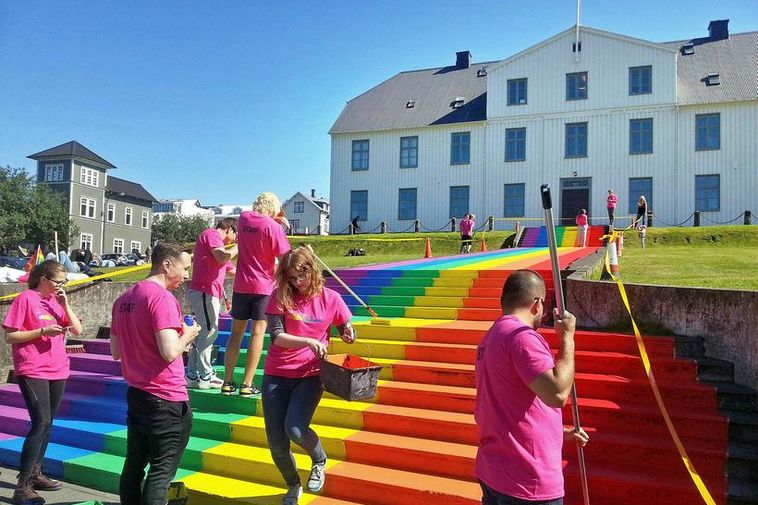 In 2016, the steps in front of Menntaskólinn í Reykjavík junior college were painted in celebration of Reykjavík Pride. mbl.is/Ómar
Vala Hafstað
vala@mbl.is

The opening act of the six-day festival includes the painting of a rainbow on Klapparstígur, starting at noon, between Laugavegur and Grettisgata.  It is recommended that you bring your own paint brush. Also today, a queer literature walk will be offered by Reykjavík City Library at 6 pm. It will be conducted in Icelandic.

The opening ceremony is planned for tonight at 9 at Háskólabíó cinema, where 20 years of Pride in Reykjavík will be celebrated with a focus on what has been accomplished.  Numerous musicians will make an appearance.

Tomorrow, at noon, the Stonewall Riots will be remembered at the National Museum of Iceland. Fifty years have gone by since the riots at the Stonewall Inn in Manhattan, New York City, widely considered to be the event that paved the way for the gay liberation movement.

Other events tomorrow include a sing-along show of The Rocky Horror Picture Show, the Icelandic Royal Drag Competition, and a crowning party.

On Saturday, the program continues with a drag brunch at Tjarnarbíó cinema, the Paradise Garage disco at Loft Hostel, and the 90s party Pink Party Pride Edition in Iðnó.

A family rainbow festival is planned in Klambratún park at 11 am, Saturday, and a party is scheduled in the evening.

Throughout next week, movies and all sorts of educational and musical events are planned, in addition to art events and walks.

The highlight of the festivities will no doubt be the Reykjavík Pride Parade, which starts at 2 pm on Saturday, August 17. Year after year, this colorful parade has drawn huge crowds of people.

Finally, the closing party is the Reykjavík Pride Party, scheduled at 11 pm on Saturday, the 17th, at Austurbær on Snorrabraut.

To view the full schedule, subject to change, click here.