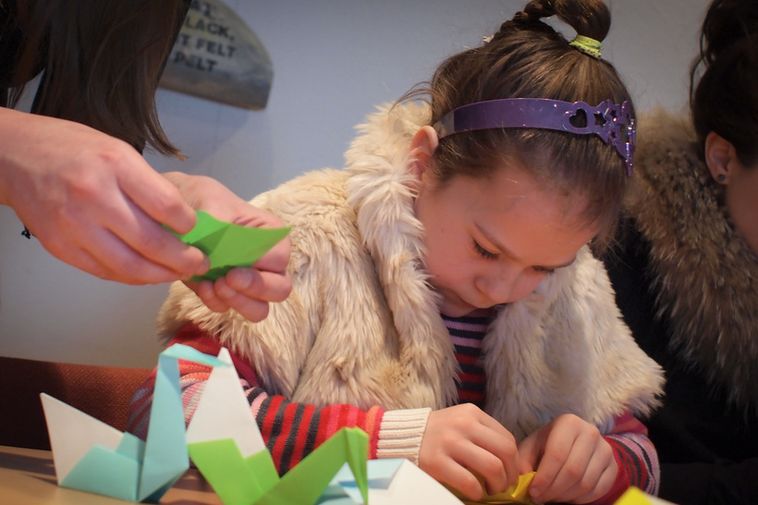 World Children’s Day is on Saturday, 18rh of February, at the start of the winter holiday at Reykjavík’s primary schools. Photo/ City Library

On World Children’s Day, which is now being held for the 14th time, children and their parents will have the opportunity of taking part in a variety of interesting workshops and enjoying events of many types in the Reykjavík City Library’s branches (cultural centres) all over the city. World Children’s Day is on Saturday, 18February, at the start of the winter holiday in Reykjavík’s primary schools.

This year the day will have a Japanese theme. For example, there will be an opportunity to find out about Japanese manga comics, to make Japanese wishing lines, to try on a kimono, to have your face painted in the Japanese style, to make a Noh mask, make a kite, write your name in Japanese characters, taste green Japanese tea, search for pokémons, learn the basics of ju-jitsu and many other things.

Events will be held in the Reykjavík City Library’s branches in Gerðuberg, Spöngin, Kringlan and Sólheimar.  Further details of the programme at each location can be found on the library’s home page, borgarbokasafn.is, in both Icelandic and English, and on the Facebook pages of each of the centres.

Don’t miss World Children’s Day. Everyone is welcome, both children and adults – and admission is free!

Who would you like to turn yourself into – the sly fox Kitsune, or the red goddess Hannaya, who is so jealous that her eyes are golden, or maybe the angry devil Shikami? Come and make Japanese masks with us, and protect your home against evil spirits!

Japan has a strong tradition of mask making. With masks, there can be a huge difference between a person’s outer appearance and inward character. They can bring good fortune and protect the wearer. The theatrical “Noh-men” masks are treated with great respect, and some of them go back more than a thousand years!

This workshop will be directed by Ingibjörg Huld Halldórsdóttir and is suitable for all age groups. Participants can make more than one mask each, and of course they get to take them home.

Kites in the Japanese manner

Kites were introduced into Japan from China in the period 650-750 AD, a century or more before the first settlers arrived in Iceland. They soon became part and parcel of celebrations of various types. The Japanese even developed special kite designs to suit the local conditions in parts of the many islands that form the country.  They tried to make them as large as possible, and sometimes it was not possible to bring them down without them breaking up on landing. With the proliferation of power-lines, kites are not seen as often now in Japan as they once were; nevertheless they are still used in festivals such as Hamamatsu in early May.

The kites made in this workshop in Gerðuberg under the direction of the designer and art teacher Arite Fricke will follow the basic Japanese traditional designs and be in the form of fish, birds and butterflies – all as strange and as colourful as you want.  Children of all ages are welcome, accompanied by their parents.

Japanese writing is not based on an alphabet of letters like Icelandic; instead, there are symbols for each sound, called kanji. In this workshop you can learn to write your name (or some other words) in Japanese symbols and take them home with you.  We will also make beautiful origami figures of folded paper.

Colourful kimonos with beautiful patterns are the national Japanese costume for both women and men, tied with a belt called an obi. Come and see what you look like in Japanese clothes! If you want, you can also have your face painted in the Japanese style and have your photo taken – it will look as if you have actually gone to Japan!

Ju-Jitsu is the Japanese art of self-defence and is more than 2,000 years old. In this workshop you can learn some of the basics of this ancient sport and watch others showing off their skills.

At the Sólheimar branch of the library there will be an Origami Workshop under the direction of Ragnheiður Harpa Leifsdóttir. Guests can also write down their wishes and hopes and hang them on a wishing line. And while making origami figures and delving into their wishes, they can sip delicious green Japanese tea.
All welcome while there is space.

Find five pokémons in the Sólheimar library and make up a word from the letters you find on them. One lucky participant will get a prize!

Ping Pong, noodles and the salaryman: a cartoon workshop based on the Japanese ‘manga’ comic tradition

A chance to find out about the world of the Japanese manga comics and create a story of your own under the direction of the comic-series author Þórey Mjallhvít. Comics are the ideal means of telling a story and this workshop will suit people with all levels of drawing skills and experience.

Paper lanterns originate from Asia and have been around for thousands of years. In Japan they are known as ‘Bonbori’ and ‘chochin’;  these beautiful lights are made in all sorts of designs and sizes and in every colour of the rainbow.

Make your own lantern and take it home.

On World Children’s Day, the designer Ninna Þórarinsdóttir will be holding a workshop in the Spöngin Cultural Centre (the Reykjavik City Library branch at Spöngin) under the title ‘Hidden curiosities’, using objects from a project called ‘The collection of imaginary and curious objects’.

This collection is a treasure-trove of extraordinary objects that have been found all over the world, some of them in Japan. On World Children’s Day they will be hidden here and there in the library at Spöngin, and everyone, old and young, can take part in looking for them and imagining the story behind them and guess whereabouts they might be from in Japan.

The workshop is open to people of all ages who want to look for these objects in the library, think about them and the write stories or draw pictures based on the ideas they awaken in them.

Children and their families are welcome at this open technology and experimental workshop in music programming in Spöngin. Members of Kóder will direct programming through music in a two-hour-long workshop.  Participants please turn up on time! You can learn to program your own music, or music that is familiar to you, through the Sonic Pi music program.

If lots of people turn up for this workshop it may be necessary to share computers and take it in turns to use them.  It is a good idea to bring a USB flash drive so as to be able to take the results of your work home with you.

The course is pitched mainly for the 6-12 age group, but both older and younger technical wizards will be welcome to come and find out what is on offer from Kóder.

An excellent opportunity for children, and also for their parents, to come and get hands-on experience about music programming and the things that can be created with it.