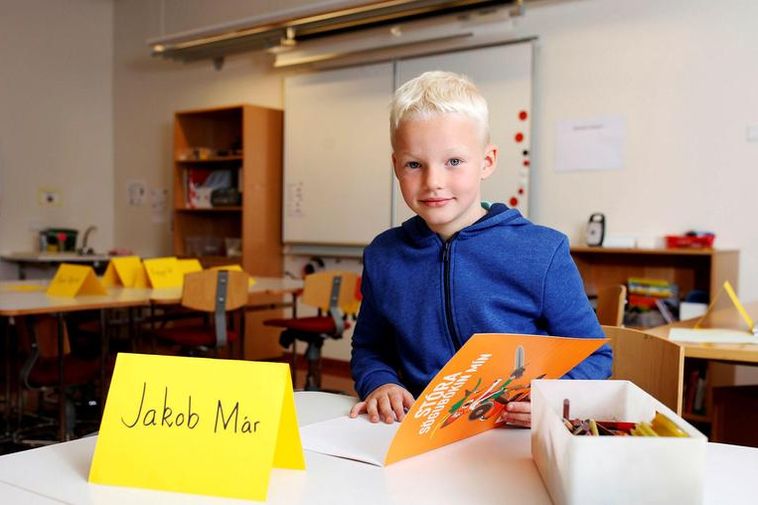 Jakob Már Kjartanson is excited about his first day at school. mbl.is/Eggert Jóhannesson

Jakob Már Kjartansson is six years old and  has just started school at Vatnsendaskóli. He's not shy he explains because he knows his teacher really well, as he's met him on a couple of occasions.

He also knows a few classmates who were with him at playschool. He's also lucky enough to share a desk with his best friend. But they're all his friends though, the whole class. "I've also met a new friend. His name is Birkir but he's not in my class."

On his first day at school he learned quite a lot. He prefers natural history and got to look at a skeleton. "I wasn't afraid to touch it. It wasn't alive. I mean it wasn't a person, it was bought in a shop."

Asked what he's most looking forward to learning he replies, "Maths." He says he's good at counting his money which consists of no less than six thousand three hundred and forty kronur. He's also an avid counter of cans. "I'm going to collect five hundred cans next time," he says and works out that this would bring him considerable revenue.

"I also look forward to doing homework, because then I can be alone. Sometimes I disturb my brothers when they are doing their homework," he says and smiles.

Jakon Már is practising football but would like to begin handball practice. He's also starting to learn to swim at Vatnsendaskóli this year, with the children travelling to the pool by coach. He's very excited about that as well.