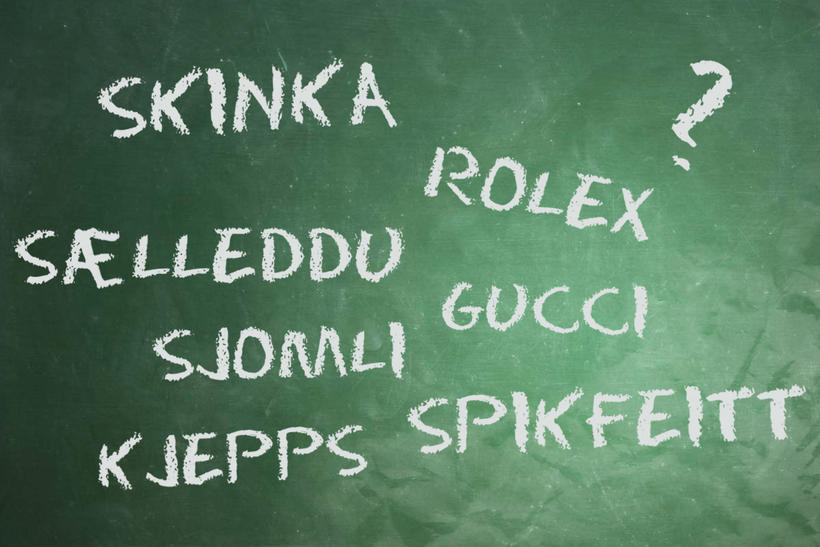 What on earth are Icelanders on about when they use slang like rolex, gucci, skinka and hnakki? Here's a quick urban dictionary.

A "skinka" is a  woman who is very suntanned, has very bleached hair or obviously dyed brown/black hair, likes to wear very tight clothing, big hoop earrings, hair extensions, false eyelashes, too much make up, whitened teeth and sports strange overplucked and dyed eyebrows. Skinka actually means "ham" in Icelandic. Other variants are "parmaskinka" (parma ham - an aged skinka) and a spúútnikskinka - a skinka who possibly goes to art school and has moved to 101 Reykjavik and wears hoodies and vintage clothes but still looks like a skinka. A skinka is the female version of the hnakki, see below.

A "hnakki" or an "FM hnakki" literally means "neck" and is slang invented in the 90s by two prominent Icelandic musicians. It describes men, possibly from the suburbs,  that are so tanned that they're orange, have highlighted or dyed hair, possibly shaved on the back and sides, go to the gym a lot and listen to bad techno music. You mostly find them at the gym, at a mall, as radio station hosts or cruising down Laugavegur in a converted car with something like Basshunter blaring from the windows.

Feitt means fat in Icelandic. It's used by teenagers to describe things that are not, as the word implies, vertically challenged but for something cool or positive. "Þetta er feitt," (This is fat) means "This is cool." Probably taken from the English nineties slang p.h.a.t (pretty hot and tempting). An exaggeration of the term is spikfeitt which literally means huge or obese and is used to describe something supercool.

Slang that has been popular for decades to describe the act of partying hard. Probably somehow derived from the English "to jam" with the meaning changed. "Að djamma"... to party... could mean anything from getting very drunk at one of Reykjavik's nightspots or taking copious amounts of drugs. Sometimes just shouted out by random drunk people in the street who like to vocalise what they're up to. (i.e. DJAMMA!!!)

Gucci means, not a fancy Italian fashion house, but "Good shit" - cool - nice. Used by teenagers and wannabees to describe something that they think is, as the word implies, good shit.

Derived from the Icelandic "rólegur" which means calm down and the English "relax". You might think everyone is talking to you about your fancy watch but what they're really saying is  "calm down." Mostly used by people thinking that they know how to talk to teenagers, but don't.

Some sort of exclamation or term of addressing someone. A transformation of "Sæll vertu" which is a form of greeting to a male interlocutor. This term is used a lot by hnakkis who will probably tire of it, just as they tire of almost everything except football.

This one is pretty self-explicatory to our English speaking readers and is a term for "girlfriend". It's mostly used by young Icelandic women, who carry a spraycan in their back pocket and somehow think they belong to US rap culture, to describe their female friends. "Djamma með ma'bitches" is an example (I'm going to party with my girlfriends).

This literally means "a latte-sipping woollen scarf". It's used about mostly men, but also women, to describe someone who is arty, left-wing, environmentalist and who lives in 101 Reykjavik. A derogatary term applied by more conservative Icelanders who live outside of Reykjavik, and a term also popular with the hnakkis. Other versions include "Lattelepjandi listamenn,"(latte-sipping artists)  and "Lattelepjandi miðbæjarrotta" (latte-sipping city centre rats).