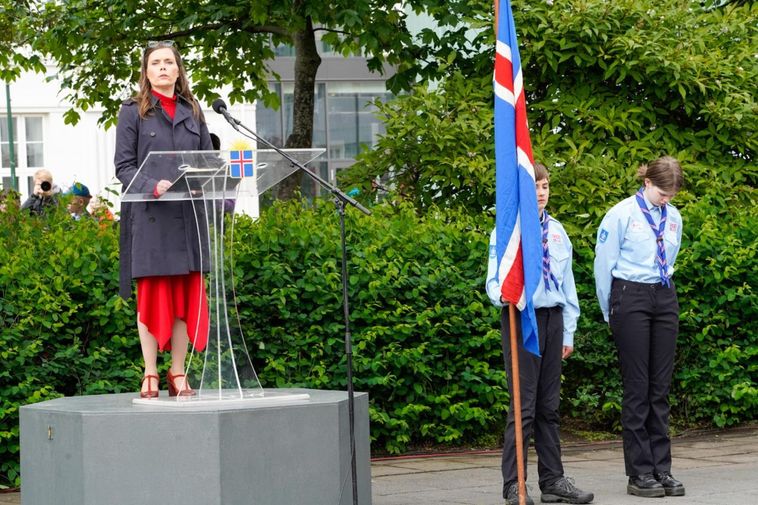 The Prime Minister of Iceland, Katrín Jakobsdóttir,touched upon many topics in her speech earlier today. Today marks the 78th birthday of the Icelandic Republic. Jakobsdóttir talked about the Covid 19 pandemic, the war in Ukraine and its financial impact on Iceland and the importance of democracy. She also talked about the local elections last month and Iceland’s policy in foreign- and defense matters.
"Just a year ago we were still battling the pandemic and we demonstrated what we were capable of, both as a society and the way our health care system managed the pandemic. In a very short time we are back in the regular way of living in a "Busytown" like the story I read as a kid. We are all having a lot to do in Busytown."

Argue endlessly about the smaller things

She also mentioned how Icelanders stand together when faced with natural disasters, but in smaller matters they "argue about almost every little thing."
She also declared Iceland’s unfaltering support for Ukraine.
"There are talks about Iceland reconsidering their security- and defense issues and of course this is the job of every sitting government at any time. Today the National Security Council is looking into Iceland’s defense policy and conducting a new risk assessment. We are expecting their conclusion later this year."

Voice of peace and disarmament

She also stressed that the foreign policy of Iceland is clear. Iceland is and will be a country without an army, that bases its sovereignty on the respect for international laws and an active cooperation with other countries. She also talked about Iceland being the voice of peace and disarmament, which is important in this day and age when many countries want to increase their military spending.

She also warned about the crisis in food production in the world. “We can see increased inflation and the possibility of a recession which can be the terrain for populists to rise, bringing simple answers to complicated issues.”

Important to keep the balance

She said it was important to face that energy, food and water and the access to land pose political challenges for Icelanders.

"The energy resources we possess in the country is a part of our sovereignty. We want to secure the change or engergy resources in order to fight climate change. It is the job of us politicians to secure that the change is in line with our ecological goals at the same time as they serve to enhance the prosperity of the Icelandic public." She stressed the importance of finding the right balance when it comes to our energy resources.

She also mentioned that never before have fewer homes had to battle poverty, but at the same time it was important to put emphasis on housing because that is the biggest factor in enjoying prosperity of most families in the country.

On an upbeat note, she talked about Iceland having great opportunities in the intellectual property sector.