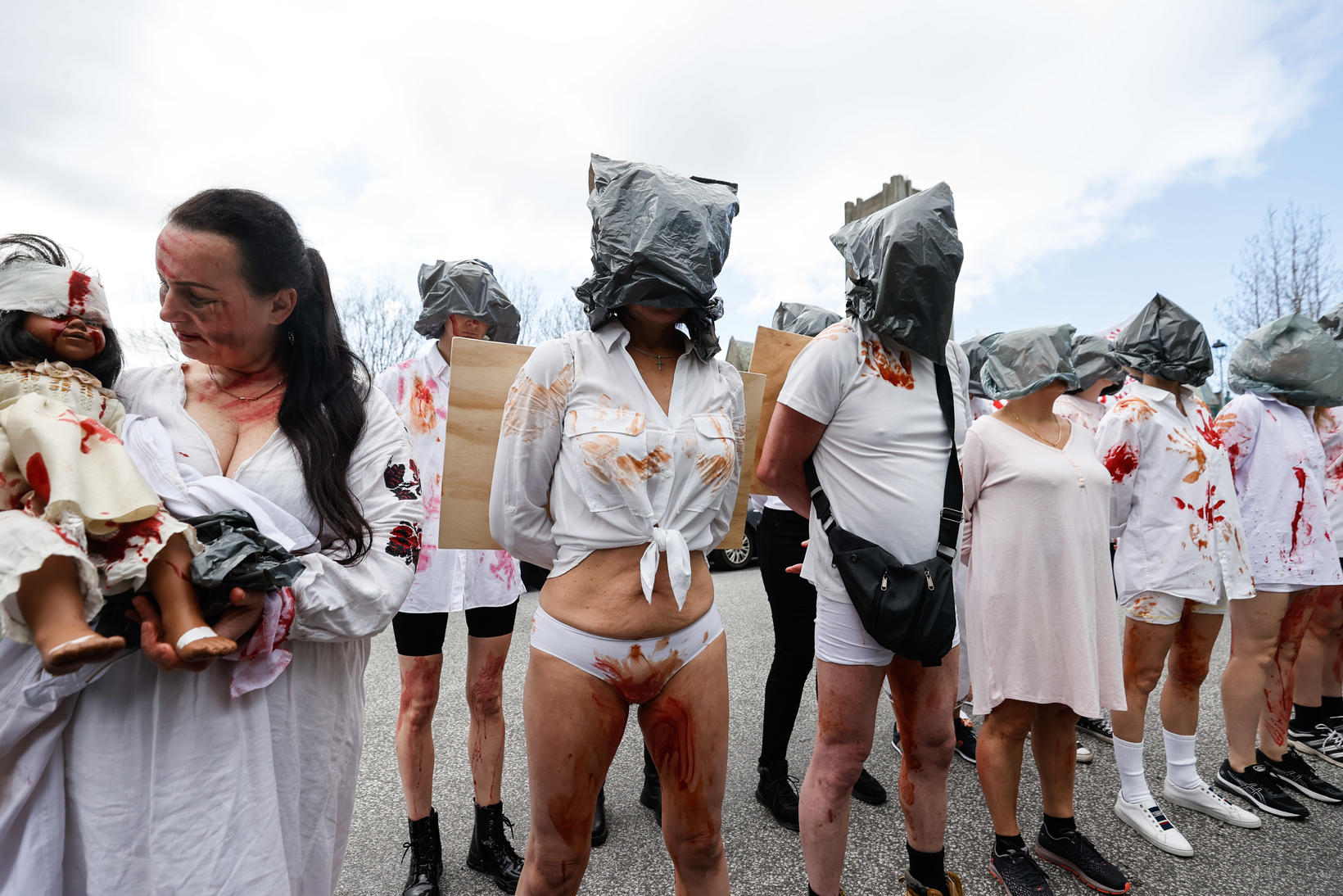 Protesters gathered in front of the Russian embassy in Túngata at noon today, in a very visual and bloody protest. The protesters were wearing white clothing, sometimes just underwear and used red paint to give the impression of blood. 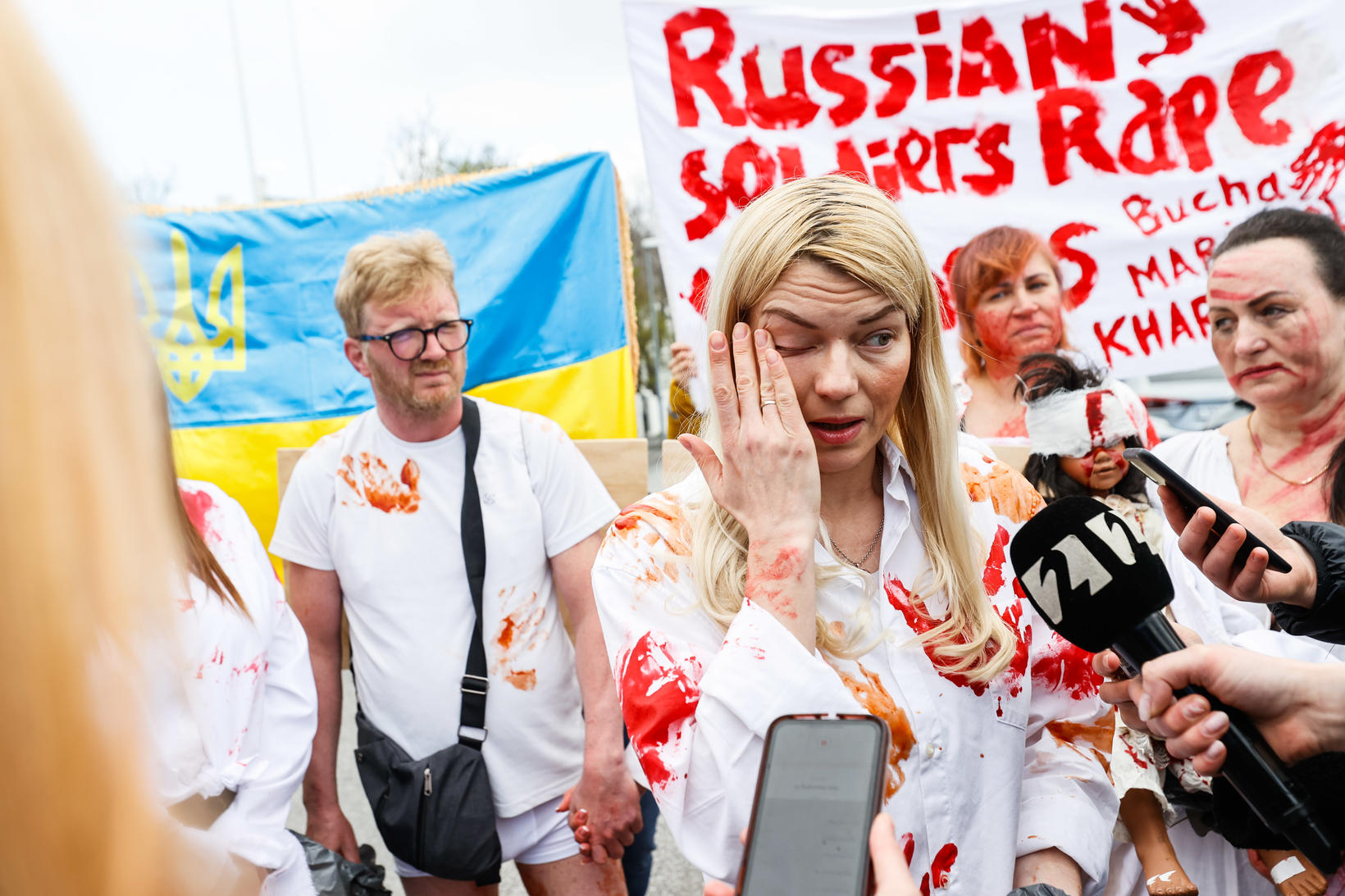 Some of the protesters also had plastic bags over their heads, indicating tortures of war. 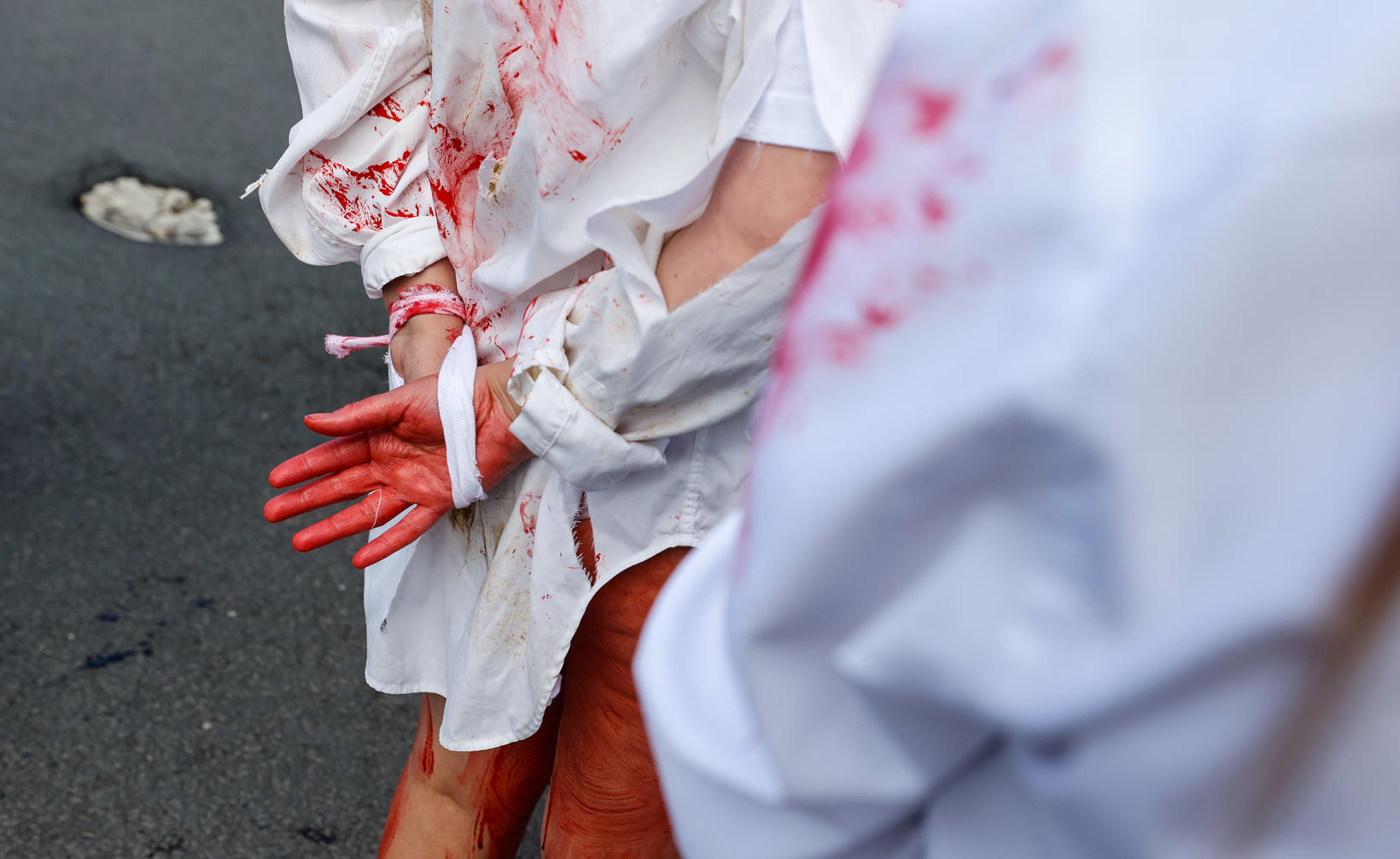 The purpose of the protests was to graphically demonstrate the violence and sex crimes that Russian soldiers have committed against the Ukrainian people since their invasion in February.

Around 20-30 people participated in the protest, most of them were Ukrainians, but there were also Russians and people from Poland. 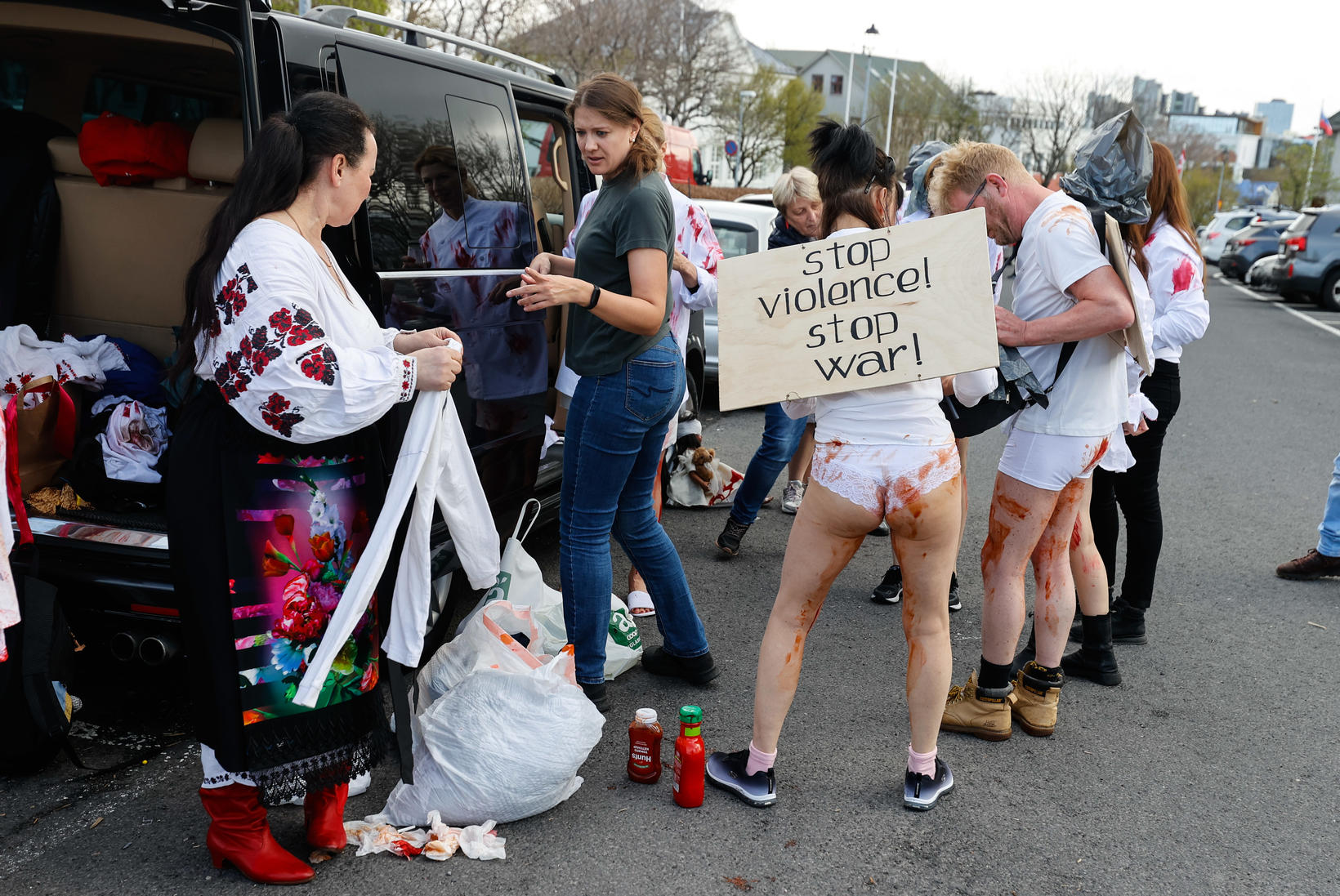 The Icelandic police was on alert because of the protests and part of Túngata was closed today. The protest was more visually shocking than violent and the police did not have to interfere with the peaceful protesters.

Just before the protests in front of the Russian Embassy downtown, Russians living in Reykjavík gathered in Fossvogur Cemetery to celebrate Victory Day, but every 9 th of May the Russian nation celebrates their win in World War II. The Saint Nicholas Russian Orthodox Church in Iceland was responsible for the event. 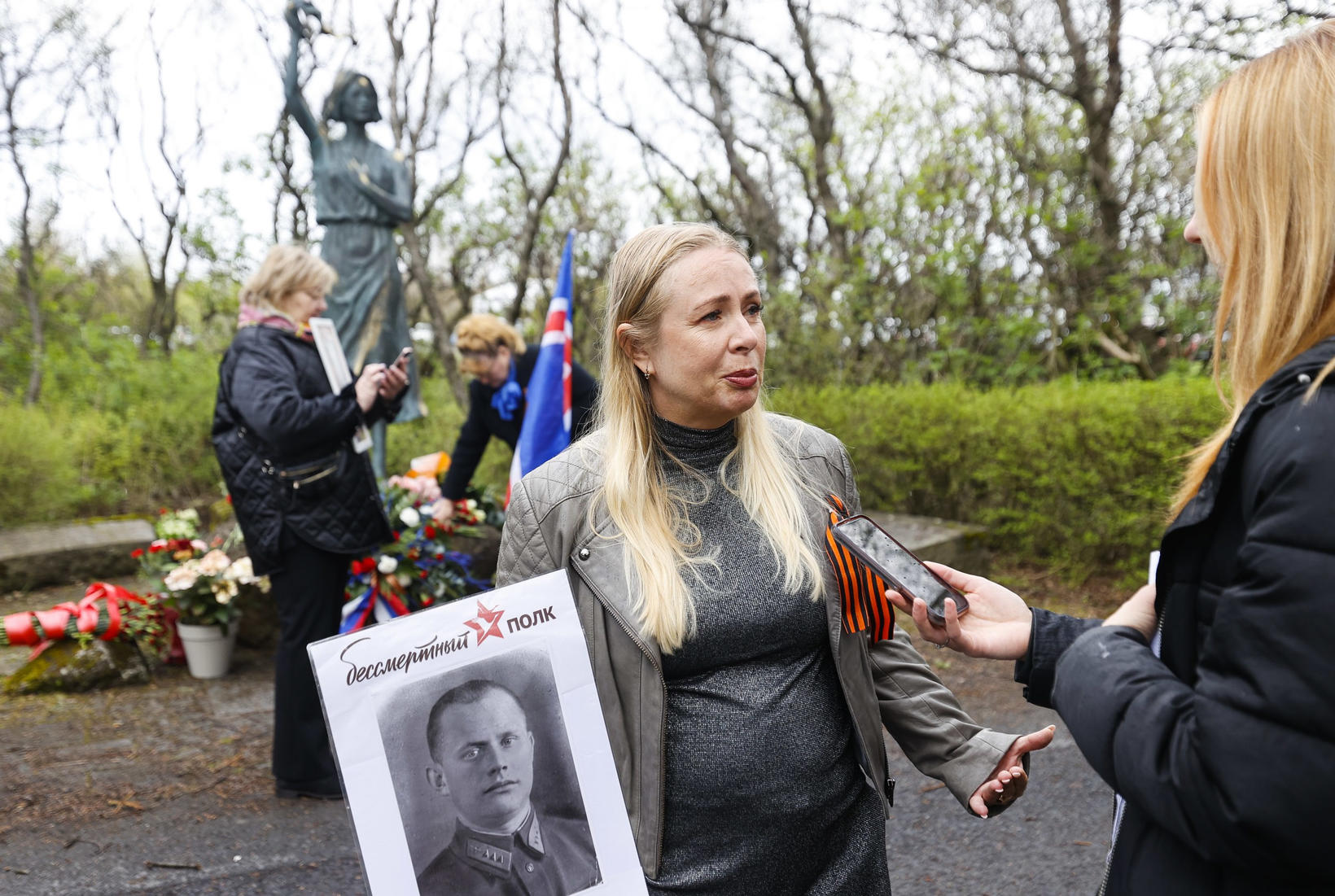 Only a few people were present, but this day usually draws quite a crowd. Anna Valdimarsdóttir was one of the people organizing the event. She says 9 th of May is a day of great importance to everybody from the former Soviet Union. In the cemetary’s parking lot some protesters had gathered with signs condemning Russia’s invasion of Ukraine. The police was present to make sure nothing got out of hand. 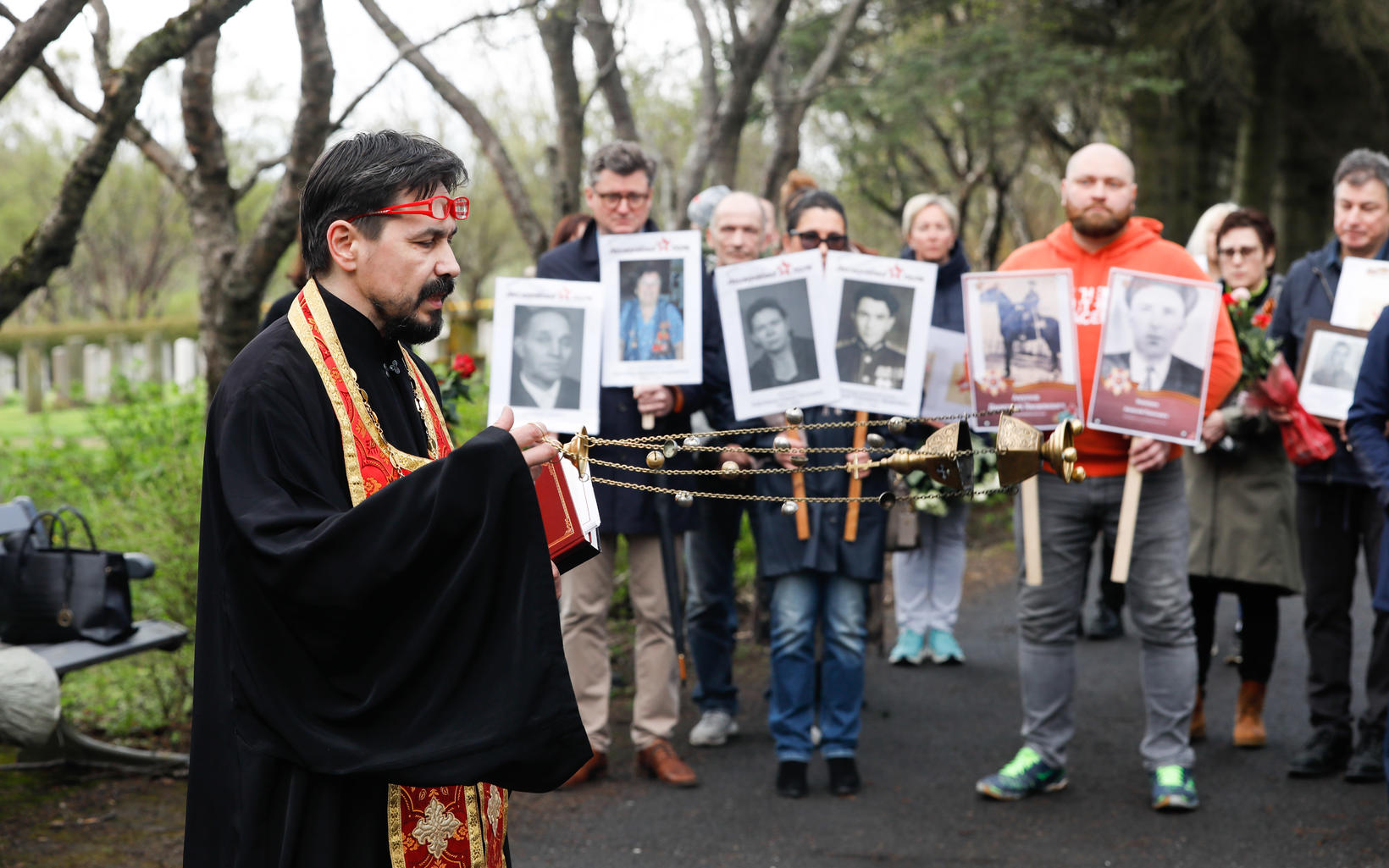 The Saint Nicholas Russian Orthodox Church in Iceland was responsible for the event today at Fossvogur Cemetery. mbl.is/Eggert Jóhannesson

“This is the day that World War II ended and we see it as the day Europe was victorious over Nazism,” says Anna and adds that this day has a symbolic significance for others than Russians. “Today we celebrate the victory of all of the nations fighting the Nazis and honor the memories of the young men who gave their lives in order for us to be able to live our life in peace like we do today.”

When asked if she had not expected protests she said that not everybody knows the history. "People can misunderstand this event which is very sad, but we know the meaning of this day. If anything, I am amazed at how few people came out to protest, but that means they’ve read about this day and know the meaning of it for all of Europe. It is a day that symbolizes hope. All wars are bad, but they all end in peace. Good always conquers evil.”