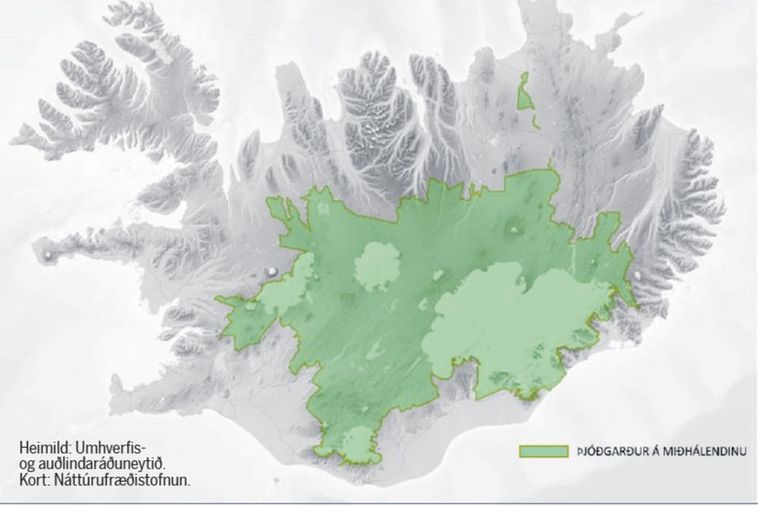 The suggested area of the central highlands park is shown in green. .
Vala Hafstað
vala@mbl.is

The establishment of a national park in the central highlands of Iceland is under discussion. A cross-political committee, which has been working on the preparation of its establishment since spring of last year, turned in a report on the matter yesterday to Minister for the Environment and Natural Resources Guðmundur Ingi Guðbrandsson. The committee worked in accordance with the government agreement, which calls for the establishment of such a park.

“These suggestions are a milestone in nature protection in Iceland,” Tryggvi Felixson, director of Landvernd, the Icelandic Environment Association, tells Morgunblaðið, speaking of the report.

“I would have liked to see certain areas on the periphery of the highlands being within the park,” he adds, “and the question remains how much power sparsely populated municipalities should have regarding the direction and planning of national parks, given that they are the common property of all Icelanders.”

The central highlands cover 40,000 km2 (15,400 sq mi), 85 percent of which is public lands. The park would include those public lands, as well as nature reserves.

The minister for the environment plans to present a draft bill in parliament this spring, based on the committee’s suggestions.

“A national highlands park will be a unique national park in the central highlands of Iceland, where one of Europe’s largest wilderness areas is located,” Guðmundur Ingi states.

New National Park to Be Established?